On Thursday afternoon, Tiger Woods begins his hunt for his 4th U.S. Open victory — nearly two decades after his first. The win in 2000 — featuring a ferocious, baby-faced assassin — sent ripples through the sport he would own for the foreseeable future. Winning this one, though under entirely different circumstances, would send those ripples all the same.

He sits at 10/1 odds to win the tournament, according to GolfOdds.com, behind only Dustin Johnson (7/1) and Brooks Koepka (8/1). A win at the friendly confines of Pebble Beach would send a message: Augusta was not a one-off, and Jack Nicklaus’ record is firmly in play.

“If I keep progressing how I am physically and how I’m getting better and better physically the last couple of years, I just need to give myself chances [at the record],” Woods said Tuesday “Hypothetically, let’s say I give myself 10 years. That’s 40 major championships. That’s a lot of majors.”

But before we discuss the implications of a potential 16th major title come Sunday night, let’s look back on his prior three U.S. Open victories, which sit among the most defining moments of his career. There was dominance, persistence and perseverance. Each of the three tells a tale of a different phase of Woods’ career, but all help construct the career arc of one the greatest athletes in history.

There’s jarring, there’s earth-shattering, and then there’s what Tiger Woods did to Pebble Beach at the 2000 U.S. Open. When he walked off the course on Sunday, Woods left the golfing world needing to pick its collective jaw off the floor and figure out what to do about a guy breaking the sport.

And the tournament was essentially over the moment he stepped on the course. He carded a 65 in the first round and continued to climb up the leaderboard. By Sunday, he was competing on his own. Woods won by 15 strokes. On a course that gave everyone else fits, Woods played the first 22 holes bogey-free and finished the final 26 unblemished. Name a record, he likely set it — largest 36-hole lead (six strokes), largest 54-hole lead (10), largest margin of victory (15), most strokes under par (12). It was his 12th win in his last 21 starts.

“Tiger has raised the bar,” Tom Watson told GOLF Magazine at the time, “and it seems that he’s the only guy who can jump over that bar.”

“If he doesn’t win the British Open,” added Sir Michael Bonallack, “there should be a steward’s inquiry.”

No such inquiry would be necessary, as Woods won the British a month later by eight, completing his career grand slam at the age of 24 and continuing what seemed at the time to be an indomitable march to Nicklaus’ record for wins in a major.

Woods’ performance at Bethpage in 2002 was one all-too familiar to golf fans by then. His opening-round 67 placed him atop the leaderboard, a spot he didn’t relinquish on the way to his eighth major championship. With the New York crowd blood-thirsty for drama, Woods did not oblige, marching through the tournament with workman-like efficiency. Mickelson finished three shots short, but at no point in the last 16 holes was the margin closer than that. And the result dropped Mickelson to a staggering 0-for-40 in majors to that point.

For Woods, though, business as usual continued to produce the unusual. The win marked the first time in 30 years a Masters winner followed it up with a win at the U.S. Open. With his trademark tenacity and touch of flare, Woods stamped his seventh major in the previous 11 attempts. The win bookended a three-year run that remains possibly the most dominant stretch in golf history (or any sport, for that matter).

“He’s got 20 years ahead of him. There’s no telling what he can accomplish over the next 20 years,” said Jeff Maggert, who finished 3rd. “Maybe more than that. He might be winning tournaments when he’s 60, who knows.”

This was Peak Tiger, continuing to defy the pre-existent norms of the sport. And at just 26 years old, he was just getting started. 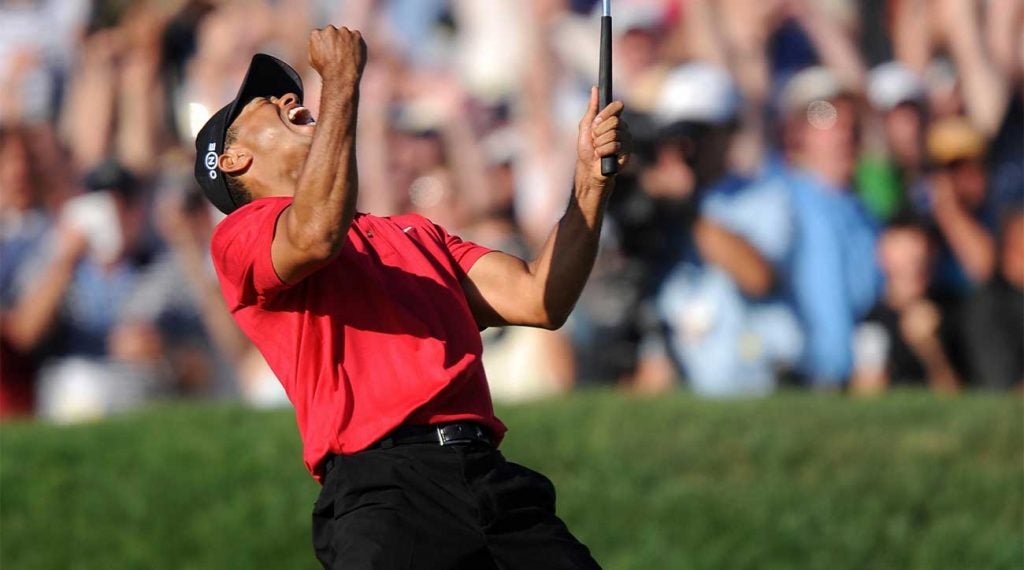 There was no doubting Tiger.

When the doctors told Woods they recommended he sit out the U.S. Open in 2008, he was having none of it. When he double-bogeyed No. 1, then figuratively and literally limped to an opening-round 72, he did not quit. And when he needed to make a 12-foot putt to force a playoff with Rocco Mediate, everyone knew what would happen next.

As Woods stood over the 12-footer, Mediate looked on. He watched Woods hit the putt, slowly creep backwards and thrust his arms in the air when the putt dropped in off the right edge.

“Expect anything different?!” exclaimed Dan Hicks on the broadcast.

In the end, a hobbled Woods emerged victorious in one of the most memorable weeks in golf history. Woods downed Mediate in a sudden death 19th hole on Monday, after each shot 71 on the first 18. It’s difficult to single out the “best” moment of Woods’ career, but the 2008 U.S. Open was his most resilient.

Days later, he had arthroscopic surgery to repair the ACL in his left knee, an injury that would keep him sidelined for nine months.

After the win, Woods tried to size up the moment in the scope of his illustrious career. Little did he know at the time, it would be the last major he would win for 11 years.

“I think this one is the best,” he told reporters, “just because of all the things I had to deal with.”