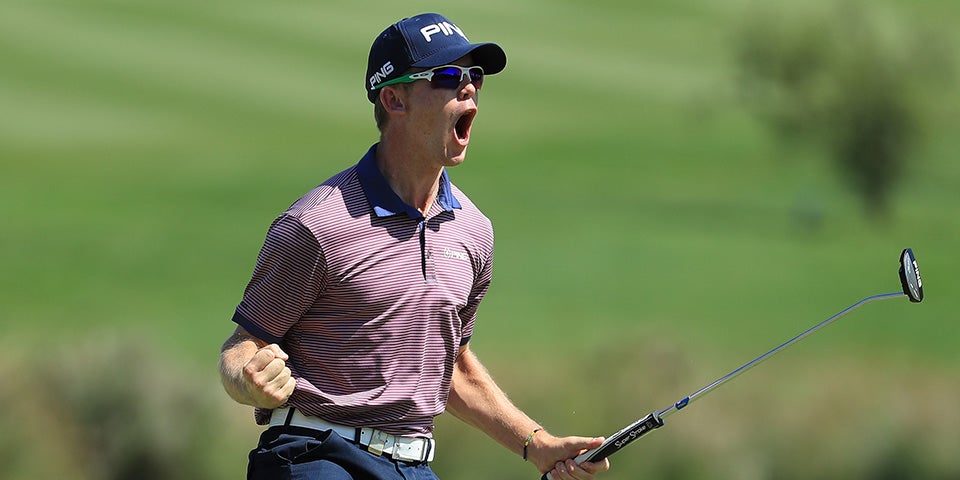 Brandon Stone celebrates victory on the 18th green during the final round of the 2016 Alfred Dunhill Championship at Leopard Creek Country Golf Club.
Richard Heathcote

MALELANE, South Africa (AP) — Brandon Stone ran away from his challengers to win the Alfred Dunhill Championship by seven shots on Sunday for his second European Tour title.

Stone finished with a 5-under 67 at Leopard Creek Country Club for 22 under overall, extending his advantage over the chasers after going into the final round three shots ahead.

Stone made seven birdies and two bogeys and it was a comfortable victory in the end for the 23-year-old South African, who followed up on his maiden tour title at the South African Open at the start of the year.

Richard Sterne was second on Sunday after matching Stone’s 67, and Belgium’s Thomas Detry was third, two shots behind Sterne.

Stone was put under early pressure by playing partner and defending champion Charl Schwartzel, who made three birdies in the first six holes to draw level with the overnight leader.

The tide turned at No. 7 when Stone made birdie and Schwartzel a bogey. Four-time winner Schwartzel later slipped up with a triple-bogey and a double-bogey on Nos. 15 and 16 to finish tied for fourth.

Stone, meanwhile, made five of his birdies on the back nine, beginning when he holed his shot out of the bunker on No. 10.

“I just played some incredible golf the whole week,” said Stone, who shrugged off a back problem midway through the tournament. “I think my ball striking this week was superb from the first hole to the last.”

The European Tour is in full swing again, just two weeks after Henrik Stenson won the 2016 Race to Dubai title. The Alfred Dunhill Championship and the Australian PGA Championship, which also ended Sunday, are the first tournaments of the 2017 season.

Harold Varner III closed with a 65 to win his first European Tour title at the Australian PGA Championship.