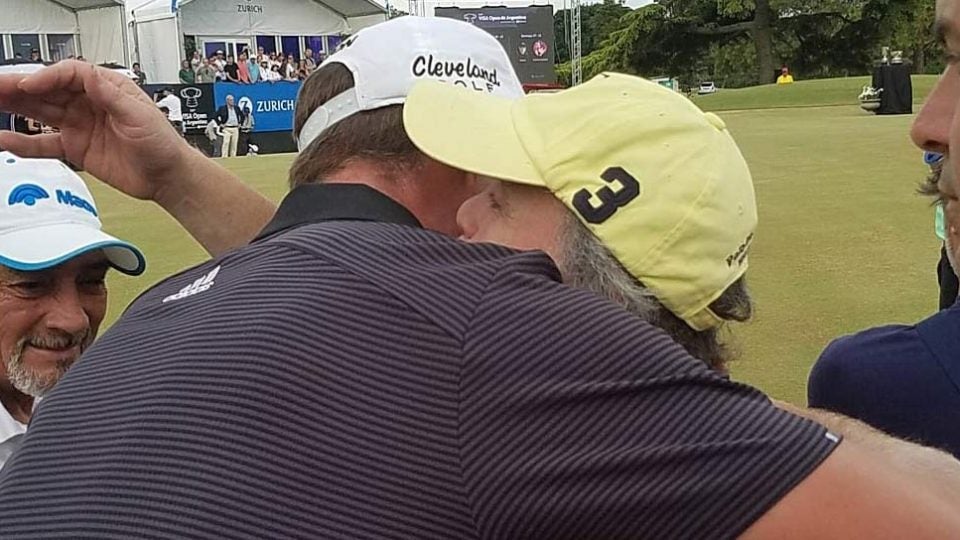 As Brandon Matthews stood over an 8-foot putt to extend the sudden-death playoff at the PGA Tour Latinoamerica’s 2019 Visa Open de Argentina, where the winner would earn a spot in this summer’s Open Championship, a middle-aged fan with Down syndrome got excited and made a loud noise during Matthews’ backstroke, causing him to miss.

Matthews was frustrated at first. But after a tournament official explained the fan’s disability, Matthews went out to the crowd and gave the fan a signed glove and a big hug — a moment that quickly made the rounds on social media and beyond.

The family of the late Arnold Palmer and tournament officials from the Arnold Palmer Invitational were so moved that they extended Matthews a sponsor’s invitation to Bay Hill next week. On Thursday, the event’s Twitter account said Matthews responded “just as Mr. Palmer would have — with kindness, humility and grace.”

What an incredible honor to be able to get the chance to compete in the @APinv as my first PGA tour event. Words can’t describe how grateful I am for this opportunity. I cannot wait to tee it up next week! Thank you to everyone for the incredible support as always. https://t.co/BJqifniHoZ

Matthews, a native of Pennsylvania like Palmer, was touched by the comparison and honored to be making his PGA Tour debut in the King’s event.

“To be even mentioned in the same light as Mr. Palmer is overwhelming and truly humbling,” Matthews told GOLF.com from Florida. “He was the epitome of sportsmanship in our game and, really, of all sport.

“To compete in his event, to make my PGA Tour debut at Mr Palmer’s tournament, with he and I being from Pennsylvania, is really special.”

Matthews said his moment with the fan was “a natural reaction.” Matthews’ mother, Donna, managed group homes while he was growing up. His best friend’s sister also had Down syndrome.

“I understand how great people with disabilities are and the struggles they go through, because I saw it every day of my childhood,” Matthews said.

“I felt pretty bad at myself [in Argentina], and I was frustrated that I didn’t understand sooner. But hopefully he is a golf fan for life now. It’s easy to be kind, to make people feel good. It’s so rewarding I don’t know why people don’t do it more often.”

That Matthews was even in contention to win that PGA Tour Latinoamerica tournament was an achievement in itself. A Temple grad who turned pro in 2016, Matthews made just four cuts in 21 events on the Korn Ferry Tour in 2019. He made just $8,215.

Given his extraordinary physical gifts, Matthews was disappointed. At 6-foot-4 and 210 pounds, Matthews annihilates the ball. So, he engaged swing coach, Dale Gray, last summer. Gray, an Australian based in New York City, is a Hank Haney disciple, having studied under him in Dallas for more than 10 years, including during Haney’s six-year stint with Tiger Woods.

Gray first met Matthews on the range at the Country Club of Scranton last year and was instantly blown away by his speed.

“We’re talking a swing speed of 130 mph, ball speed of 190 mph and an average carry distance of 350 yards. I was gobsmacked,” Gray said. “There was so much raw ability that you just can’t teach.

“The swing changes I suggested were about getting rid of his big miss; he used to have a big block to the right. He used to take the club back way on the inside, roll the face open and the club would get across the line at the top. To compensate, his arms would outrace his body turn and so he’d re-route the club in transition. He had an early extension and would almost stand up out of his posture through the hitting area.

“At 130 miles an hour, when you miss one, it’s going to shoot a long way off line. So, we’ve worked on getting the club more on plane and a bit more laid-off at the top, to give him some depth and width. Now, he can use his long levers to his advantage.”

News
The 7 best things from the Arnold Palmer Invitational at Bay Hill, ranked!

The changes began to pay off on the Latinoamerica circuit during the fall. Matthews tied for fifth at the Argentina Classic and then was runner-up in Argentina.

“From how I was playing to how I’m playing now, it’s night and day,” Matthews said.

Now, he’s hoping he’s got all the tools to compete with the PGA Tour elite at the testing Bay Hill next week. With his length, Matthews feels he could get after the 7,381-yard Orlando-area course.

“It sets up for me, but you have to respect Bay Hill and take advantage of some holes and back off others,” Matthews said.

“One good week can change a career. If I can put my absolute focus into next week, I think we could make it the start of a great career.”