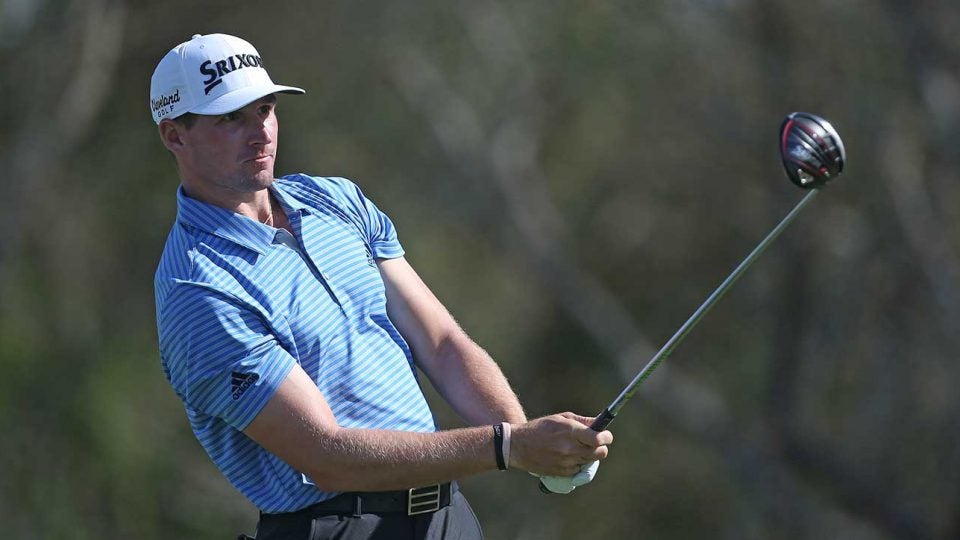 Brandon Matthews didn't win over the weekend, but he caught the attention of the sports world for another reason.
Getty Images

These are contentious times. The President is live-tweeting his own impeachment hearings, stoking a divide between Americans that has rarely been more pronounced. Sports does not provide refuge. One of the most discussed quarterbacks in football hasn’t played a down in three years, and fans across the political spectrum remain infuriated by both his absence and his presence. The most successful baseball team of the last few years recently slimed an honest, hard-working sportswriter and is now embroiled in a sign-stealing controversy that threatens to overshadow its formerly feel-good World Series win from a couple of years earlier. Even the gentleman’s game is not immune to the unpleasantness, with millionaire players stiffing their blue-collar caddies, bought-and-sold golfers shilling for authoritarian Mideast regimes and Sergio Garcia destroying innocent greens, bunkers and tee boxes.

With all of this as a backdrop, what happened last Sunday at the Open de Argentina was particularly welcome. Perhaps you’ve heard about it. Brandon Matthews, a 25-year old American coming off the worst stretch of golf of his young career, was locked in an entertaining dogfight with Ricardo Celia, a dashing Colombian who was being propelled by a large and boisterous crowd. They were paired together in the final group. On the 72nd hole Matthews stuffed his approach to a foot, a second straight birdie to close the round. Celia stepped up and hit his shot to six inches, giving him four birdies in the final five holes. On the first playoff hole Matthews seemed to have the advantage when he flagged another approach, to eight feet, but Celia drained a 30-footer. How long could perfect golf be played? Matthews needed his birdie to extend the playoff. He was in the middle of his putting stroke when a fan yelped. Matthews flinched and missed his putt.

Just like that, he lost a tournament with one of the richest histories in golf, dating to 1905 and featuring a roll call of winners including Paul Runyan, Jimmy Demaret, Lloyd Mangrum, Tom Weiskopf, Jim Furyk, Mark O’Meara, Angel Cabrera and Roberto de Vicenzo (nine times!). To add injury to the verbal insult, the winner of the Open de Argentina earns an automatic exemption into the 2020 Open Championship, the kind of opportunity that can change a career. In the scoring tent Matthews was understandably frustrated and upset. He had struggled with his swing and attitude throughout 2019 on the Korn Ferry Tour, at one point last summer missing the cut or withdrawing in 11 straight tournaments. Demoted to the Latinoamerica Tour, Matthews desperately needed the win in Argentina. He was stewing about the finish when a tournament official explained to him that the fan who had disrupted his putt suffers from Down Syndrome. In that moment everything changed. “Take me to him,” Matthews said. His best friend growing up had a sister with Down Syndrome and Matthews is well-attuned to the challenges faced by those with the genetic disorder.

This 6’4” innocent abroad spoke tenderly to the fan and pulled him in for a hug. He signed his glove as a souvenir. It was a display of tremendous empathy and humanity. Matthews then headed to the airport and a long redeye home to Florida.

While he was in the air all heaven broke loose.

Rules
In rare rules decision, Russell Henley learned a lesson for all of us: call yourself on it!

The all-knowing Twitter handle Monday Q Info (@acaseofthegolf1) first tweeted about Matthews’ touching gesture. In these dark times, the story quickly went viral. Mathews landed in Miami in the wee hours of Monday morning and began driving home to Tequesta, Fla. “That’s when my phone started going a little crazy,” he says. Calls, texts, emails, social media notifications — the little bit of goodwill Matthews had put into the world snowballed into an avalanche of support and appreciation. Reporters interviewed him for stories. Old friends checked in. His mom Donna, who worked for Goodwill Industries managing group homes, was besides herself with pride. On Monday night, Scott Van Pelt gave Matthews’ good deed a national audience when he featured it for his popular “One Good Thing” segment on ESPN’s SportsCenter. All because of a missed putt. “I guess we don’t see feel-good stories as much as we should in the media,” Matthews says. “I was glad I could be a small part of making people feel good.”

On Twitter, a movement grew for Matthews to be rewarded with an exemption to the Open Championship. He appreciates the support but does not endorse the idea. “I don’t want anything out of this for me, not exemptions, not endorsements,” Matthews says. “But I am glad it happened to me because I was able to make that guy feel as good as I did. That was what was important to me: making sure he felt good about his day, making sure his family left with positive feelings and that they all remain golf fans for life.”

As it turns out, good things happen to good people. After his rough summer, Matthews had huddled with friends and family and reset his priorities and approach to the game. He began working with a new coach, turning a handsy action into a more reliable and repeatable swing. In Argentina he played basically flawless golf, making only one bogey over the final 45 holes. His runner-up finish secured playing privileges on the LAT for 2020. Wherever Matthews goes from here he will always be a fan favorite. Asked why he thinks his story has touched the hearts of so many, Matthews says, “I’m not really sure. I would hope that anyone in that situation would do the same as I did. I do know this: it would be a helluva lot better world if this kind of thing happened all the time and was not looked at as a big deal.”