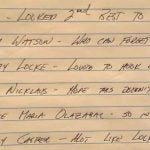 Brad Faxon shared his list of the best putters of all time this week.

Sports fans are obsessed with rankings, and golf is no exception. Determining who bests whom in a skill category gives a framework for what happens between the ropes. Without these arguments, the game stops when the final putt drops each Sunday night.

Jack vs. Tiger is a popular debate among pundits. Are 18 majors worth more than 82 PGA Tour wins? How much does the era each man played in factor into this discussion? Will we ever get definitive answers to these questions? Unlikely. But that doesn’t mean it’s not fun to ponder.

Count Brad Faxon among those entering the rankings debate. However, instead of getting tangled in the messy Jack-Tiger discussion, he stuck to a subject he’s a bit of an expert on — putting.

Faxon, who was perennially one of the best putters on the PGA Tour during his eight-win career, released his (hand-written!) list of top-10 putters of all time, and although it contained some noticeable omissions (he only ranked male golfers on his list), it’s still a worthy crop of candidates.

Check out the top Faxon’s top 10 below.

Although McIlroy has four majors to his name, he’s only ranked inside the top 40 on Tour in SG: Putting once in his career. Maybe Faxon sees something everyone else doesn’t?

Jones played long before anyone had ever heard of advanced analytics, so there aren’t many stats to back up his place on the list. But with 13 majors on his resume, it’s likely a worthy spot.

Casper was a three-time major winner and ranks seventh all time with 51 PGA Tour victories. Plus, anyone mentioned in the same breath as Bobby Locke is doing something right.

“So intense and simple.”

Simple is always a compliment when it comes to golf.

“Hope this doesn’t insult him.”

Most would rank Nicklaus higher on a list like this, but there’s no debating his spot as one of the all-time greats.

Locke coined the phrase “drive for show, putt for dough,” and that philosophy helped him win the Open Championship four times in his career.

Faxon is of course referring to the 1982 U.S. Open at Pebble Beach, where Watson held off Nicklaus with some brilliant putting to claim his only U.S. Open win.

Ballesteros’ touch around the greens was always his calling card, and those skills served him well on the greens, too.

“Looked the best doing it.”

Few would argue with Crenshaw’s place on this list. His languid stroke is still considered among the best of all time.

“Made every putt he had to.”

There are many assets that make Woods great, but his ability to will the ball in the hole at the biggest of moments might be his greatest.