Baltusrol Proving to Be Ball-Striker’s Course at PGA Championship 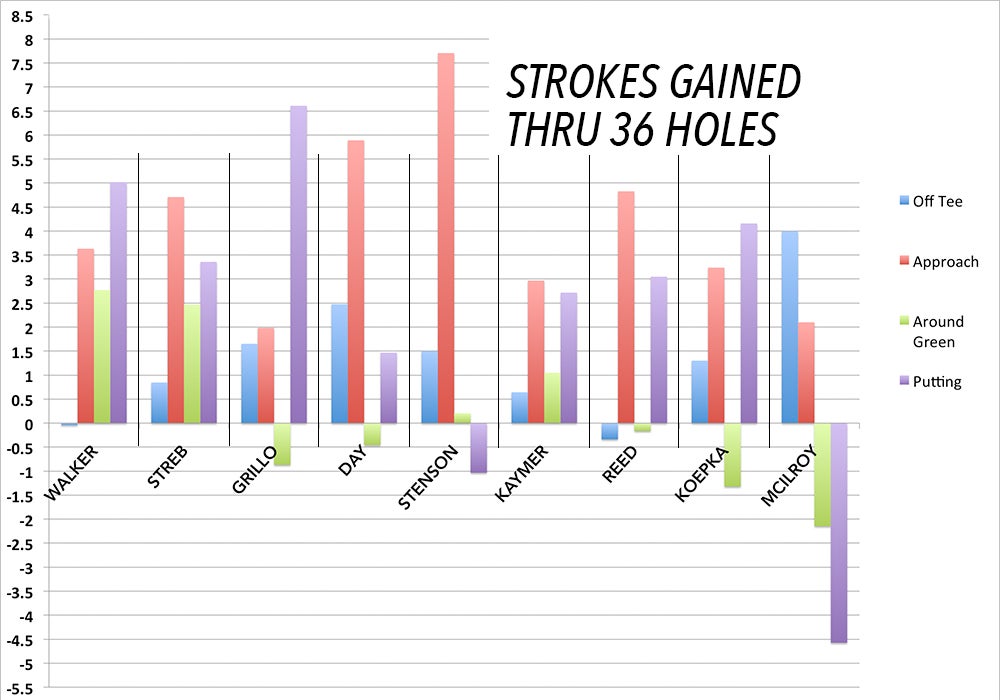 The best players at Baltusrol for this PGA Championship have largely been great ball-strikers.

All it means is they believe the best players in the world at approaching the green, be it from the fairway, rough, fairway bunker, etc. will flourish here in tree-lined suburban New Jersey.

A glance at how the best players this week are getting it done will prove exactly that. Leaders Jimmy Walker and Robert Streb have been very good in their general ball-striking to these receptive Baltusrol greens, as evidenced by their red bars in the chart below. Walker has been 12th-best through 36 holes, and Streb a bit better at ninth-best.

Of course, it doesn’t hurt to putt well, and both couldn’t sit where they are on the leaderboard without also gaining three-plus strokes on the greens. The compelling part for a viewer might just be that they know exactly where they’re succeeding.

“The ball-striking and the putting has been a little difficult this year,” Streb said after his round. “Obviously it’s coming together this week, which is nice.”

“I feel like I’m striking my irons well,” Walker chimed in. “Been chipping and putting nice, too.”

Spot on, Mr. Walker. Baltusrol is rewarding ball strikers, and that is validated again by Jason Day, Henrik Stenson and Patrick Reed. While Day has been third-best in the field, and Reed has been seventh-best, Stenson has been put on a clinic, gaining an alarming 7.7 strokes approaching the green. It’s what he does, ball-striking, but even that number is impressive.

Stenson’s putting at Baltusrol has been Stenson’s putting just about everywhere: average. But the Swede might be setting himself up for another magical weekend where some long putts — like we saw at Royal Troon — actually fall.

As 156-player tournaments tend to display, there are many ways to succeed in this game, not just ball-striking. Emiliano Grillo, just two shots back, is the perfect example.

Grillo has gained more than 6.5 strokes on the field just in his putting, far and away the best of the field, after consecutive days holing 100-plus feet in putts.The danger for him rests in his season averages.

He typically gains strokes off the tee and approaching the green. He also typically loses them around the green AND, most importantly, ON the green. If his typical form resurfaces this weekend at Baltusrol, Grillo could be in for a fall down the leaderboard.

With all this in mind, it is worth noting Rory McIlroy’s polarizing 36-hole performance, where he bogeyed the final hole to miss the cut by one stroke. McIlroy was plenty good with his iron-game, gaining 2.1 strokes approaching the green.

The 27-year-old’s driving was phenomenal (third-best Thursday and fourth-best Friday), setting him up for a great week had he been anything close to normal on and around the greens. The No. 4 player in the world lost 2.1 strokes around the green and 4.5 putting. Those are areas of the game McIlroy typically doesn’t dominate, but a short game performance like the one he turned in this week will keep him shy of the cutline just about anywhere. He knows it, too.

“My tee to green game, there’s not much wrong with that,” McIlroy said after his round. “It’s pretty solid. Driving the ball well, hitting good iron shots. I think if you had to given anyone else in this field my tee shots this week, they would have been up near the top of the leaderboard. It just shows you how bad I was around the greens.”