#AskAlan mailbag: Why can’t Rickie Fowler close at the majors?

In the last few days we have welcomed a new national champion, Tiger dropped another personal bombshell​ and an earthquake rocked Augusta, but it was the Phil/Bones split that shook the golf world…

All will be revealed eventually, and I don’t really want to traffic in speculation. Let’s just take a moment to appreciate the partnership of Phil and Bones, two of the game’s great characters. They enriched the experience of being a fan with their nerdy strategy sessions and palpable brotherhood. There may never be another player-caddie combo like it again, with such a pair of outsized personalities, both of whom were willing to take us inside the ropes with their insights about the game. Phil and Bones will both be all right going forward, but I’m definitely going to miss watching them do their thing.

Does Rickie need a caddie more like Bones to manage him and veto Sunday decisions? Or is it a problem of execution not strategy? – Mike (@frantzy13)

Bones makes sense for pretty much any top player, though the Fowler-Joe Skovron partnership appears as solid as they come. (But like Hollywood marriages, there’s no way to know for sure.) Fowler’s Sunday struggles have become metaphysical. I talked to his swing coach Butch Harmon on Sunday afternoon at Erin Hills, right after Rickie finished his warm-up session and headed to the first tee. I asked if Fowler was better prepared for the final round crucible because of the hard lessons of Masters Sunday, which he entered one shot out of the lead, only to blow himself out of the tournament with a 76. “We learned from Augusta that he got a little anxious on Sunday because he wanted it so bad,” Butch said. “He just didn’t let himself relax and play. He started out trying to push early because he was so jacked up. It wasn’t nerves, it was anxiety. We’ve talked about it all week. He’s relaxed, he feels good. At this moment he’s playing the best he’s ever played. Now he has to go out and get the job done, and he knows that.”

It only gets harder from here, as the next time Rickie has a shot at a major he’ll have to block out the memory of all the loose shots and timid putts he hit at Erin Hills. I love the way Rickie carries himself; golf has no better ambassador. He has too much game not to break through at a major some day. Right? Where does JT’s Saturday 3-wood on 18 rank with the best shots you’ve ever seen? – Adam (@tildaddy)

It’s definitely up there, for the sheer wow factor of hitting a three-wood so high and so far and landing it so softly and because of the theater of the moment, coming on the 18th hole with a piece of history on the line. Even other players and caddies were in awe. I witnessed a funny exchange between JT’s dad Mike and Lance Bennett, Bill Haas’s caddie:

“Three-wood, three-wood to about six feet.”

“Ohmygawd. You’re kidding. Really? We just assumed he chipped it in or made a 50-footer. That’s crazy. Wow.”

All that said, I’m biased toward shots that happen on Sunday and propel a player to victory. I mean, if Thomas catches his three-wood heavy and puts it in the front bunker, he still shoots 64 and has a chance to win the Open. There is no such margin for error on Sundays. Anyway, off the top of my head, this is my list (and great putts is an entirely separate category):

8. Sergio Garcia’s eyes-closed escape from up against a tree at the 1999 PGA Championship

2. Bubba Watson’s snap-hooked wedge out of the trees in the playoff at the 2012 Masters.

Are young guns Jon Rahm and Thomas Pieters not as good as their hype? – S. Dunne (@warmheart_88)

Who’s to say? The hype is a tad overwhelming, especially for Rahm, but we don’t have enough of a sample size to make a judgment. Both are extremely intriguing prospects but we can’t begin to make a call on them for at least a few more years. 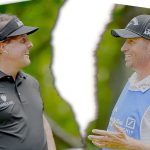 You may also like As Phil and Bones part ways, an appreciation of what made them so good together

Besides Bethpage, Torrey, and Chambers are there any other truly public/muni courses that could host a major? #AskAlan – Gus (@CCGabriel1)

By definition, these class of courses are meant to be played by average golfers, which is to say, crappy golfers. Deep bunkers, crazy greens, waste areas, forced carries, long fescue and the like are not user-friendly to the average 90s shooter. So, no, there really aren’t any other courses out there that are suitable. Erin Hills was built expressly for an Open and it just got torn to pieces, so that tells you just how hard it is to challenge today’s players.

Well, defining it as just a decade is somewhat limiting; Jordan Spieth and Brooks Koepka, among others, should still be going strong in 2030. If we say the more loosely undefined post-Tiger *era*, that allows for more wiggle room. But four majors is a very, very high bar: In the last two decades only Mickelson and Els have gotten there. In fact, since the founding of the Masters, only 19 players have won four or more majors. I can see Spieth reaching four. If Dustin Johnson plays at this level for the next 5-7 years, he has a chance. Martin Kaymer is a sleeper, only because he’s already halfway there. Otherwise, there aren’t many candidates.

I play to a 9 handicap, what’s my projected score at Erin Hills? – Zachary (@texasweeks)

From the tips, in a steady breeze? Throwing out equitable scoring, and no gimmes? 98.

Koepka has a huge head start, with one major already in the bag. But Matsuyama just keeps coming. Then again, Kim is six years younger than any of them. The thing is, so much depends on health and other unknown factors. After the 2015 PGA Championship, we all thought Jason Day was going to own the game. Now? Who knows. Kim has already had back problems. None of these guys are yet married with kids, so many life changes await. Trying to predict their long-term future is a fool’s errand. All that said, I’ll take Koepka.

Yes, at Erin Hills in 12 or 13 years. To never come back is to admit they screwed up in the first place, which the USGA is loathe to do. I’m sure they’ll tighten the fairways, and if the weather cooperates and the course is firm, fast and fiery it will be a monstrous test. And if not, Charlie Woods will go 20-under.