#AskAlan mailbag: Which pro would host the best podcast? 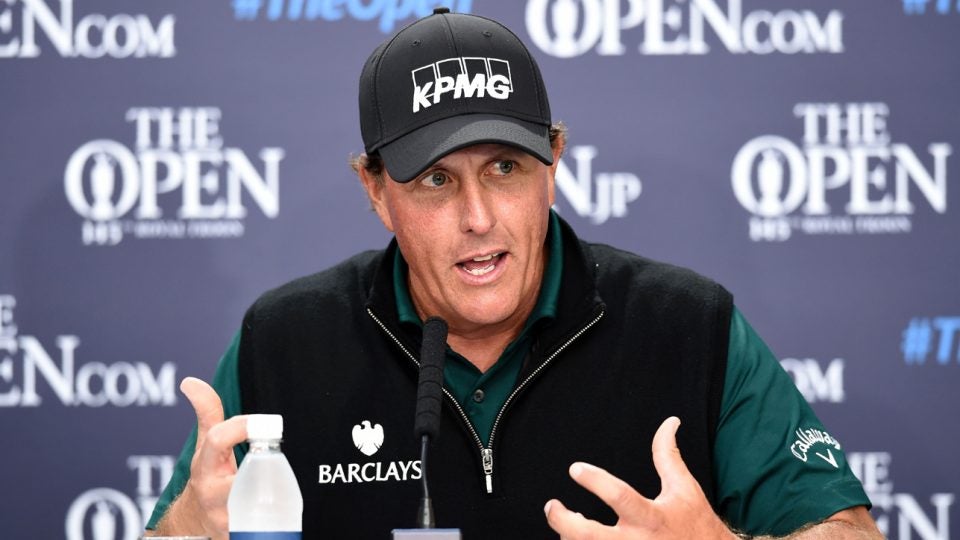 Having rallied after a nasty Masters-hangover, I am now back on the #AskAlan beat. Thanks as always for the excellent questions. Next week I head to New Orleans, so here’s a question for you: the over/under on the number of beignets I will eat is 37; which do you take?

“Do you sense real excitement from the pros for the new format at the Zurich Classic? Or is “whatever” the predominant sentiment? #AskAlan ” — @1beardedgolfer

Well, seven of the top 10 in the World Ranking are showing up to a pretty track, so you tell me. And checking out the new team-play format is a big reason why I’m going, too. The pros might enjoy the food and feeling of a given city but what exists between the ropes is what motivates them to play a given tournament. Clearly the format has already been a home run for the tourney.

“Why do pros give away important golf balls? Putt out to win a tourney, chuck it into the crowd; ace 16 at Augusta and give it away; etc.” — Jamie (@hencheese)

Clearly it is the recognition that they are humble servants of the fans. Or perhaps it’s a kind of offering to the golf gods, for bestowing upon them such good fortune. Or maybe when they were kids they wore orange polos and Gucci fedoras and they’re enjoying a kind of Rosebud moment. Also, they get the balls for free.

“Which player would you pick to host a golf pod you’d listen to?” — Kyle (@KylePorterCBS)

First choice has to be Phil, right? He’s a smartass, a trash-talker and has an opinion on everything. And he’s enjoyed a big life but revealed very little of it. Tiger is so analytical it would be awesome to hear his thoughts, if he could take the governor off. Padraig and Geoff Ogilvy are both intelligent, insightful anecdotal thinkers and either one would kill it. When Bubba begins a sentence he has no idea how it’s going to end, so to get half an hour of his stream-of-consciousness would be fascinating (and exhausting). And I’d love for Dustin to host one, for those times when I have trouble falling asleep.

I think we can all agree that today the professional game has deeper fields and much more highly-trained athletes, with an array of technology to help them maximize their performance. But in Sergio’s window, how many all-time badasses did he have to tangle with? Tiger, obviously. Vijay. Phil and Ernie, yes. Rory. I’ll give Padraig the nod. That’s six. Now let’s look at 1962-80: peak- Jack, Arnie, Player, Watson, Trevino, Billy Casper, Raymundo, Johnny Miller, Hale Irwin, and early-Seve. That makes 11, and your answer.

“Don’t you think TW could take 2-3 full years off to get healthy, come back and have a productive career? He’d only be Phil’s age. #AskAlan” — Dan (@djdonof)

Yeah, and maybe he can ride a rainbow to the first tee and have a unicorn as a caddie.

“Per your Tour Confidential answer about ditching work to play golf… do you typically/always bring your clubs with when heading to cover an event?” — Daniel (@danielpsulliv)

I’m not that old but I am a dinosaur: when I started at SI in 1994 there was no Internet and no cell phones. In those days we played an insane amount of golf on tournament weeks: Tuesday, Wednesday, Friday twilight, Sunday morning. Our bosses, significant others and readers had no idea where we were, and there was still plenty of time to produce the one magazine story that was due at the end of the week. Writing for the web (and social media) has killed all of that. Now every pre-tourney presser is treated like a news event, and saturation coverage is expected Monday-Sunday. I rarely take my clubs to majors anymore, because I know they won’t be used. I’ll still bring them along when working on a feature, as I can build a little free time to sneak away to a great course. Because one thing hasn’t changed: the readers have a right to know.

“How many majors does Spieth have when it’s all said and done?” — Caleb (@cjkonstan)

Given his track record at Augusta National let’s give him two more. A U.S. Open with tough, crusty greens will suit Spieth quite well, such as Shinny (’18, ‘26), Pinehurst (’24) or Oakmont (’25). Let’s give him one of those. With his creativity and knack for scoring it’s hard to believe Spieth won’t win at least one British Open, too. So that’s six, which will stamp him as one of the greatest players of all-time.

Oooh, tough one. Fowler’s Sunday debacle at this Masters was a big step backward. Then again, per this question, he has four chances a year and Rory only one. But McIlroy’s Masters was both disappointing and important. He looked strangely flat at times and never really got it going across four days but still tied for 7th, his fourth straight top-10 at Augusta. He said afterward it was the most comfortable he’s felt on that stressful course. Putting is clearly important at the Masters but Sergio made two of the worst pressure-putts in recent memory, on the 70th and 72nd holes, and he still prevailed. I gotta think McIlroy will take one of the next two Masters. I’m not so sure Fowler’s breakthrough will come that quick, so I’m taking Rory.

“Would you rather have a 15 foot downhill left-to-right putt or hit a 4-iron over water to a par-3 if your life depended on it?” — Brad (@bradsteinke)

Let’s just save the time and proceed directly to the guillotine. OK, on the 4-iron all I have to do is hit the green? Seems like there’s more margin for error there. But still, it was a pleasure serving all of you.