Arnold Palmer: The Golf Course Wasn’t the Only Place Where Arnie Soared 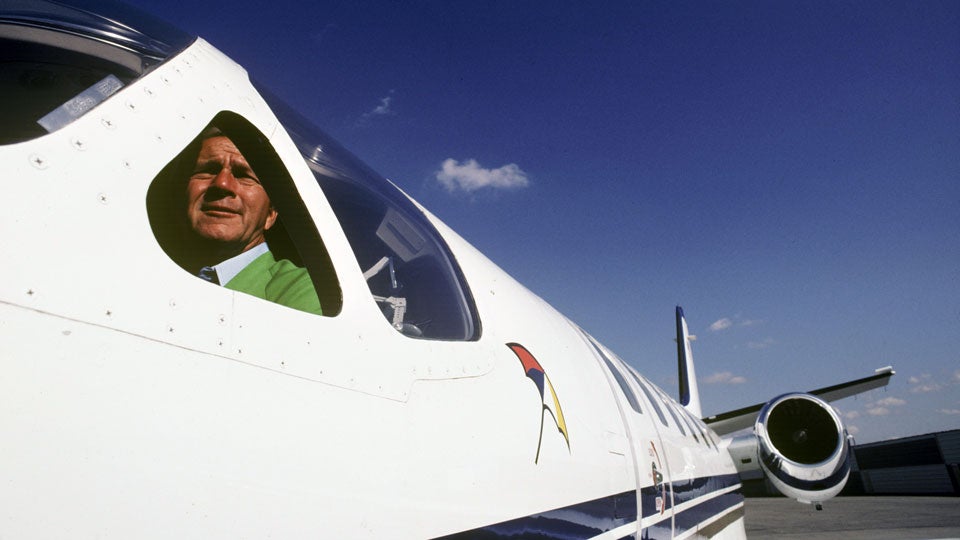 Beginning Dec. 14, GOLF.com is rolling out a story per day honoring the legendary Arnold Palmer, who died on Sept. 25. These pieces appeared in a special tribute issue of GOLF, which celebrated the life of one of the sport’s greats. Welcome to the 12 Days of Arnie. For more on The King, click here.

At Arnold’s public memorial service in Latrobe, Big Jack talked about flying through a West Texas windstorm, seat-belted and terrified, while the pilot, Arnold Palmer himself, was having a grand time. Of course he was. Arnold in the air. Close your eyes and see the grin.

It is only a coincidence that Arnold’s ball flight with the driver, in his persimmon-and-balata prime, closely resembled a jet fighter taking off from an aircraft carrier: low and fast, low and fast, then, whoosh, the sudden climb. They don’t fly “em like that anymore.

Nicklaus remembers the times when Arnold would fly from Latrobe to Columbus, solo in a single-engine prop, pick him up and head off somewhere to play an exhibition for quick and easy cash, $2,000 per man, something like that. The next day, they’d get back in the plane and do it again. Detroit. Tulsa. San Antone. A picture of manly do-it-yourself independence, isn’t it? It was the 1960s. The world had gone mad—assassinations, war (Cold and otherwise), rioting. But up in the clouds were our two golfing heroes, partners and rivals and friends, Brylcreem in their hair, their golf bags on the back seat, flying all around this vast and beautiful country, so rich with opportunity, the gray ribbons of the Eisenhower Interstate Highway System below them. They logged hundreds of miles together on courses all over the world, but that number is dwarfed by the air miles they shared.

Can you imagine the freedom Arnold had, a pilot with his own plane and a job where he made his own hours? He could be home having dinner with his wife and daughters, get in his Aero Commander, go to a party in Chicago, and be home for breakfast with Winnie, Peg and Amy. (Example courtesy of Arnold D. Palmer.) Could a middle-aged man have more fun?

All freedom, even speech, has limits. The pilot is governed by various manmade regulations, plus the laws of aerodynamics. The golfer faces about the same. Arnold’s great friend Russ Meyer, a pilot and the chairman emeritus of Cessna Aviation, explained to me the kind of mind you need to be a good pilot. He noted that Arnold had almost 20,000 hours as a pilot (about the same as Sully Sullenberger, career airline pilot, when he landed on the Hudson). “You don’t have to be a genius to a fly a plane,” Meyer said. “But you have to have a good spatial sense and good coordination.” Arnold owes his golf career to the same. All those recovery shots, above the one branch and below the other. You have to see the shot before you can play it.

Peg, the older of the two daughters, painted a picture of her father in the cockpit, in the left seat, calm and in control, talking on the radio about one of his favorite subjects, the weather. “He could be hard to engage in conversation, but he liked talking about concrete things, factual things,” Peg told me. She described flying in August 1974 with her mother and father to Williamsburg, Va., for her freshman year at William & Mary. “My father and his co-pilot carried my bags up the stairs to the third floor of Jefferson Hall,” she said. “Eighty-nine degrees and 100 percent humidity.” Arnold would appreciate his daughter’s nod to the atmospheric conditions.

Once, I asked Arnold about his dreams. A quarter of them were about golf, he said. Another quarter were about business. A third quarter, he said, were about flying. And the fourth? “Other,” Arnold said.

Arnold’s last plane was his favorite, a Cessna Citation X—an “X,” in the language of aviators. (Golfers have no use for the letter.) For Arnold, the X represented his holy grail: altitude and speed, altitude and speed. (It can fly at 51,000 feet and at nearly the speed of sound.) The last interview he gave was on August 31, in his office in Latrobe, to a magazine called Business Aviation Insider. The last flight he took was a helicopter ride from the airport in Latrobe (Arnold Palmer Regional) to a hospital in Pittsburgh, three days before he died, on September 25. The first airborne plane he ever saw was at the airfield in Latrobe in the early 1930s, on a family outing during the Depression. His ashes were distributed above the ninth green at Latrobe Country Club on September 29, 2016, a windy Thursday morning. His memorial service was five days later. The Ryder Cup was flown in for the occasion.

The mourners—no, the celebrants—came out of the basilica at St. Vincent College and were greeted by sprawling sunshine and Arnold’s X, making a low pass around the church, his longtime co-pilot Pete Luster at the controls. Suddenly, Arnold’s plane—sleek, powerful, white, elegant—ascended due north, disappearing into a cloud and to points unknown.