Arnold Palmer Helped Tiger Woods ‘Warm Up’ for the 1997 Masters 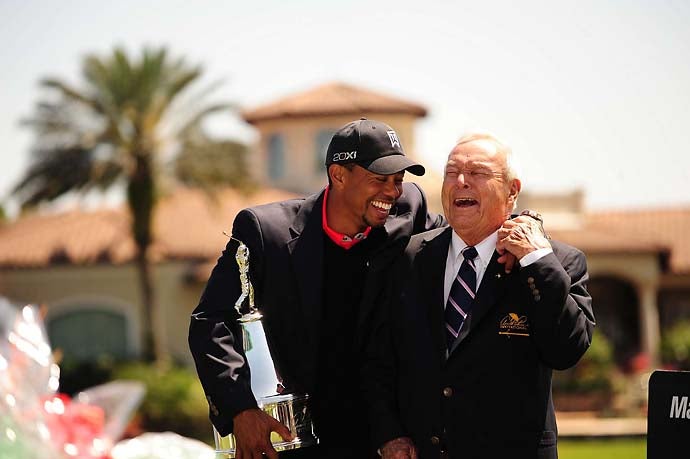 A week before winning the Masters in 1997, Tiger Woods played a round with Arnold Palmer at Bay Hill.

In an excerpt from his upcoming memoir, A Life Well Played, Palmer describes playing against then 21-year-old Woods on the eve of his first major championship victory:

“We had a friendly little match for $100, and hard as I tried, I couldn’t quite hold off a player of that caliber, in his prime — not even on my own golf course.

Tiger closed me out on the 17th hole. On the 18th tee, deciding that I didn’t want to let Tiger get into my pocket without a last-ditch effort, I challenged Tiger to a one-hole playoff, double or nothing.

We both hit good drives in the fairway on what is Bay Hill’s tough closing par-4 that measures 458 yards and features an oblong green that wraps around a lake. Of course, Tiger was miles ahead of me. I needed a driver to reach the green with my second shot, and I wasn’t going to back down. I pulled out the driver. You know: go for broke.”

This is why, Palmer writes, “I like to claim, with a wink, that I helped Tiger warm up for his first major championship win.”