Another Major Disappointment for Tiger Woods at British Open 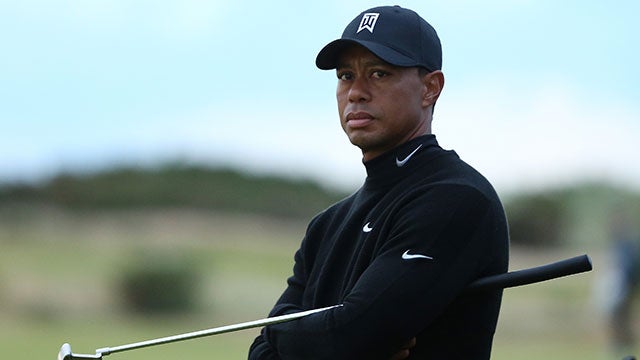 Tiger Woods of the United States looks on from the 11th hole during the second round of the 144th Open Championship at The Old Course on July 17, 2015 .
Getty Images

ST. ANDREWS, Scotland – The skeptics were wrong: Tiger Woods will play the weekend in the 144th Open Championship.

But not because he made the cut.

After torrential rain Friday morning left some Old Course bunkers resembling bathtubs, Woods didn’t begin his second round until 6:10 p.m. local time and made it only to the 12th green with playing partners Jason Day and Louis Oosthuizen before darkness fell. Their three-ball will resume play at 7 a.m. Saturday, but with Woods at five-over par, five off the projected cutline, Steiny can safely fire up the jet.

Expectations were low for the World No. 241 after his dismal first-round, five-bogey 76 left him 11 strokes off the pace. He did not disappoint. For the second consecutive day, Woods couldn’t muster a single birdie on the outward (easier) nine, turning in two-over 38.

MORE BRITISH: Live Scores From Day 2 at the British Open

“It’s like a train wreck,” ESPN analyst Dottie Pepper said of Woods’s form as she leaned on a rail by the first tee readying to walk with his group. “Sadly I think that’s what a lot of people want to see.”

As he did a day earlier, Woods set the tone with his opening shot: a low, squirrely iron that left him on the far right of the first fairway and with an awkward angle into the green. Battling a heavy left-to-right wind, he flared his approach 40 feet right of the hole and made a two-putt par.

At the par-5 5th he was lying two in the swale just short of the green, but after a chunky flop he was still short of the green and he had to settle for a par. On the next tee, Woods blocked his drive into gorse bushes right of the landing area. He took a drop and made his eighth bogey in 24 holes.

After showing signs at The Greenbrier two weeks ago that his latest swing change might finally be starting to click (a T-32!), Woods dropped back into first gear at St. Andrews. In explaining his woeful play Thursday, Woods used phrases you’ll rarely hear him utter: I made so many mistakes … I’m so far back …  His first-round 76 was his worst score on the Old Course in his four Opens starts here. Paired with his rounds of 80-76 at the U.S. Open at Chambers Bay, Woods is 21-over in his last 66 holes in the majors. In 2000, when Woods had his way with the Old Course en route to his first of two Open wins here, Nick Price said, “I’ve seen him mis-hit only three shots this week.” This time around, it took Woods all of two holes to mis-hit three shots.

Paul Azinger poured it on earlier this week, referring to Woods on an ESPN telecast as a “middle-of-the-pack hack.” The American Association for Retired People also took a pop, tweeting at Woods: “It’s better to be over 50, than it is to be over par.” On Thursday evening, CNN ran this headline: “Tiger Woods is the worst highest-paid athlete,” noting in the accompanying story that Woods has earned just $600,000 in prize money over the last year, but north of $50 million in endorsements.

The Dunvegan pub, a popular gathering spot for golfers and golf fans alike, is just up the road from the Old Course, a lob wedge from the 18th green. On Friday morning the owners had written a playful poem on a chalkboard by the entrance, part of which read:

Tiger Woods Forget Me Not

By Friday evening, those words were gone. By Saturday afternoon, Woods will be too.