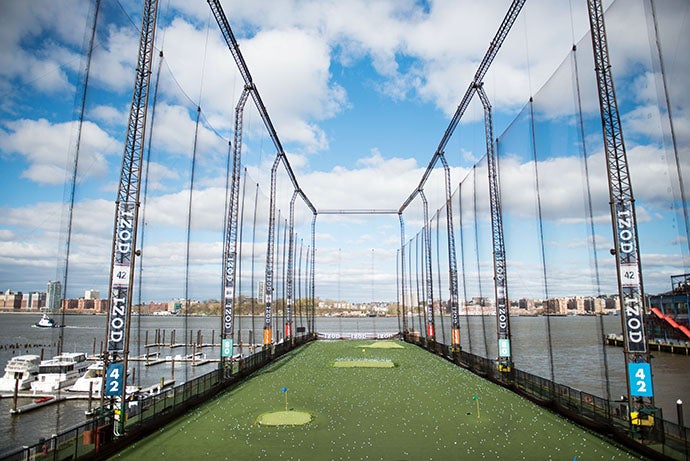 America is loaded with fabulous golf driving ranges, from resort spreads that unfurl across acres of verdant grass, to city dwellers built on piers, to waterside stunners. But which golf ranges are the best of the best?

With thousands of ranges to choose from in the U.S., identifying the best of the bunch is no small task (any panel of ball-beating zealots will have their personal faves), but we’ve nominated 20 standouts. This may not be a definitive ranking of America’s best ranges, but it is a sure-fire list of 20 public-access facilities where practice never feels like a chore. (Oh, and speaking of practice, here are a few range drills you can try to max out your time.)

The awe-inspiring range at the peak of Top of the Rock offers 16 target greens (lighted for night practice) and three decks of tees (one grass, two mats). Despite a sinkhole problem last summer, it’s still impressive. There’s also a replica of the Himalayas putting course at St. Andrews and a one-acre green with 20-foot elevation changes that lets golfers hit putts up to 200 feet long. Did we mention it’s on a bluff next to a waterfall? Wow. Practice was unheard of in the early 1900s and yet designer Donald Ross tore up three holes on the No. 1 course (1, 2 and 18) to build a range at the resort. Other U.S. courses soon followed suit, so you can thank Ross for making ranges popular. The practice area at Pinehurst has two ends and is known as Maniac Hill. The putting green by the clubhouse is sprawling and wonderful, and the short-game area with five target greens covers four acres.

Seventy-five minutes north of Phoenix and surrounded by the pristine Prescott National Forest, Wickenburg has a huge amphitheater of a range where you hit toward a bluff framed by amazing mountain views. This stunning club opened for play in 2015 after seven years in the making. It intends to go private but is accepting limited public play. Come for the course, stay for the range.

Watering restrictions pose challenges for Arizona ranges, but the TPC’s is the finest public practice facility in the state. It has an expansive teeing ground, a necessity for hosting the PGA Tour pros for the Phoenix Open, plus chipping greens and practice bunkers and multiple exquisitely maintained putting greens. There is no range like Cascata’s, where you bang balls toward a 418-foot waterfall on the mountain behind the range. The waterfall’s waterway meanders the course and even goes through the clubhouse. The range is secluded, hidden from the view of the adjacent first tee. Bighorn sheep roam the back nine at this luxurious facility, which cost $60 million to build. O.K., so the range is only 200 yards long and you’ve got to hit off mats, but this is the Big Apple, the facility has four levels and you’re hitting toward the Hudson River. There’s a teaching academy and golf simulators. It’s a godsend to city-bound golfers who want to hit a bucket or two on their lunch breaks. (Ditto any of the 19 sporty Topgolf facilities across the land.)

The sheer size and quality make St. Andrews the best practice area in the Chicago ’burbs—80 grass tee boxes and 70 mat stations, plus chipping and putting greens. The mat areas are lighted for after-hours practice.

The swank resort course that’s famous for its floating and movable par-3 green naturally has an unusual practice area. Golfers hit floaters out into a scenic lake (after arriving at the course by water taxi from the resort). There’s also a 2,400-square-foot putting green, 3,500-square-foot chipping green and practice bunkers.

The sprawling 360-degree range is home of the annual PGA Merchandise Show Demo Day (pictured). It’s all grass, with one covered area for bad-weather instruction. The size means OCN always has fresh teeing ground. The practice putting green is huge, there are several chipping greens and even a fun par-3 track, The Tooth.

This isn’t the biggest or the most impressive or even the best range but it may be the most convenient. The practice area is on your way from the locker room to the first tee. Genius. There’s also a seven-acre short-game practice area. Mainly, you want to hit balls here to get your money’s worth for the $500 green fee (and for staying at an MGM property for access), and maybe see celebs who frequent the place, including Tiger Woods, Michael Jordan, George Clooney and Matt Damon.

Founder Mike Keiser spared no expanse in creating America’s most remote golf resort. The expansive range, a short cart ride up the road from the main clubhouse, has a boatload of tees, plus big chipping areas and putting greens. Bonus points for Shorty’s, the adjacent nine-hole par-3 practice course (pictured). Also on resort property is a 13-hole par-3 layout that may be the most fun course on the grounds, plus The Punchbowl, a giant putting course that features waitresses who take drink orders and bring them out to you.

There are two practice facilities for the resort’s three courses. The main one, for guests playing the East and West courses, sports a multi-tiered hitting area with five target greens, two chipping greens with bunkers and three large putting greens. Mountain Course players have their own smaller range and putting green. Guests can buy an all-day range pass for $15.

The renovated Pine Needles course is a gem and so is its practice area, which features two large putting greens, practice bunkers and a four-hole practice course (three par 3s, one par 4).

Three chipping greens, surrounded by swales and mounds, provide a variety of short-game shots and there are three putting greens, some featuring demanding slopes, plus a 300-yard range that has target greens with their own bunkers so you can practice trying to not hit into the sand.

A huge 20-acre circular range with grass tee boxes on four sides and plenty of target greens and fairways. There’s a two-acre putting course and a three-hole warmup course, too.

Nobody beats this place for sheer quantity. There are five courses, including the track that hosts the PGA Tour’s Honda Classic, five separate ranges and 10 large practice greens on the grounds.

Despite what you may have heard, Ponte Vedra local Vijay Singh’s excessive practicing didn’t ruin the double-ended range here, or the outstanding chipping area and putting green. There’s a reason area pros come here to practice.

The range is big (75 grass tees, 40 mats) and well-manicured, as are the practice greens, but the main event here is the practice holes. There are four greens that have two flagsticks each with multiple tee boxes so golfers can create their own holes of up to 250 yards in length featuring bunkers, fescue and rough.

Long overdue for a respectable range, Pebble opened a new practice facility at the start of 2014. It’s got a double-sided range 350 yards deep, grass hitting areas, a big short game area with bunkers and a decent putting green. It also houses a golf academy. For the almost $500 a round you’re paying to peg it at Pebble, it’s finally the practice area you deserve.

This indoor dome facility, taken over and operated by Robert Morris University, is worth mentioning as the largest indoor golf dome in America, 100 yards across, and has two tiers of hitting bays. There is an artificial, if compact, putting green and a practice bunker. During Pittsburgh’s cold winter, this practice area is a hot spot. I should know. I’m a regular.