Adam Scott Aims to Put 1 Bad Hole Behind Him, Win in Australia 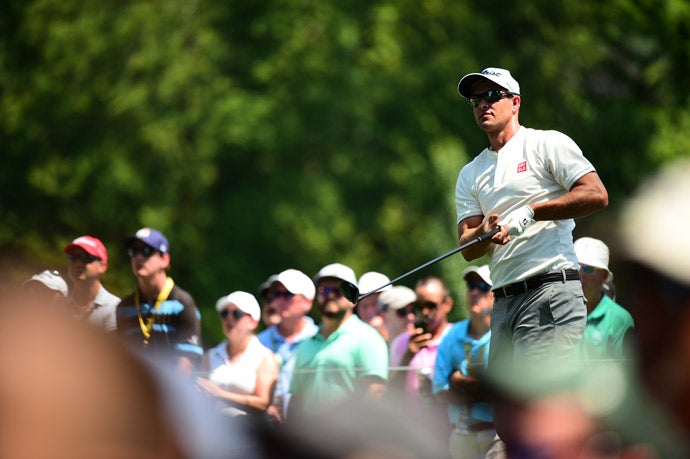 SYDNEY (AP) — As he approaches another Australian Open at Royal Sydney, Adam Scott isn’t thinking about the lead he held for 71 holes.

It’s just the one hole that haunts him.

After opening with a course-record 10-under-par 62 in 2013, Scott led the Australian Open until a bogey at the last hole which allowed Rory McIlroy to finish over the top and claim the Stonehaven Cup.

“I certainly feel like I’d like to get a win here at Royal Sydney after what happened a few years ago,” Scott said Wednesday, on the eve of the 2016 tournament. “That burns a little.”

Scott won the Australian Masters and the Australian PGA in 2013, the same year he won his only major at Augusta National, and was ever-so-close to winning the three biggest titles on the Australasian tour and matching the feat only ever previously achieved by Robert Allenby in 2005.

He hasn’t added to his majors since, but doesn’t believe he’s far off despite a 2016 that petered out after a strong start.

“After having a great start to the year and winning two events in a row, and having a couple of second-place finishes before that, the expectations naturally go up for the year,” Scott said. “You think you’re going to storm through and have a career year and a memorable year; but it didn’t quite happen.”

The 36-year-old Australian admitted his 2016 season “was a bit lean” after the great start.

“I was a little disappointed with that, but my standard of golf is still high and I now just need to capitalize on that; hopefully here this week.”

Scott finished in a tie for second last year with Jordan Spieth, who is returning to the Australian Open for the third straight year after winning on his first try in 2014.

Spieth’s two previous Opens were at The Australian course, and he has spent time this week familiarizing himself with Royal Sydney.

“He’s got a very mature head on his shoulders, so he’ll figure it out,” Scott said. “But just having played here a fair bit over the years, I feel very comfortable. I might have a little bit of an advantage in that sense.”

Spieth has identified his course-record round to win the 2014 Australian Open as part of a career turning point. He went on to win two majors and rise to No. 1 in the rankings.

The American, now ranked 5th, is coming off a six-week break from competitive golf and is confident the rest while only help in his pursuit of another Australian title.

Jhonattan Vegas is one of the other international stars in the field, which includes high-profile Australians Geoff Ogilvy, Aaron Baddeley and Allenby. Matt Jones is not defending the title he won in 2015.