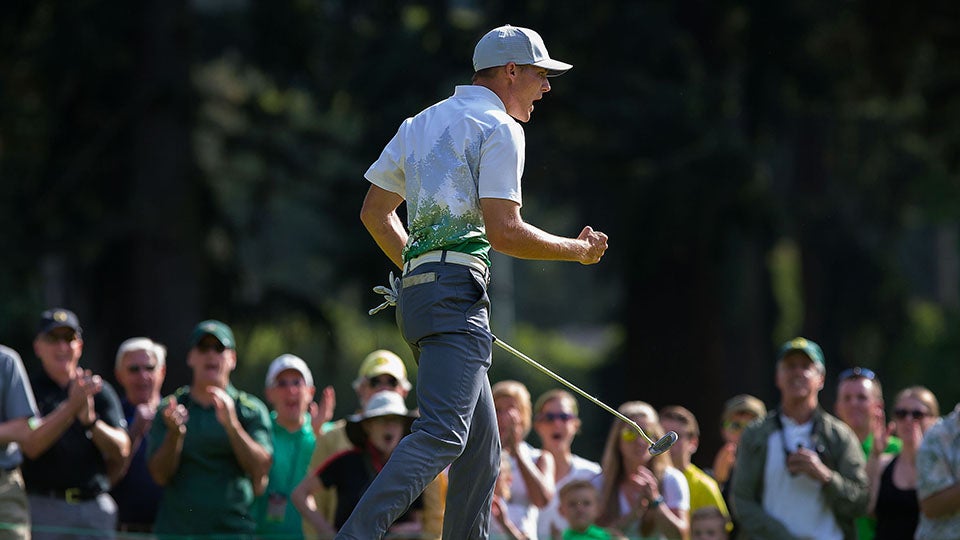 Oregon's Aaron Wise celebrates a birdie on the 17th hole at the NCAA Division I men's college golf championship at Eugene Country Club in Eugene, Ore., Monday, May 30, 2016.
Brian Davies

EUGENE, Ore. (AP) Oregon sophomore Aaron Wise bounced back from a tee shot in the water with a birdie putt and a ferocious fist pump, closing with a 1-over 71 on Monday to win the NCAA title by two shots and give the Ducks a chance at the team championship.

Wise, who is turning pro after the NCAA ends at Eugene Country Club, is the first Oregon player to win the individual title. He also became the first player from the host school to win the men’s national golf title since Gary Hallberg at Wake Forest in 1979.

He finished at 5-under 275, though it was tight at the finish because of a pair of double bogeys on the back nine, including a 5-iron into the water on the par-3 16th. But he drilled his tee shot at 17 and holed a pivotal birdie putt that sealed his title.

He said he told assistant coach Van Williams, ”When I make this thing, it’s going to be a roar.”

”It was one of those putts I actually struggled to read,” Wise said. ”I called in Van. He settled me down and said, ‘You’ve got to trust what you do.’ Obviously, I read it right. When that thing went in, I let out some emotion.”

It probably didn’t hurt to have a little extra support on the first tee from Oregon’s mascot, the Oregon Duck, who was visibly impressed by Wise’s opening tee shot on Monday. Call it a lucky duck!

Individual leader Aaron Wise, of @OregonMGolf, is off… with some encouragement from No. 1 fan, The Oregon Duck. pic.twitter.com/rVWLfQI3fz

Rico Hoey of Southern California shot 69 to finish second, while Matthias Schwab of Vanderbilt was alone in third.

The Ducks, who were No. 26 in the latest NCAA poll, were among eight teams which advanced to match play to decide the team title. Top-ranked Texas enters match play as the No. 1 seed, followed by Illinois and defending champion LSU. Vanderbilt, which had the 54-hole lead until the Commodores shot a collective 12 over, tied for fourth with USC, the runner-up a year ago. Oregon was No. 6, while South Carolina and Oklahoma grabbed the last two spots.

The Gamecocks also shot 3-under 277. Illinois had the best score of the final round of stroke play at 4-under 276. The Illini have produced two individual champions since 2010 and were runner-up to Alabama in 2013, but they have never won the team title.

Wise plans to play the Mackenzie Tour in Canada, but he still has plenty of golf to play for the Ducks.

”It makes it harder, knowing this is my last event in front of my teammates, my family, my friends,” Wise said. ”It’s hard. My family came up just because it was my last event. All that brings pressure – being on your home course, everything. There was a ton of pressure on me today. I’m happy with the way I was able to calm down before the round and go out there and execute.”