On Thursday Jordan Spieth celebrates his 24th birthday, and the young man has already lived quite a life. In honor of his big day, here are 24 of his coolest accomplishments.

1. Let’s start with the freshest, newest and most obvious: With his win last weekend at Birkdale, Spieth has checked off three legs of the career Grand Slam. Sorry, Tiger: Spieth and Jack are the only players to get that far before age 24. 3. He’s spent 26 weeks ranked as No. 1 in the Official World Golf Ranking. Spieth first seized the top spot in August 2015, and has enjoyed four separate stints with the crown. 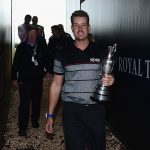 4. He’s the first player in history with three majors and at least 10 Tour wins before age 24.

With a win tomorrow, Jordan Spieth would become 1st player in golf history with 10 PGA Tour wins including 3 majors before age 24.

6. In 2010, he became the sixth-youngest player in PGA Tour history to make a cut, when he played the Byron Nelson Championship on a sponsor’s exemption and tied for 16th.

7. He has paired with Patrick Reed to form one of the most formidable American duos in recent U.S. Ryder Cup history…

8.…and he was a key part of the winning U.S. team at Hazeltine that snapped the Yanks’ eight-year drought.

12. Also in ’15, he became just the sixth player in history to win the Masters and U.S. Open in the same year.

13. At that Masters he matched Woods’s scoring record, with a final tally of 18-under-par.

15. He almost single-handedly made Under Armour a legit golf apparel brand. 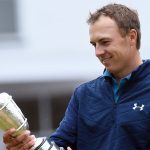 You may also like #AskAlan mailbag: Was Birkdale Jordan Spieth’s defining moment as a pro?

17. During his British Open win at Birkdale, he fired four rounds in the 60s, the first time he’s done that at a major. He also became the first player to achieve that feat in 10 Opens at Birkdale.

20. His conversations with his golf ball have been immortalized on YouTube.

22. He’s mastered the late-night talk-show circuit, and had a few viral moments, including this one with Jimmy Fallon.

23. Oh, did you hear? After bogeying the 13th hole in the final round of the British Open, he played the ensuing five holes in the five under to win the claret jug. No one’s ever gone five-under in the last five holes of a major and won.

24. He blew out a candle on the jug. Not bad. Happy birthday, Jordan.