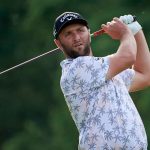 Jon Rahm is the betting favorite at Torrey Pines this week.

It’s time for the third major championship of 2021: the U.S. Open. This year, the championship is returning to Torrey Pines in La Jolla, Calif., for the first time since 2008, when we bore witness to one of the most epic duels in golf history, as Rocco Mediate went toe-to-toe with Tiger Woods in a playoff, with Woods eventually emerging the victor. What drama will transpire this year? Below, you’ll find everything you need to know about the tournament field, including a complete list of competitors.

Bryson DeChambeau won the 2020 U.S. Open at Winged Foot, which was played less than nine months ago. As venues, Torrey Pines and Winged Foot couldn’t be more different, but the two courses are sure to share one ubiquitous U.S. Open trait: they’ll both play tough as nails.

As defending champion, hopes are high for DeChambeau’s performance this week. When it comes to odds, he’s the third favorite at 16/1 (alongside Brooks Koepka and Xander Schauffele) and behind Jon Rahm (10/1) and Dustin Johnson (14/1).

For Rahm, a win this week would not only mark the first major championship of his career, it would also be his second victory at Torrey Pines. In 2017, his win at the Farmers Insurance Open was his first on the PGA Tour. Rahm is also primed for a big-time comeback statement, after a positive coronavirus test forced him to withdraw from the Memorial after the third round, when, after amassing a six-shot lead, Sunday’s round looked to be more of a coronation round than a competitive one. After a stint in PGA Tour-mandated isolation, he’s been cleared to play.

And what about Phil Mickelson? The newly-minted PGA champion has one rung left to climb on the career-grand-slam ladder. Could this be the week at last? We can’t wait to find out.

Who earns an invite to the PGA Championship?

The USGA — the governing body responsible for hosting the U.S. Open — lists 18 criteria for earning an invitation to Torrey Pines. They are as follows:

10. Players who qualified for the 2020 Tour Championship

12. The top 10 aggregate points earners that are not otherwise exempt from the three-event U.S. Open 2021 European qualifying series (Betfred British Masters, Made in Himmerland Championship and Prosche European Open).

13. Winner of the 2020 The Amateur Championship staged by the R&A (permitted they remain an amateur)

14. Winner of the 2020 Mark H. McCormack Medal for being the No. 1 player in the World Amateur Golf Ranking (permitted they remain an amateur)

16. The top 60 points leaders and ties from the June 7, 2021 Official World Golf Ranking (if not previously exempt)

18. Special exemptions as selected by the USGA.

So, who made the cut? Check out the full field list below.