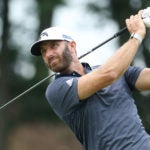 Dustin Johnson hits his tee shot on the 18th hole at TPC River Highlands on Saturday.

Brendon Todd has hit 72.5 percent of his fairways this season, the fourth-best mark on the PGA Tour. This week at the Travelers Championship, he’s been better, 97.6 percent, 41 out of 42. He’s one of the most accurate players off the tee on Tour.

Dustin Johnson has hit his drives an average of 306.9 yards, the 22nd-best mark on the PGA Tour. This week at the Travelers, he’s been better, 307.8 yards. He’s one of the longest players off the tee on Tour.

Each also shot career-low 61s during Saturday’s third round, and they’ll be paired together during Sunday’s final round at TPC River Highlands in Cromwell, Conn., teeing off at 2:05 p.m. Todd is 18-under, and Johnson 16-under. Two different ways to the top.

The Golf Channel will broadcast the tournament from 1-3 p.m. ET, and CBS will continue coverage from 3-6 p.m. ET.

The fourth-round tee times are below: