2020 Travelers Championship live coverage: How to watch the Round 4 on Sunday 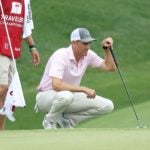 Brendont Todd leads heading into the final round at TPC River Highlands.

Despite impending storms, the Travelers Championship got in the entirety of the third round Saturday, setting up what is sure to be an exciting Sunday finish. Players continued to take it deep Saturday as three players posted 61 on Moving Day. Here’s everything you need to know to follow Sunday’s action.

Brendon Todd is putting on some kind of show around TPC River Highlands. The 34-year-old has missed just one fairway all week as he’s opened up a two-shot lead heading into Sunday. Todd has made just one bogey on the week and rode a third-round 61 to a date in the final pairing on Sunday. He’ll be joined in the final pairing by Dustin Johnson, who fired a tidy 61 of his own on Saturday. Todd is looking for his third win of the season while Johnson seeks to get back in the winner’s circle for the first time since 2019.

How to watch Travelers Championship Round 4 on TV

Golf Channel and CBS will once again split broadcast duties on Sunday at the Travelers. Golf Channel will carry the early action from 1-3 p.m. with CBS picking up coverage from 3-6 p.m.

How to stream Travelers Championship Round 4 online

For fans with a cable subscription, they can log on to golfchannel.com to stream the early action. Fans can also view featured hole coverage of the final round all day Sunday via PGA Tour Live, though you will need an account to access the stream. CBS will also have a live simulcast streaming on CBSsports.com and the CBS Sports app.

2020 Travelers Championship tee times for Round 4 (All times ET)

We thought we knew Tiger Woods when he won the U.S. Open at Torrey Pines. We didn't