2019 PGA Championship Live Coverage: Highlights from the third round at Bethpage 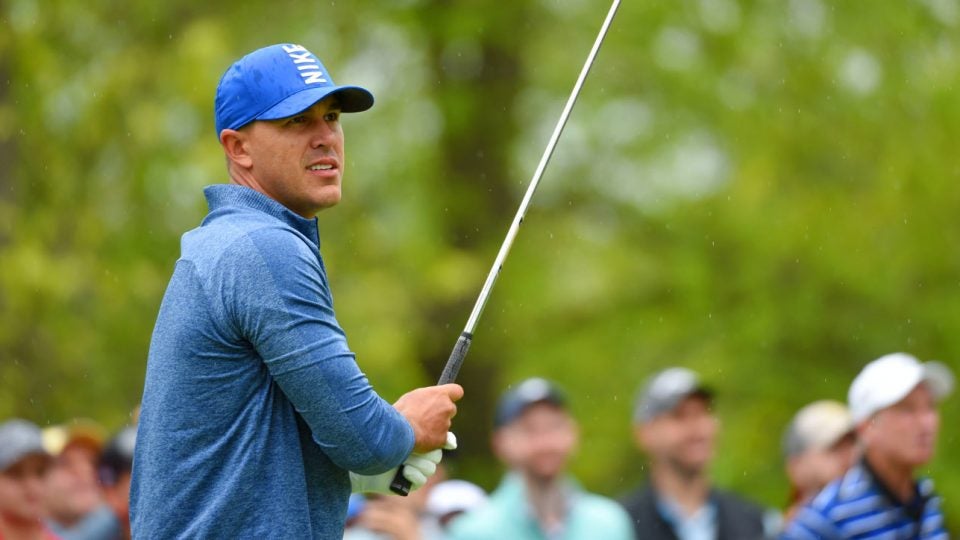 Brooks Koepka pictured during the second round of the 2019 PGA Championship.
John David Mercer/USA TODAY Sports

Moving Day has arrived at the 2019 PGA Championship at Bethpage Black. You can follow Saturday’s third round with our PGA Championship Live Coverage below, featuring live score updates, highlights from your favorite players, and video clips of the best shots.

Through the first two rounds, there’s one player who has separated himself atop the leaderboard: Brooks Koepka. Koepka is the defending champion this week, and heads into the third round with a huge seven-shot lead. That gives him a fantastic shot at defending his 2018 PGA Championship title by going back-to-back to collect another Wanamaker trophy.

But lurking in second place are two star players who have won majors before: Jordan Spieth and Adam Scott. They start the third round at five under with history on the line. Spieth, a four-time major champion, has struggled over the past two years. But if he can summon some greatness to win the PGA, he will complete the career Grand Slam.

Koepka and Spieth tee off in the final group at 2:50 p.m. ET. You can follow entire third round at Bethpage Black with our 2019 PGA Championship Live Coverage blog below, beginning at 2:00 p.m. ET.

FULL PGA LEADERBOARD | DEBATE: CAN ANYONE BEAT BROOKS?
Refresh the page for the latest updates.

6:54 p.m. So it was a Moving Day without much moving. And for Brooks Koepka, that’ll do just fine. It will take something monumental to upend Brooks tomorrow, who will likely secure his fourth major in the last eight. That’s all for today. Stay tuned to GOLF.com through today and into tomorrow, as we bring you much more coverage of the PGA Championship from Bethpage.

6:51 p.m. Spieth two-putts for a 72. Brooks left his birdie putt short. He ends with a 70 and a seven shot lead going into Sunday.

6:47 p.m. An outrageously good shot from the left bunkers from Spieth to just clear the lip of the green and roll to about 20 feet. Brooks will have about 15 feet to end with a 69 on the day and an eight shot lead. Ho hum.

6:42 p.m. Brooks is in Position A on 18. Just left-center, smoked down there. Spieth hooked his left, just trying to limp home here.

6:37 p.m. DJ cannot get up on the green from the fescue. He does do so from the sand to save his bogey, but that means he will not be in the final pairing tomorrow. He’s at five under for the tournament, seven behind Brooks.

6:30 p.m. Brooks Koepka, like just about everyone else, is laboring today. He makes bogey on 16 to fall back to even on the day. The difference between him and everyone else, of course, is he has a six-shot cushion. And now, DJ is in real trouble on 18…

6:26 p.m.  So, Luke List missed a par putt on 18 — finishing his day with back to back bogeys. That means if DJ makes par or better on 18, he’ll likely be paired with Koepka tomorrow.

6:06 p.m. Brooks makes a mockery of the rough on 15. Just cozies it up to about 15 feet from the thick stuff. He continues to play a different game.

5:58 p.m. Dustin Johnson makes a five-footer for birdie on 15. Strong response after the bogey on 14.

5:56 p.m. Jazz drains his birdie on 18 to finish off a 67 for him. He’s five under and will be in the thick for second place tomorrow.

5:49 p.m. Harold Varner III finishes off a bogey-free round with a birdie on 18 to move to five under. He shoots 67. Tremendous round of golf for him.

5:47 p.m. Are you kidding? Brooks misses the tee shot into the trees on 13, misses the next shot into the rough on the right again. Then what does he do? Just muscles the approach to 10 feet and makes the birdie putt to move six shots clear. Faldo: “That might be it right there, folks.”

5:42 p.m. He then tries to putt the next shot, rolling it about 10 feet past the whole. DJ does make the putt to salvage bogey.

5:39 p.m. DJ lofts his chip high in the air but it lands on the bank and rolls right back toward him. Now he’ll have to get up and down for bogey. Yeesh.

5:34 p.m. DJ takes a seven iron (?!?) on 14 and absolutely flies the green. That’ll be a treacherous up and down for him after an… interesting club choice.

5:26 p.m. List does it again on 14. The ball takes a bit of a hop in his line, but takes the right-to-left break into the center of the cup. He’s now alone in second at seven under, just five shots back of Brooks. This would be the first top-30 finish at a major in his career.

5:15 p.m. Really impressive approach from DJ to go right at the flag on 12, and then he drains the birdie. A make percentage of 26% on that putt — and now, DJ is six under and six shots back of Brooks.

5:02 p.m. Brooks went rough to rough to 10 feet on No. 10. He misses the par putt and will go bogey-bogey for the first time in recent memory. He’s 12 under now. Maybe he’s wobbling. Or maybe the course is just really hard.

5:00 p.m. Luke List! He holes out a chip on 12 after making a sand shot on 6 earlier in the day. He shakes his head and smiles, moving to five under on the tournament.

4:48 p.m. Among the mortals, Justin Rose pours in a 50-footer for birdie to get to three under and Harold Varner moves to four under with a birdie of his own. The fight for second is fierce right now.

4:42 p.m. Man, oh man, DJ will be kicking himself. Misses a ~ five-footer after it looked like he might save par. That’ll set him back to six under.

4:36 p.m. Juuuuuuusssttt when it looked like DJ might be charging, his drive finds the fescue to the right on 10. Just an atrocious lie, as he has to hack it out to the fairway. He’ll be scrambling to save par.

4:29 p.m. If Dustin Johnson could get things rolling with the putter, he might have a say in this thing. He knocks it in tight on No. 9 and, this time, nails the birdie. That’s DJ’s seventh (!!!) wedge shot into nine holes today. He’s seven under and now a mere seven shots back of Koepka.

This was much harder than Brooks made it look (like everything else) pic.twitter.com/TZU4LLnl8N

4:20 p.m. For once, Brooks is going to have about 10 feet to save par, after his tee shot stayed right and his approach carried past the green.

4:11 p.m. Janewattananond is going to make me spell his name all afternoon. He makes birdie on 10 and is six under. Neither Spieth nor Koepka make their birdie putt — Jordan’s stroke, in particular, did not portray much confidence.

4:08 p.m. Spieth and Koepka trade darts into 6. Jordan’s came inches from dropping into the cup. That’s 14 consecutive greens for Koepka.

4:05 p.m. DJ narrowly misses another birdie opportunity on 7. Gonna have to make those (thanks, Captain Obvious!) to have any shot at Brooks.

4:00 p.m. (ET): Brooks went onto tap-in that birdie. He’s now two-under on the day, and the funny thing is, it probably should’ve been more…

Less than 24 hours ago, Brooks said he wasn't hitting the ball that good.

3:57 p.m. (ET): Brooks, apparently annoyed at making a par that one time, stuffs another shot for a tap-in birdie. Our Editorial Director Ashley Mayo puts it best…

The fifth hole at Bethpage is the hardest hole out there (yep, it's tougher than 15) and Brooks just hit driver pitching wedge and has a tap-in for birdie. Rude.

3:51 p.m. (ET): A disappointing miss from DJ. Just over six feet away for birdie on the 6th hole, he burns the edge and settle for a par. The make percentage on those is about 60 percent, so it’s not an inexcusable error, but with Brooks pulling away this fast, you need to make those.

3:24 p.m. (ET): Even though this tournament remains the Brooks show, there’s been a fair bit of shuffling on this leaderboard early on moving day. DJ burned the edge on another good-looking birdie try on the 5th and remains in second alongside Jazz Janewattananond, who’s three-under for the day. Xander Schauffele, meanwhile, is two under on the day and inside the top 10.

3:02 p.m. (ET): Brooks hammers a tee shot, stuffs a wedge in close, then misses a short birdie putt. Walks away with a par. Maybe he is human, after all.

The runaway leader pulls his birdie putt past the left lip of the hole so must settle for a par at the first. He remains 12 under.

2:49 p.m. (ET): Oof, Daniel Berger just got really unlucky. Ropes a wedge all over the pin — so much that it hits the pin and rebounds all the way to the front of the green. A sure-fire birdie turned into a tricky two putt.

2:43 p.m. (ET): A little wedge and a short putt means DJ birdies the first. Brooks, meanwhile, is on his way to the tee.

2:33 p.m. (ET): DJ pipes his first drive of the day. He may be eight shots back, but of all the contenders, he may stand the best chance of actually putting a run together and catching him.

Lot of golf left but you have to shake your head at @BKoepka’s record-setting results for 2 days of @PGAChampionship! Just terrific! He’s playing a different course, a different game, but could end up with the same result in a major he has had 3 times in less than 2 years.

2:12 p.m. (ET): Justin Rose, who’s currently nine back, just teed off the first. He’s going to have to put together a pretty incredible round just to be an afterthought tomorrow. Meanwhile, fellow Englishman Tommy Fleetwood misses a short part putt to slip back to one-under.

2:05 p.m. (ET): Hello all, Luke Kerr-Dineen here, and I’m honored to be your live blog sherpa through the third round of the 2019 PGA Championship. Get ready for Brooks to extend his lead from seven to about 12. That’s my early prediction.
To receive GOLF’s all-new newsletters, subscribe for free here.