2016 Ryder Cup Preview from Hazeltine: One Year Away 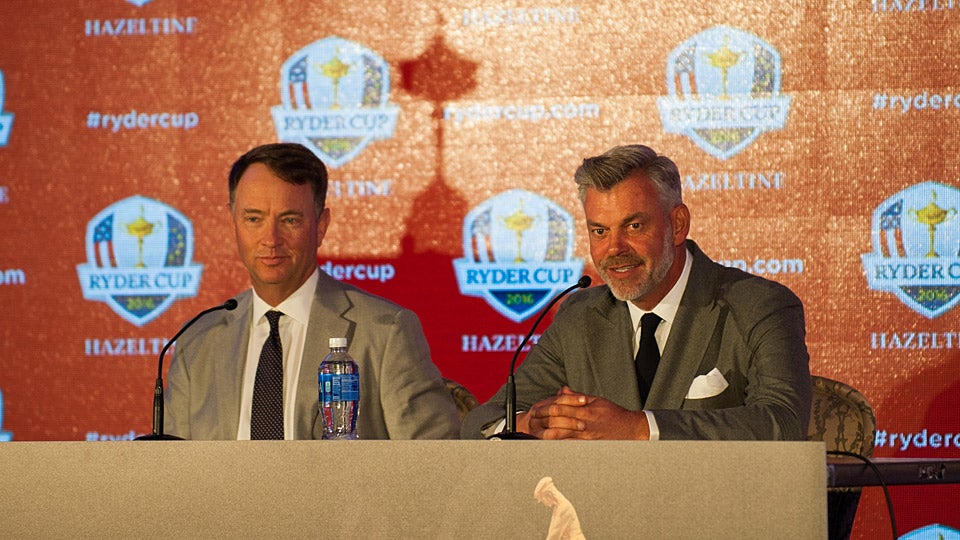 CHASKA, Minn. — Even 24 hours ago, I would have laughed in your face and scoffed at the notion of discussing next year’s Ryder Cup matches. It’s 12 months and a billion variables away and far too soon to even think about it, I would’ve said. Tuesday, I arrived at Hazeltine National Golf Club for a Ryder Cup media day, officially known as the One-Year-To-Go outing.

I saw the steps leading from the dropoff circle to the new clubhouse. Painted in red with white lettering on the face of each step was “Where Legends Are Forged 2016 Ryder Cup.” Walk through those doors and you’re greeted by a wall of big mural-sized photos under the same heading. There are huge pictures and Phil Mickelson and Keegan Bradley, another one right in the middle of Patrick Reed, Spieth and several European players.

The doors on the other side of the clubhouse are adorned with Ryder Cup logos and two huge photos of Davis Love and Darren Clarke, the respective captains.

I bumped into Davis upon my arrival in the grillroom and had a short chat. I asked how his son, Dru, was enjoying college life at Alabama. Talking as he signed a few souvenir Ryder Cup logo golf bags, Davis said Dru was loving it except for the part about not playing so well at the moment. That’s golf. I asked Davis what Dru was majoring in. Davis laughed as he answered, “Communications.”

We talked briefly about his McGladrey Championship fall tournament at Sea Island. I asked if the event had a Monday qualifier and when he said yes, I told him my son, Mike, may give it a shot. He just finished a mostly encouraging season on the Mackenzie Tour in Canada (he led the tour in eagles most of the season) and the McGladrey falls right before the second stage of Web.com qualifying school. I didn’t ask Davis if he could give my son a sponsor’s exemption, but I probably should have.

Fifteen minutes later, Love and Clarke sat on the patio with their backs to a gloriously bright rising sun and talked Ryder Cup with Golf Channel‘s Damon Hack (a former colleague of mine at Sports Illustrated) on the “Morning Drive” show.

They did well. After they finished, there was a short break and I joined Hack for five more minutes of on-air Ryder Cup talk. I probably wasn’t horrible.

What followed next was a press conference in a ballroom with Love and Clarke and local media in attendance, plus some international media on a telephone hookup.

Before they entered the room, however, an ongoing stream of local media and others walked up to the front of the room to take pictures with the Ryder Cup, which was on display on a stand. Some took selfies, some just snapped it with their phones, some were pro photographers going for a trophy beauty shot.

When I took a seat in the audience, a couple of guys behind me (members, maybe) exchanged comments.

“That thing isn’t nearly as big as you thought it would be,” one guy said. Yeah, it’s only 17 inches tall, and that includes the base.

“It’s not the Stanley Cup, that’s for sure,” his buddy replied.

“I drank out of the Stanley Cup once,” the first guy said.

“With who?” the second one said.

A Ryder Cup official then introduced a video, probably titled “Where Legends are Forged,” although I honestly can’t remember. It began with some unusual violin music that eventually became more traditional. What made this video brilliant was that there was no narrator. None was needed. It was faces, mainly, of Ryder Cup players past in action. A lot of closeup, histrionics of players after great shots and a section of players reacting to poor shots. There was old history — Byron Nelson grinning, Ben Hogan holding the cup after captaining and young Arnie and Jack smiling — and more recent history, from Graeme McDowell to Seve Ballesteros to Payne Stewart and Phil Mickelson and Tiger Woods and, well, just about everyone. I’m not sure where you can go to see this video but it’s the finest golf video on one event that I’ve ever seen.

Finally, after all that, Love and Clarke came in and made opening comments and then took questions from the media. There was one interesting one from a British writer on the phone asking about the Solheim Cup controversy regarding the short putt that was seemingly conceded when the two European players turned and walked away but after the American player picked it up, she was told that it had not been conceded. There were tears and arguments and the mistake probably inspired the American team’s rally the next day.

“That was an unfortunate thing,” Clarke said. “In the Ryder Cup, we are always briefed by referees and rules officials early in the week and we do not touch a ball until we hear either from our opposition or from the referee. I’m sure it won’t happene under our watch.”

Love agreed and added, “Darren and I will set the tone with our teams on how we expect the matches to be played. Something will come up during the three days that is uncomfortable, but we’ll handle it as gentlemen and in a sportsmanlike way. It will be fair and competitive and fun. In the end, one of us will win, one of us will lose, but we’ll enjoy a cigar and a tear afterward on Sunday night. It will be a very fair match. That was an unfortunate incident at the Solheim Cup, and I think we all learned a lot from it.”

There were other topics and other questions, the normal advance stuff. The finishing holes on the respective nines will be switched to allow for more excitement, perhaps, and to provide better viewing and exit routes for fans. The original 16th, 17th and 18th holes are near a lake and thus have limited spectating opportunities because fans can only walk on one side of the fairway and the water limits grandstand placement.

The course has been entirely renovated and regressed, the clubhouse has been rebuilt. It’s terrific inside. I walked into the locker room — it’s big and there are rows and rows of new wooden lockers. They’re so new, the scent of fresh wood pervades the room, the golfing equivalent of a new-car smell.

The main clubhouse looks great from the outside — classic stonework, not ostentatious. The far end of the clubhouse, where the locker rooms are, were supposed to have more of a low-key ranch look, I guess, but it reminded me more of an early 1960s elementary school. It’s a minor quibble and you may disagree. The inside of the clubhouse is fantastic, with a lot of windows and sunlight streaming in. It’s beautiful.

All the merchandise in the golf shop is Ryder Cup stuff. It’s amazing what you can slap a Ryder Cup logo on and make it a desirable gift. The only thing keeping me from stocking up were the prices. A $30 T-shirt was pretty cool but as a cheap guy, I just don’t pay $30 for T-shirts. There was also an exquisite gray sweater with just a Ryder Cup trophy on the front. Very tasteful, as it should be for $495.

After the Q&A, we went out on the course in a shotgun-start scramble tournament. My squad, missing a fourth player, shot 66. Don’t be impressed. One rule was that you couldn’t make worse than par on a hole. The winning team shot 63. What I learned from the golf was A, I don’t remember Hazeltine as well as I thought I would from the 2002 and 2009 PGA Championships, and B, This is one terrific golf course and one pretty difficult track. I was glad I didn’t have to play all of my misses around 18 holes, it would’ve been a long day.

At the first tee (our 16th hole since we started at No. 4), we posed for an official team photo with the Ryder Cup, which was enclosed in a glass case.

This has no relevance, but it’s something that you should know. There were several snack stops on the course. By the clubhouse, Hazeltine chef Eric Simpson had a unique treat for us. Taco Brats. Yes, they were tiny bratwursts in soft taco shells along with the usual spicy taco fillings. Eric Simpson is a genius. Why there isn’t a chain of Taco Brat fast-food restaurants in Minnesota and Wisconsin is a question for which I have no answer. Let me repeat: All hail Eric Simpson.

Love said one other thing that I wrote down. He was asked about Minneapolis and the reception he got Monday — I think every local sports team, the Twins, Vikings and Wild, gave the captains honorary jerseys. Love raved about the hospitality and the enthusiasm that is already apparent not only for the Ryder Cup but for the newer, better-than-ever Hazeltine National Golf Club.

“The Hazeltine National folks have done an incredible job getting ready,” Love said. “They are overly excited. They are ready to go now.”

The One-Year-To-Go day was more successful than I would have guessed. That stuff I said at the top of the story about the Ryder Cup being too far away to be relevant? This day did it. Like the Hazeltine National members, I’m ready to go now.