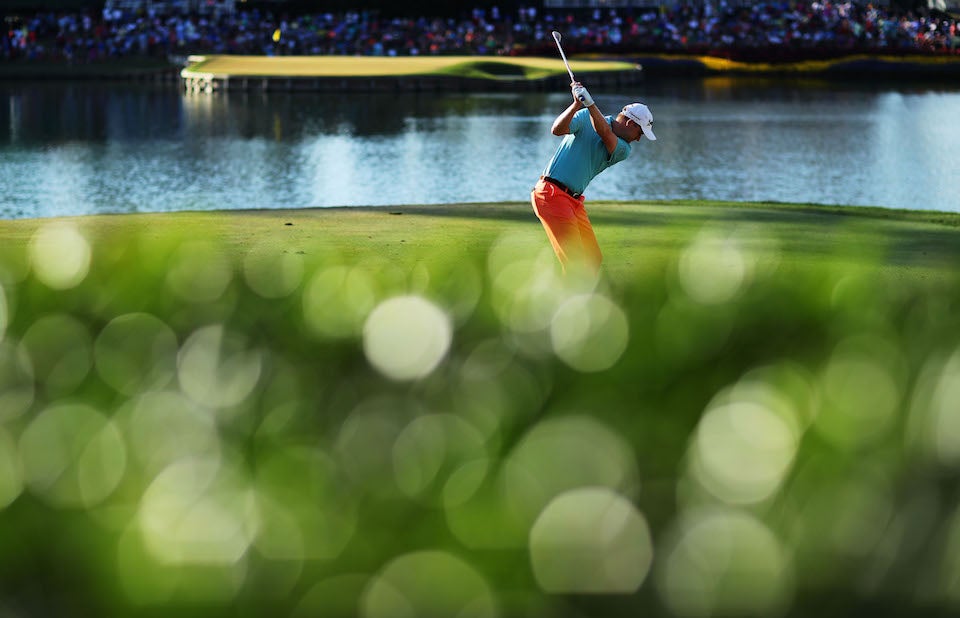 Russell Knox limped to a 9 on the par-3 17th on Saturday, and he hit the green, but bogeyed the hole, during Sunday's final round
Getty Images

PONTE VEDRA BEACH, Fla. – Russell Knox had no prayer of winning the Players Championship at the Stadium Course at TPC Sawgrass on Sunday.

Still, his heart was thumping as he stood on the tee at the watery par-3 17th hole.

“I’ve never been so nervous over a shot in my whole life,” he said.

Tour pros don’t spook easily, but Knox had spooked at the hole Saturday, rinsing three balls—including a shank—while making a 9. As he returned to the scene of the accident Sunday the outcome meant nothing as it related to the trophy, but everything to him. “It was a career-defining moment for me,” said Knox, a 30-year-old Scotsman who lives in Jacksonville. “If I couldn’t get off the tee there today, I was in big trouble.”

He quieted the ghosts in his head, addressed the ball, swung—and watched his ball hit the fat of the green. He raised his arms like Rocky Balboa as the crowd cheered.

If you’re like most fans, you’d never given Knox much thought until this week. He has one career win, at the WGC-HSBC Champions last November. Then came 17, golf’s clearest window into who these guys really are, and suddenly there was Knox in full—one of the week’s biggest winners along with Jason Day and Will Wilcox, the ebullient kid who aced the hole Friday. (They finished 19th, 1st and 72nd, respectively.)

The 17th is not a particularly daunting hole, at least not normally. It’s only about 137 yards, depending on where the pin is, and the pros can make it look easy. In winning the 2015 Players, Rickie Fowler put all three of his tee shots on Sunday within seven feet of the pin. (He played it once in regulation, twice in a playoff, making three birdies.)

Knox himself had never found the water there, and he used to play the Stadium Course all the time. (He went to Jacksonville State University.) Then came Saturday, when he left an entire sleeve of balls for the scuba divers.

“The green felt like it was the size of a quarter,” he said afterward.

Sunday morning Knox tweeted, “SHANK you very much for all the nice messages. Looking forward to getting my revenge today!!! #THE PLAYERS.” He reminded himself how well he was playing—other than the 9—and confirmed it with a 4-under 68 in the final round, an effort that included 13 pars, three birdies, an eagle, and a bogey—on 17.

Yep, Knox three-putted the hole, his par try cruelly lipping out to make him seven over on that hole on the weekend. Still, he smiled. Still, he found the bright side.

“I beat my score yesterday by five,” Knox said, “so pretty solid.”

That wasn’t all he did. He also made a ton of new fans.

“I mean, you’ve got two choices,” he said. “Either you’re good with it or you’re not, and I chose the good side, I guess. You can only laugh. I mean it’s the 17th of Sawgrass. It’s one of the coolest holes ever, and yesterday it got my lunch. But I knew I could come back, and I’m glad I hit the green today.

“I mean, I wish I could have yesterday over,” Knox added. “It would have—I would have been right there, I think. But at the same time it is what it is, and I look forward to—I would say I got my revenge, even though I made a bogey. Whatever.”