2015 PGA Championship: Steve Stricker Completes What Could be Final Major

Steve Stricker tees off on the eighth hole at Whistling Straits during the PGA Championship.
Getty Images/Jamie Squire

HAVEN, Wis.—The crowd rose as one.

Steve Stricker was still a hundred yards away from the 18th green at Whistling Straits when the Wisconsin fans packing the large grandstands Sunday afternoon stood and gave their home-state hero the ovation they’d been waiting to shower on him.

The cheers were long and loud and lingering and made Stricker smile as he approached the green with his wife, Nicki, who caddied for him.

“Yeah, walking up there, that was pretty special,” Stricker admitted. “I took a moment there, for sure. I don’t get that too often. I hear Wisconsin fans wherever I go around the country and that’s a cool feeling to have. It was a special feeling walking up on 18 today.”

They weren’t saying goodbye, because that would be too difficult. Nobody in the stands, even if they were aware of the significance of the moment, was willing to admit that this might be some kind of ceremonial curtain-call.

The par-saving putt Stricker rolled in a few minutes later might be the last stroke he ever plays in a major championship but the ovation was simply a thank-you, not farewell forever.

Stricker is 48. He is not giving up golf. But since he didn’t finish among the top 15 in the 97th PGA, he did not earn a spot in next year’s tournament. And thus, he is not currently exempt to play in any of the four major championships in 2016.

He was five under through 12 holes, thanks to three birdies in a row starting the back nine, and was on a roll. One or two more shots under par, he figured, would get him safely in the top 15.

Then he made a double bogey at the 14th hole that dashed his hopes. His approach rolled into a poor lie in a bunker, and he barely got the ball out and into the long stuff, where it was teetering several inches in the air on the blades of grass. He pitched on but missed the bogey putt and now, his 2016 golf itinerary is major-less.

He will not qualify for the FedEx Cup playoff series, either. When he was asked when he was going to play next, Stricker was stuck for an answer.

“Good question,” he said. “I don’t know.” He thought about it for a few long seconds. “Probably the Shark Shootout in December,” he decided. 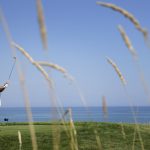 This was not an exit. The U.S. Open comes to Wisconsin in two years, at Erin Hills outside Milwaukee. Stricker said he will definitely try to qualify for that. He is optimistic about his game and how his back held up this year after surgery while playing a reduced schedule. He said he is looking forward to playing a little more tournament golf next year, a good sign. Of course, he’s not looking forward to that nearly as much as having no golf obligations whatsoever as the next deer-hunting season approaches or as he watches his two daughters get ready to go back to school in Madison.

He has good golf yet to play, he believes, and yes, he would like to return to that inner circle of elite golfers who routinely get invites to the majors and the World Golf Championships and all the perks that go with them. He is still fully exempt for the PGA Tour regular season, which he’ll take up in 2016, but not for the big events.

“It hurts when you don’t play in some of those, for sure, when you’re watching Bridgestone a couple of weeks ago,” Stricker said. “That’s one of my favorite tournaments. You play some majors on a regular basis and all of a sudden, you’re not in them.

“But I chose this path. I knew this was probably going to happen at some point. You slowly fade away out of that exemption area. I’m still committed to what I’m doing, playing a limited schedule, and I’m still enjoying that. But I also know that I’ve got a lot of good competitive golf in me. My ultimate goal is to get back in the winner’s circle. I’ve got to shore up a couple of things first.”

The biggest priority, believe it or not, is his putting. That was the strength of his game for most of his career. He was such a good putter that he was the one player that Tiger Woods sought out for putting advice. This year, the putting stroke deserted him. Maybe it was age, maybe it was the reduced playing schedule, maybe the back surgery caused him to make a subtle posture change that he didn’t even realize, who knows? He just knows that his greatest weapon turned into a liability this year and that was a shock. He switched to a different putter this week and achieved some good results. His ball-striking was better this year than it has been in a few years, he’s been driving it well but his scoring skills just weren’t what they were. Is that age or inactivity? He may get the answer next year. He is already talking about playing some early West Coast events in 2016, something he seldom does. Maybe Hawaii, maybe Palm Springs. “My kids and my wife, they’re all looking to get out of Wisconsin in January,” Stricker joked, “so it might be a good early trip to make.”

This golf season was a test, he said, to see how his surgically repaired back would hold up after the operation last December. He never pushed it, he played tournaments on back-to-back weeks only once, and it seems to have been a good decision.

“I felt stronger, I have a lot more pop on some of my shots,” Stricker said. “I’m hitting my driver probably longer than I have the last four or five years. I feel stronger. So I feel like I passed the test.”

“That’s a tough question,” he said. “I’m not going to give up trying. I’m going to continue to try to get in these majors. But I don’t know. It could be my last.”

Once he finished with his media obligations, Stricker was headed for the locker room and then the clubhouse parking lot. He and Nicki and their daughters, Bobbi and Izzi, would drive two hours back to their home in Madison.

“We had a great time this week,” Steve said. “Nicki said out there, I wish I could caddie for you all the time.”

That, too, brought a smile to Stricker’s face.

“So that’s pretty cool,” he added.

A moment later, he walked toward the clubhouse like it was any other Sunday.