14 books every self-respecting golfer should read

If you really love the game, you appreciate a good read, and not just the kind your caddie gives you. Here they are: 14 golf books that belong in every golfer’s library.

Hogan looked for answers in the dirt. Then he wrote them down in this sharply focused volume, laying out the fundamentals of golf’s most famously repeatable swing. Do exactly as he tells you. Then do it again, several million times.

You could call it a kiss-and-tell, but it’s more thoughtful than that. During his six years working as Tiger’s swing coach — a period during which Woods claimed six major titles — Haney was at his famous student’s side both on and off the course, assessing his mechanics but also trying to figure what made Tiger tick. The coach is frank about all that he found troubling. But for all his criticisms, he is also on a quest to understand. The portrait that emerges is complex, human. Tiger’s biggest fear on the course was of hitting “the big miss” — a shot so wild it would wreck the round. But as Haney demonstrates, the phrase also works as metaphor.

3. The Greatest Game Ever Played

The year: 1913. A blue-collar kid named Francis Ouimet, who grew up across the street from The Country Club in Brookline and who learned to play the game there as a caddy, enters the U.S. Open at that very course, and against all odds, wins the title, beating two of the world’s best players in an 18-hole playoff. With a 10-year-old caddie on his bag. You can’t make this stuff up. Lucky for Mark Frost — and for us — the author didn’t have to.

By Leslie Nielson and Henry Beard

Good golf is elusive. But terrible golf? That’s within your reach. Your guide in this pursuit is the late, great comic actor Leslie Nielson, who played the bumbling Lieutenant Frank Drebin in the Naked Gun series but was hapless in real life on the golf course, too. Here he shares the secrets of abject mediocrity and mendacity, with tips on everything from fudging your score to exasperating your opponent. A firm believer in the fundamentals (“always hold the club at the thin end where that length of rubber stuff is, and not the end that has that curvy metal or wooden thing with the number on it”) Nielson also understood that intangibles are frequently what matter most. Hence his breakdown of a handy move like “the brusharoo,” an unnerving tactic in which the driver of a golf cart steers so close to trees and hedges that he almost sweeps his passenger out of his seat.

5. Golf is Not a Game of Perfect

The most important distance in the game is the space between your ears, and the best book about the region is by Rotella, the mental game guru known for his work with the likes of Nick Price and Davis Love. Mixing anecdotes with vivid observations, Rotella delves deep without drifting off into psycho-babble. His tone is conversational, his advice pragmatic, and the insights applicable beyond the course. “Confidence is crucial to good golf,” he writes. It is also “simply the aggregate of the thoughts you have about yourself.”

6. Golf in the Kingdom

Depending on whom you ask, this 1971 novel about a young traveler’s encounters in the Scottish Highlands with the golf pro-cum-mystic Shivas Irons is a either a rollicking tale imbued with deep spiritual meaning, or a bunch of New Age blather with a whiskey kick. We’re not taking sides, except to say that it’s a must-read if you want to take part in the grillroom debate.

7. The Bogey Man: A Month on the PGA Tour

A weekend hack embeds himself inside the ropes and lives to tell about it. A lot of golf writers have tried this device, but Plimpton did it early and he did it best, with a colorful account that features not just players but oddball caddies, frank-talking officials, cocktail-clinking fans and assorted hangers-on. He was fortunate to be working in a less guarded era, when access to the Tour was less stage-managed. But mostly he was lucky to be George Plimpton, a bemused observer with an eye for the absurd, blessed with a nonpareil writing style.

8. To the Linksland: A Golfing Adventure

Less than midway through his life’s journey, Michael Bamberger quits his job as a newspaper sportswriter and lights out across the pond on a voyage of discovery that doubles as an inquiry into the game. Along the way, he caddies for a talented oddball, plays some of the world’s oldest courses and absorbs the wisdom of a Scottish sage. It’s the sort of trip you wish you’d made when you were younger. Thanks to Bamberger’s lyrical prose, you’ll feel as if you did. [Full disclosure: Bamberger is now a senior writer for Sports Illustrated and GOLF.com contributor.]

9. The Match: The Day the Game of Golf Changed Forever

When is a friendly four-ball more than a friendly four-ball? When the players are a quartet of history’s greatest, and the venue is Cypress Point. True to its title, The Match is an account of the folkloric duel between the amateur stars Harvey Ward and Ken Venturi, and the professional legends Byron Nelson and Ben Hogan. But the book also breaks from the on-course action to tell a broader story about the birth of Cypress Point and the origins of the Crosby Clambake, all the while depicting a sport in transition, its axis tilting away from its amateur roots. The result is a rich cultural history, highlighted by some of the finest shotmaking the world has ever seen.

10. Final Rounds: A Father, A Son, The Golf Journey of a Lifetime

“Golf is mostly about who you choose to play with,” writes the author, whose partner in this book is his dying father, Brax. Learning that the elder Dodson’s cancer has returned, leaving him with mere months to live, the two men set off on a golf trip to the venerable links of Scotland and England. The game has always been a bond between them, but never more so than on this journey, which plays out on the course but also in the pubs, where Brax tips back pints with locals and displays a sunny outlook that, Dodson writes, would have “taught the entire Hemlock Society the power of positive thinking.” Given its content, you might expect the book to be a sappy read, but Dodson goes easy on the syrup, leaving room for the story’s bitter-sweetness to come through. Golf is like life, it’s often said. Final Rounds lays the similarities bare.

11. I Call Him “Mr. President”: Stories of Golf, Fishing, and Life with My Friend George H. W. Bush

Un unlikely friendship sprouted between Ken Raynor and President George H. W. Bush, and Raynor’s I Call Him “Mr. President” brings you inside their relationship that led to countless stories and memories on the golf course. Raynor, the long-time head pro at Cape Arundel Golf Club in Kennebunkport, Maine, and Bush met during one of the president’s annual summer sabbaticals. The friendship continued from there, and here Raynor reflects on his rounds and experiences with Bush, who passed away on Nov. 30, 2018. The duo played everywhere (Augusta National and on the White House putting green, to name a few) and Raynor even played with him in Bush’s final round as president. A new, updated version of the book was recently released to reflect events since the president’s death.

Like a high-handicapper hacking through 18, golf writing covers a lot of ground. This anthology covers the wide-ranging genre, gathering up works of short fiction, humor, history and instruction by the likes of P.G. Wodehouse, Bernard Darwin, Gene Sarazen, Henry Leach and on. No matter the subject—the personality quirks of a star player; the idiosyncrasies of his swing — golf, you realize, makes good copy, interesting enough even for non-golfers. Let’s be honest, though: the pages devoted to golf architecture are probably best left to hard-core devotees.

13. The Dogged Victims of Inexorable Fate

If you’re unfamiliar with early Jenkins, here’s a fine excuse to acquaint yourself: a collection of reportage, essays and reminiscences by one of golf journalism’s all-time greats. Any press room flunky can report the facts; Jenkins does so while being flat-out funny — a skill he demonstrates in myriad forms, whether he’s recapping the action at Augusta or recounting his own rounds on a “windy, dusty, indifferently mown, stone-hard, broomstick-flagged, practically treeless, residentially surrounded public course” that he and his pals called Goat Hill. Far too much golf writing is blindly reverent. Jenkins never sucked up (“I keep getting invited to Winged Dip and Burning Foot and all of those fancy clubs we sophisticated New Yorkers are supposed to frequent … but I usually beg off) but he also resisted cheap shots, and he showed respect where it was due. Among the most compelling passages in the book captures the allure of Arnold Palmer, whom Jenkins describes as “the most immeasurable of all golf champions,” not because of all he won but because of “the nobility” with which he lost and the “unmixed joy he brought to trying.” The King, Jenkins concludes, has been “the doggedest victim of us all.”

14. Harvey Penick’s Little Red Book: Lessons and Teachings from a Lifetime in Golf

By Harvey Penick with Bud Shrake

“Select one club, perhaps a 7-iron, and love it like a sweetheart.” When it comes to golf instruction, it isn’t always what you say but how you say it. And no one said it better than Harvey Penick, the homespun poet of the practice range. In the span of a long life given over to the game, Penick showed a knack for making golf sound simple, whether he was working with a major winner (Ben Crenshaw, Tom Kite, Mickey Wright were just a few of his famous pupils), or helping a first-timer get the ball aloft. At the end of every workday at Austin Country Club, where he served as the head pro for nearly 50 years, Penick made a habit of scribbling tips and observations in a red spiral-bound notebook. “Take dead aim.” “Swing the club like a weed cutter.” “Sit next to good golfers at dinner time; their confidence will make you a better putter.” Late in Penick’s life, those pearly phrases became the source material for what now ranks as the best-selling golf book of all time. 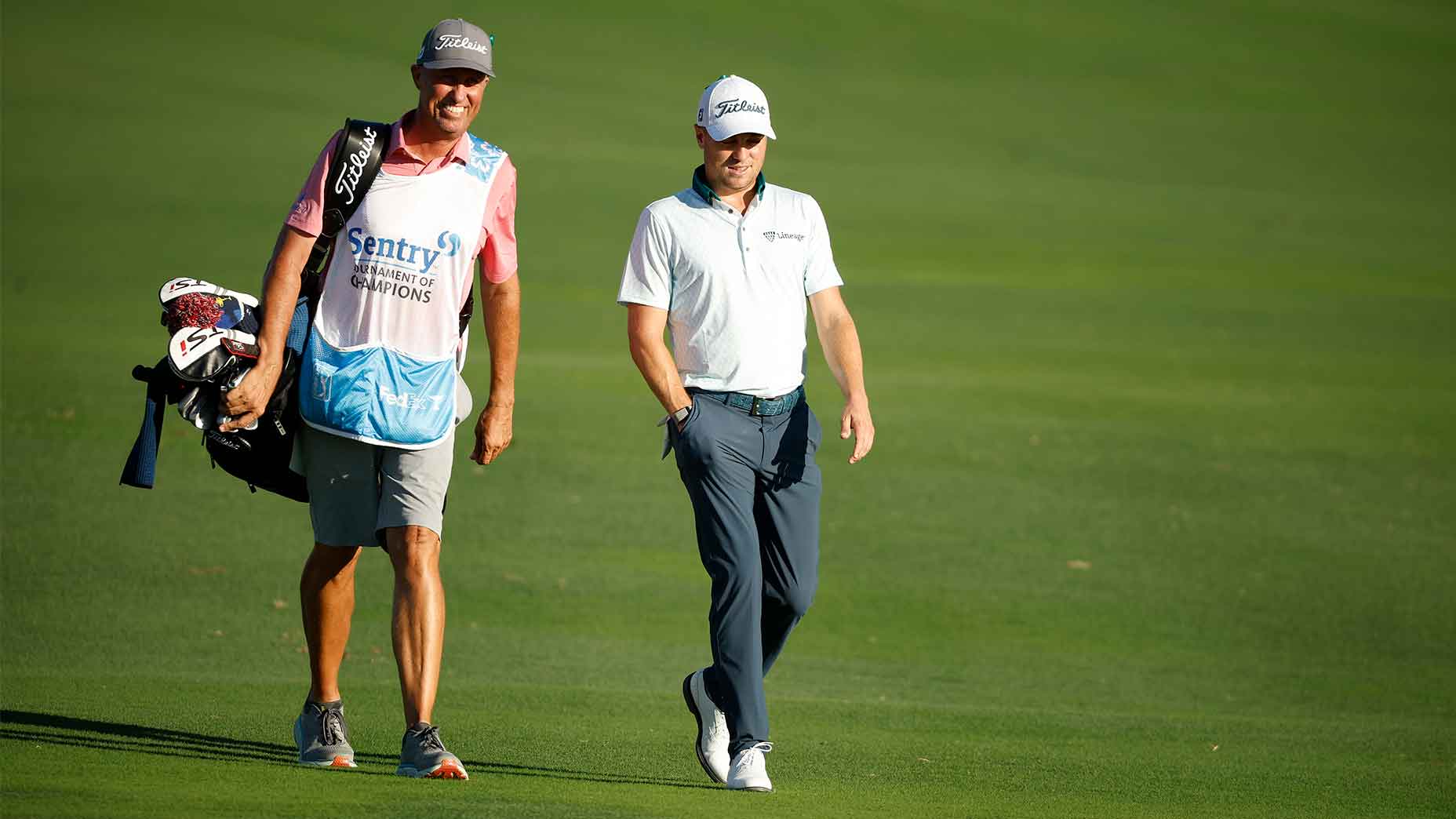 ‘Dude, I want you to’: How Justin Thomas courted Bones Mackay to become his new caddie 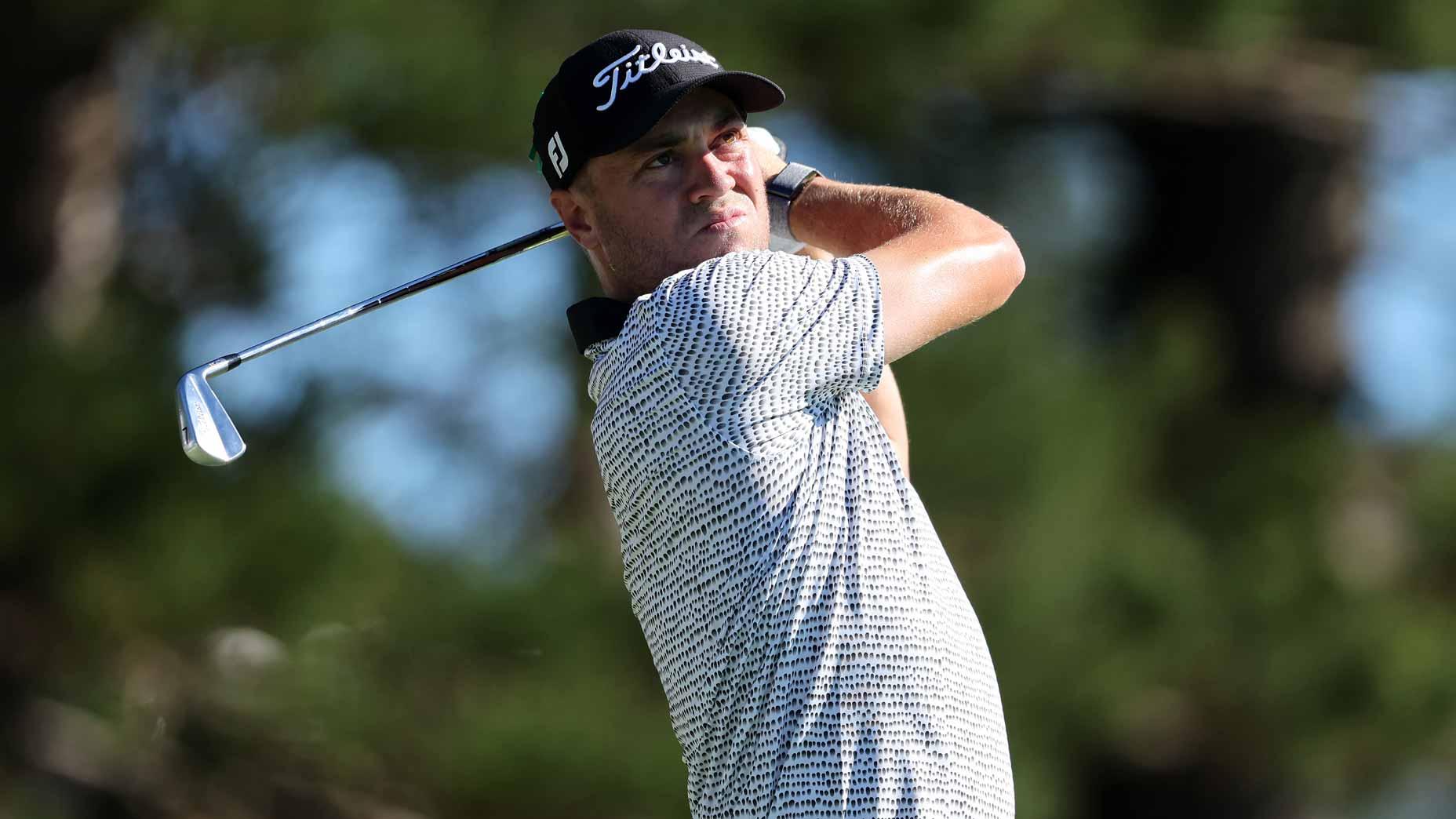 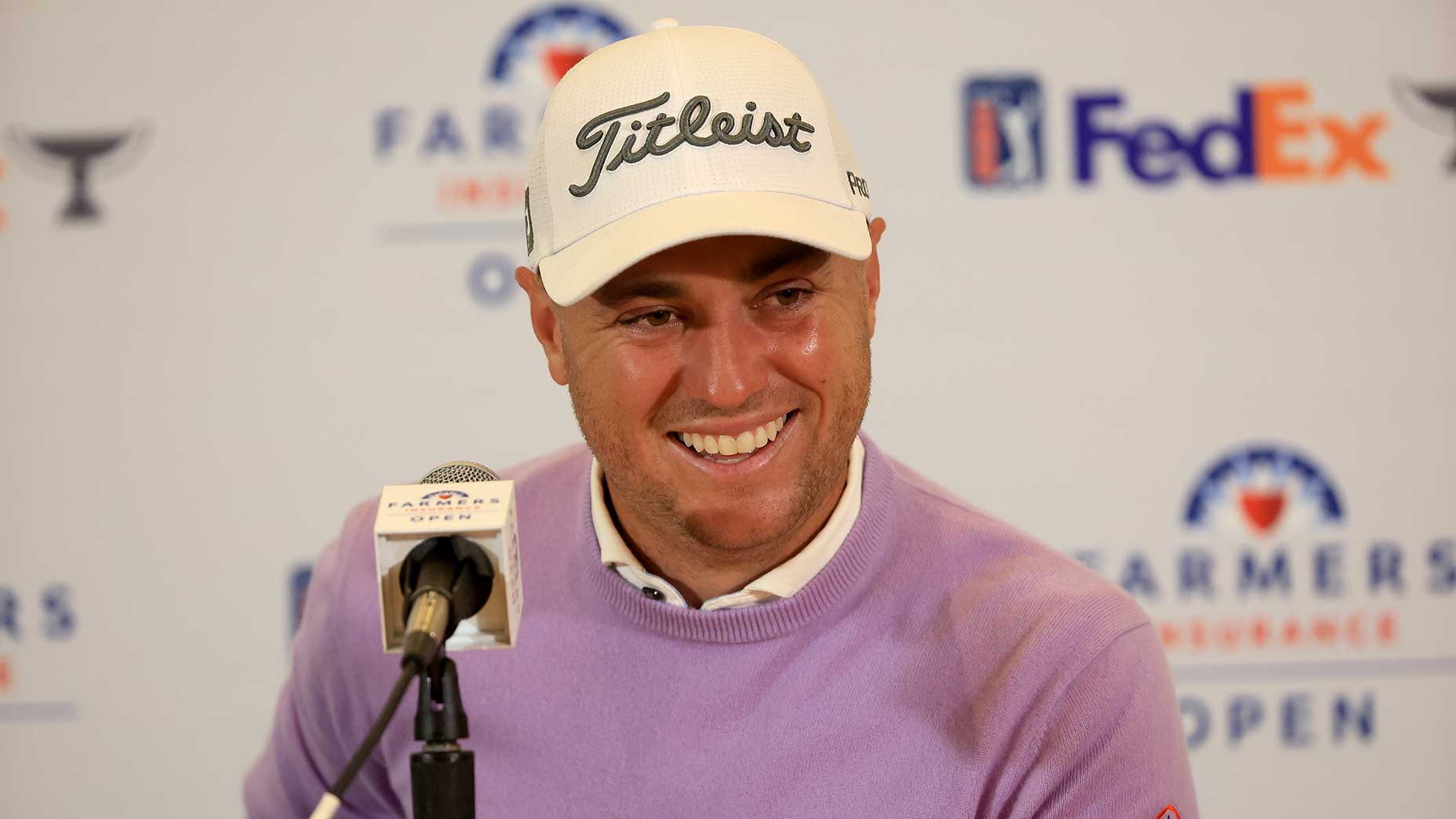 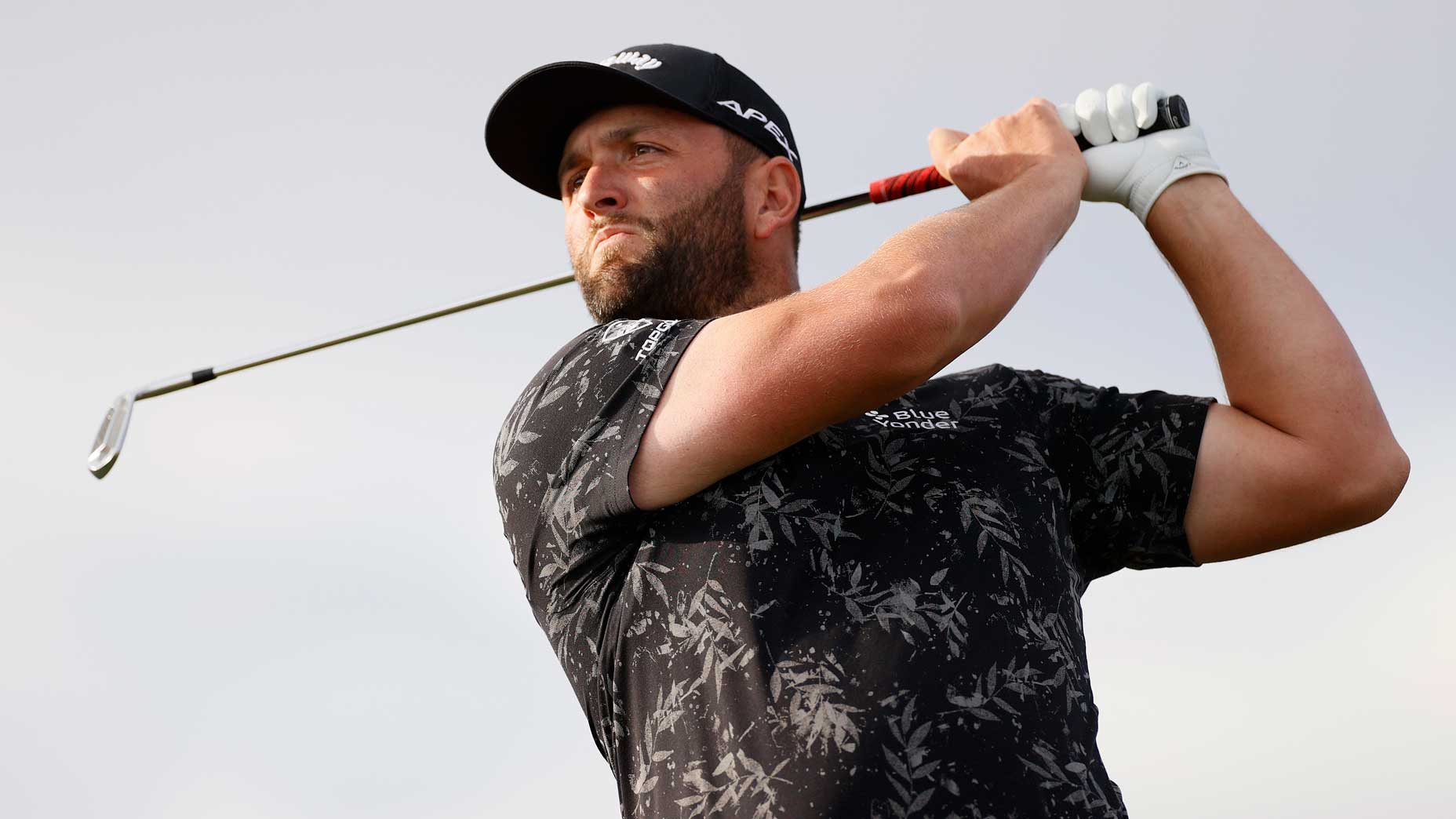 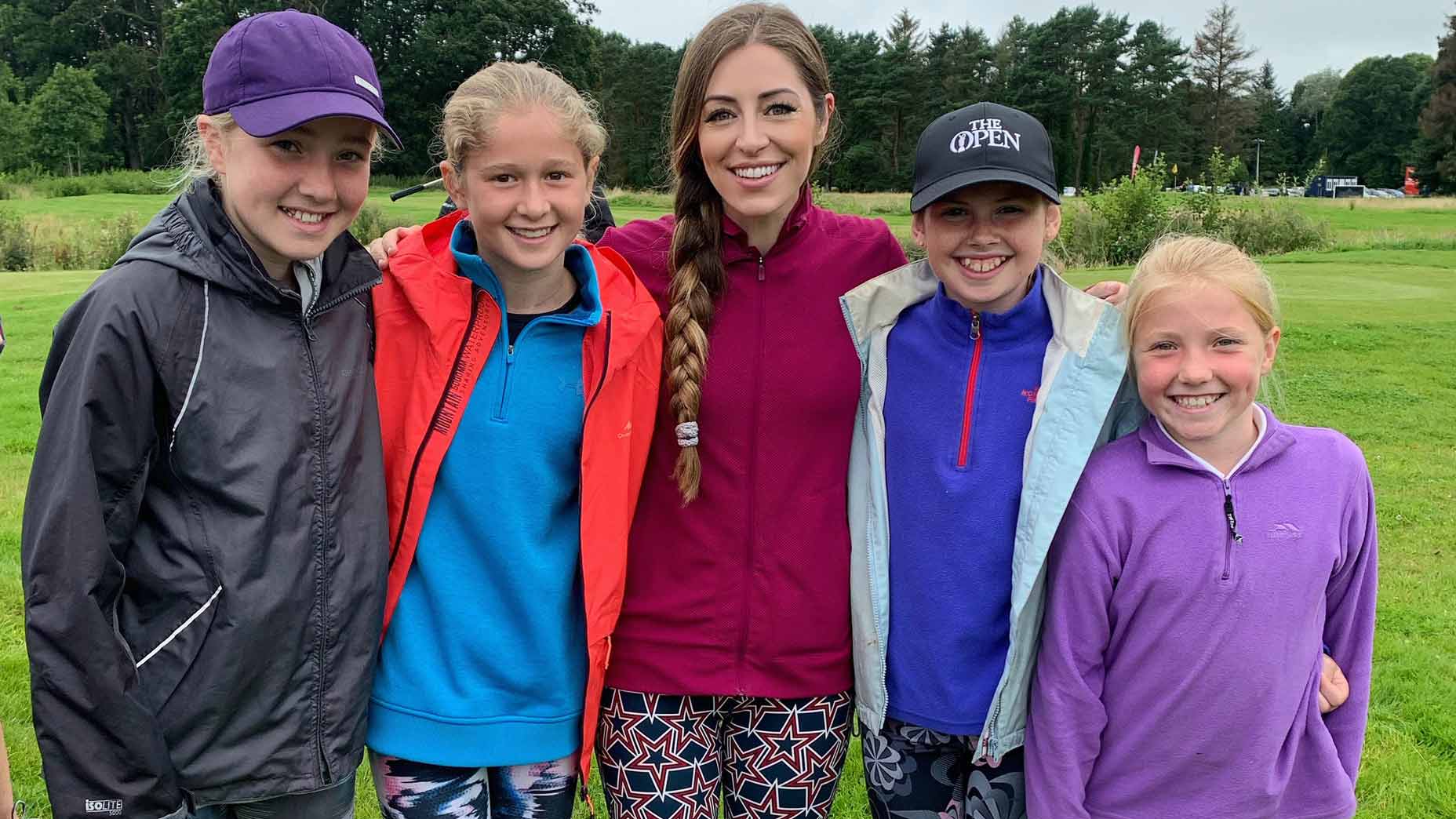