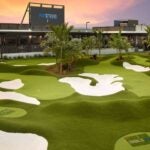 At Popstroke, Tiger’s designs will tease out the fun.

In the era of prodigious purses and savvy strategic thinking, pro golfers are making it their business to be in business outside of their sport, while show-biz stalwarts and superstar athletes like Steph Curry, Peyton Manning and Andy Roddick are discovering that the smart money is in golf itself. In our Golf & Business package (which you can also find in the Jan/Feb 2022 issue of GOLF Magazine), we’ll go inside their wallets.

It’s official: Rolling the rock is hipper than ever. In-vogue putting courses are popping up in every major city in the country, where careening 15-footers is just the beginning of the fun. In much the same way that Topgolf and Drive Shack provide bowling-alley-like hangs for full swingers, a growing number of putt-putt entrepreneurs are creating high-tech pleasure domes for flatstick-wielding fun seekers.

Rory McIlroy’s investment company Symphony Ventures is, in partnership with Drive Shack Inc., a major backer of Puttery, where adults gather indoors to eat, drink, socialize and throw down in a sort of mini-golf-meets-Clue gaming experience. The concept — a freewheeling putting party where players roam from room to room (the Lounge, the Library, the Rooftop, etc.) to compete on four buzzy, elaborately designed nine-hole courses — debuted in Dallas last September. Locations in D.C., Charlotte, Houston and Miami are now in the works.

McIlroy, for one, is thrilled. “I’m delighted with the initial success,” he says. “I’ve been collaborating with the Drive Shack team on Puttery for more than two years and seeing it come to life is very satisfying.”

Among McIlroy’s main competitors in the space is also one of his biggest inspirations: Tiger Woods, who has partnered in a venture called Popstroke. Woods is offering more than just his name, though — he’s the designer of all future Popstroke courses. Seven sites across Florida, Arizona and Texas are scheduled to open this year.

This golf-y slice of “eatertainment” is now a legit smorgasbord. After a recent $60 million infusion of cash, Puttshack — from the founders of Topgolf — has nine locations either already launched or on the way. Smaller shops, like Big Mini Putt Club in Chicago and Urban Putt in San Francisco and Denver, are also on a roll.

The good thing about a crowded mini-golf marketplace? Now you can tilt at windmills almost anywhere — and anytime.