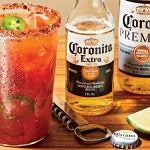 A michelada is the perfect refresher for Cinco de Mayo.

He was a barrel-chested, good-natured fellow who oozed testosterone and breathed as if every gulp of air was a cleansing breath. He had a gravelly voice, and after growling a sentence he would repeat the gist of what he’d just said. On Seinfeld they might have called him the Twice Talker or the Double Speaker, but in the caddie yard we called him Rob Kaufman Rob Kaufman the guy who says everything twice twice.*

Rob Kaufman Rob Kaufman had some doozies in his arsenal. When any putt came up just short, he would scold himself and the ball with a rousing cheer used by fans of a local high school’s team. “A little harder, Penn Charter! A little har-der!”**

If Rob Kaufman Rob Kaufman smoked a drive, his robust phraseology, suddenly and while the ball was in flight, shifted south of the border. “¡Órale! ¡Órale!” (Translation: C’mon! or Alright! Take your pick.) Very recently, I was having a laugh laugh thinking about that line when it occurred to me that Cinco de Mayo is approaching, which in turn prompted a thought about another nickname: Redeye, which itself is a nickname for a michelada, a drink that originated in Mexico.

Redeye’s given name is Vince, but his siblings and many old friends call him Bud. To his wife, he is Red, because he has red hair. He was occasionally called Redeye by other kids hanging on the corner in Philly, but that version of his nickname became more widely used when a friend’s father noted he was a deadeye darts player, and Red plus deadeye equals Redeye. Then came the golf tournament.

On a Monday in 1970, Bud organized a little golf outing for some of the boys from the corner. It was Flag Day, and Bud was newly released from the U.S. Army, where he’d been a Ranger and served in Vietnam until he had an especially bad day there. He was flown home in a body cast and likes to joke that the first thing his father said upon seeing him in the hospital was “I told you to join the Navy.”

He once related to me the moment he had his first beer upon being stateside, on a bus transporting him to the military hospital. He derived more enjoyment from just talking about that beer than I ever have actually drinking one. Bud being Bud, which is to say one of the more amazing people you could ever hope to meet, the real champion of the outing was the player with the highest score. The prize was a case of Schmidt’s, a now-defunct Philadelphia beer. The nine players drank the beer in the parking lot. One of the guys brought along logoed balls as a gift for everyone: REDEYE OPEN.

The Redeye lasted for 16 years, and, again, Bud being Bud, he would invite 20 friends and tell them to fill out their foursome.

After a brief pause, the Redeye Open returned as a father-son event for six years. I was joking with my brother Whitey recently that the Redeye was one of our majors back in the day. The Redeye trophy, which Bud bought for $10 at a Goodwill store, sits on a shelf in his garage, two doors up the road from the house my father built, adjacent to what used to be the public course where I spent countless hours of my youth.

I’m going to mix me up a michelada this Cinco de Mayo, and when my wife yet again asks her favorite moron what he’s doing, I’ll say, “Making a Redeye!”

Hardcore michelada recipes skip the tomato juice, but I like the color it adds. While cinco de drinko-ing my Redeye, I’ll think about something Bud says regarding his various nicknames. “It’s never really mattered to me what people call me,” he says. “As long as they smile.”

*Name changed to protect the innocent while preserving the cadence of the nickname.

**The kids on the sitcom The Goldbergs attend the William Penn Charter School, although — another name change! — in the show it’s called William Penn Academy.

Cerveza and tequila are the cornerstones of celebrating Cinco de Mayo (along with some freakin’ killer food — grilled Mexican street corn for sure!). The classic tequila shot, of course, calls for the lick of the salt first to ease the burn of the liquor (second), and the suck on the lime complements the flavor. If you’re looking to change things up a bit, try some of these. Always start with good tequila, otherwise why bother?

2. Lychee shooter: Put ice in that cocktail shaker, and pour in 3/4 oz lychee liqueur and the same of blanco tequila. Shake that thang! Knock it back! La vida es dulce!

4. Mexican flag: You’ll need a spoon for this. Pour 1/3 oz grenadine into your glass, then float 1/3 oz tequila, then float 1/3 oz creme de menthe. To float the booze, pour it over the back of a spoon and let it drizzle into the glass. Esto no sabe a bandera!

Michael Corcoran thinks it’d be a better idea to celebrate during all of Mayo, not just on cinco.

Shop our selection of beverage cups and tumblers