Those stubborn brown patches in your yard? Here’s what might be causing them 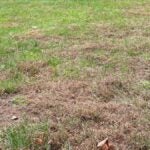 What's behind these mysterious brown patches?

In a new twist on our Super Secrets series, we’re asking golf-course superintendents to help solve real live lawn-care problems that homeowners are facing across this great land. First up: unsightly brown patches!

Not every picture is worth a thousand words, but most deserve at least a bit of commentary.

Take this photograph of the New Jersey backyard belonging to a member of GOLF.com’s editorial staff.

Try as he might (by which we mean watering, fertilizing, and aerating at appropriate times), our colleague just can’t seem to get brown patches on his home turf looking right. “I promise I’ve followed all the rules,” he said.

What’s he doing wrong? To know for certain, he’d need to hire a lawn-care specialist for an on-site visit. Meantime, though, we’ve sought expert input from afar.

Chuck Barber is a 19-year member of the Golf Course Superintendents Association of America and the superintendent at St. Charles (Ill.) Country Club.

Based on the photographic evidence, Barber gave us an educated guess at a diagnosis, along with three key pieces of lawn-care wisdom.

Maybe his insights apply to your yard, too?

Barber concedes that superintendents are Bunyan-like figures, at least in their approach to tree removal. But not without good reason.

“The first thing I’ll say is, ‘Cut down the darn trees.’” The Lorax might not like it, but facts are facts, Barber says. “And you’re not going to grow super-healthy turf in heavy, evergreen shade.”

2. Three is the magic number

“Healthy turf requires three things,” Barber says, “Sunlight, drainage and air movement.” He calls them the Holy Trinity of Turf. By that measure, our staffer is dealing with conditions that are far from divine.

For starters, Barber points out, “the area appears to be well below the road in the background, which would lead me to believe that surface and subsurface drainage are a limiting factor. Couple that with the trees, and the lawn already has two strikes against it. Often, Barber says, “limiting factors” such as shade and drainage are impossible to address sufficiently. Still, he adds, “the homeowner may want to consider addressing as much of the limiting factors as possible.”

Lawns, like people, are partly a product of their environment. In compromised conditions, Barber says, turf grows weak and shallow-rooted. Consequently, “it can’t withstand the rigors of environmental stresses such as saturation, drought or high temperatures.”

Nor does it fare well under heavy usage. “Imagine if there is any traffic on the lawn from kids’ activities or parties,” Barber says. “That will kill the lawn double good, and double quick.”

Working from afar, Barber says that he was forced to make several presumptions. But his educated guess is that the lawn is suffering from fungal disease called gray leaf spot, on a site “compromised by a poor growing environment.” Which leads him to a larger turf-care truth: “Your readers should learn that if you optimize the growing environment, grass generally does really well, without much attention.”

The 5 best beers to pair with barbecue, according to Pinehurst's head brewer

10 winter-resistant plants that will add color to your yard