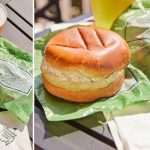 AUGUSTA, Ga. — There are a few trending phrases at Augusta National this spring.

Breaking news has been replaced by breading news at the 2021 Masters. The menu is expanding. Waistlines are sure to follow. The new sandwich joins the Classic Chicken, the Masters Club, the Egg Salad, the Pimento Cheese, the Ham and Cheese on Rye and the Turkey and Cheese on Wheat. There was chicken salad before, but it was served in a wrap, excluded from the conversation. The brioche bookends mark its call-up to the big leagues.

Believe it or not, there’s actually a point to this article beyond its existence as a vehicle for gluten puns. (Most of ’em are corny, anyway.) The new sandwich — and its rollout — actually means something. It tells us about the Masters and about Augusta National. You can learn a lot from the way a club touts its mayonnaise.

For starters, the sandwich suggests that the crowds this week will be significant. Augusta National never releases attendance figures, and they’ve been particularly tight-lipped about this year’s patron-picking process. But you wouldn’t break out a new food item for a fan-free golf tournament any more than you’d debut a nightclub over Zoom. There are other signs of significant crowds (like the full parking lots outside the gates, or the large number of people actually walking the grounds), but the sandwich confirms it.

The sandwich reminds us of Augusta’s attention to detail. It comes in a green wrapper, like the other food offerings, so that an escaped bit of plastic wouldn’t show up on a TV screen. The trash bags are green, too, as are the patron chairs and the sacks of range balls and tournament-provided masks and the seed that’s used to fill divots. Green tends to blend in around here.

The selection of sandwich suggests Augusta National is open to evolving. For years we’ve been force-fed the idea that egg salad in 85-degree weather is somehow a good idea or that pimento cheese can be the centerpiece of a signature sandwich when in reality pimento cheese doesn’t need to exist, period. The new sandwich immediately joins the upper echelon of Augusta’s concession power rankings. Ham and Cheese on Rye seems suddenly dull by comparison. Change comes slowly to this club, but it’s coming bit by bit — and, yes, bite by bite.

But the most interesting thing that the chicken salad sandwich tells us is that Augusta National has become fully self-aware. The club and tournament have long embraced cutting-edge technology; their deep interest in the content game has been a more recent development. On Monday, the Masters Instagram account rolled out the chicken salad sandwich in an official post.

“New to the most famous fare in golf, Chicken Salad,” the caption read.

There is a vague possibility that you don’t give a single Hootie Johnson about Masters concessions. That’s hardly disqualifying as a fan; there’s no requirement that you care about chicken salad sandwiches on brioche any more than you care about Hudson Swafford’s putting routine.

But here’s the thing: You probably do care, even if you can’t explain why. I can’t exempt myself, either: I care, too. We’re collectively curious about Augusta National’s food offerings. Their prices (low), their quality (high), their relative tastiness (the chocolate chip cookies, then everything else). And now, the Masters knows that we care. They’ve leaned into it. They posted the new sandwich on Instagram for the same reason they co-produced a minutiae-focused documentary. They’ve been releasing short, minimalist clips of things like planting flowers, cutting grass or fluffing pillows — and we’ve eaten them up.

In one of those videos, Director of Communications Steve Ethun explains the approach. “If you could focus on your job 51 weeks a year and execute on it one week a year, just think how good you would be. And that’s how fortunate we are at Augusta National. Here, perfect is just good enough.”

That kind of sums it up, huh? The secret of Augusta’s concessions is that none of them would look out of place in a well-packed school lunchbox. Augusta National takes relatively simple concepts and goes over the top on execution. The club isn’t going to release its chicken salad recipe much sooner than it’ll release its list of members, but that doesn’t mean there’s anything particularly secret about it its ingredients. Chicken. Mayonnaise. Celery. Onion. Pepper. Probably not much else. Simple done right.

The lead-up to Thursday at the Masters is typically filled with conjecture and guesswork. I hear Jordan Spieth speak with confidence about his game, but I can’t tell you if he’ll finish inside the top five this week. I see Brooks Koepka limping, but I can’t tell you to officially disqualify him from contention. The course is playing tough on Tuesday, but there’s no guarantee how it’ll look come tournament time. Uncertainty reigns.

For that reason, it’s nice to bring you some cold hard facts from on the ground. I can tell you with great certainty that the chicken salad on brioche is delicious. I can tell you that there’s slightly too much brioche near the sandwich’s borders but that the bread-to-chicken ratio improves to near perfection the closer you get to the center. If you eat your way from the outside in, you’ll save the best for last.

We can only hope the tournament measures up.