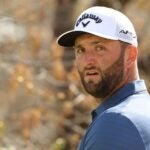 When he’s not competing on Tour, Scottsdale, Ariz. resident Jon Rahm enjoys spending his downtime at the ultra-luxe Silverleaf Club, where he likes to engage in some fun, recreational matches with an impressive roster of partners, including former NFL quarterback and fellow ASU alum Brock Osweiler.

On this week’s episode of Subpar, Osweiler told hosts Colt Knost and Drew Stoltz that occasionally those matches have led to the suggestion of some interesting wagers — including one Rahm said he simply couldn’t agree to.

“Usually when we have these games, I do get Jon on my team,” Osweiler began. “I need the extra help. There was one time where I wanted a head-to-head bet with him. And so, we’re sitting on the first tee box and he goes, well what do you want to play for? And I’m like, well you don’t need money.”

Osweiler said he decided to suggest something a little more creative.

“I go, ‘If I beat you today, I get to carry your bag in the Par 3 Contest at Augusta,'” Osweiler said.

“…And [Rahm] chuckled and he goes, ‘Listen, I’d love to do that, but Kelley [Rahm’s wife] would kill me. Kelley’s on the bag.'” Osweiler said. “So, it didn’t really go anywhere. We did our normal little Nassau.”

For more from Osweiler, including how he says golf lessons almost wrecked his swing, check out the full interview below.