USGA chief: ‘We do not think increased distance is good for the game’

Exactly what should be done to address that issue remains an open question.

“We do not think increased distance is good for the game,” Davis said, citing the relentless pressures courses face to increase total yardage and expand their properties, leading to increased costs to battle the threat of irrelevance. “We’ve watched these footprints grow. What good has it done?”

Davis did not mention any single factor dictating the increase in distance and also made it clear that the issue is not a new one. He said questions of distance have been debated about and researched at USGA board meetings as far back as the 1920s. Still, the comments of Davis and his colleagues made it clear that addressing the issue is more pressing than it has been in the past.

“We all love hitting the ball far, but distance is all relative,” he said. “I remember watching Jack Nicklaus, when he really got a hold of one maybe it went 280. That was the long ball then, and the long ball now is a lot longer.”

Any potential rules change limiting technology would be sure to cause a stir among equipment manufacturers, who Davis said will be consulted throughout the process. But he was clear that he sees the issue of distance as a threat to the game at every level.

“This isn’t just about the male elite game,” he said. “It just isn’t.”

He also referenced changes that one of the country’s oldest courses has undergone over the past century. 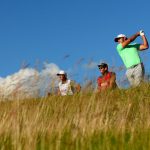 You may also like A 9,000-yard course would be nuts, but it’s also fast becoming a necessity

“An astonishing, perhaps even sobering example close to home will be this summer’s U.S. Open at Shinnecock Hills that will be played at over 7,400 yards,” Davis said. “One hundred and twenty-two years ago at the 1896 U.S. Open, care to guess Shinnecock’s total yardage? 4,423 yards. Now, don’t read too much into that – I don’t want to see a headline next week saying the USGA is proposing going back to hickories and gutta-percha balls in the future, but it does make you wonder what golf courses will look like if we stay on this trajectory.”

The incoming USGA President, Mark Newell, also mentioned the need to address the “difficult, timely issue of distance,” although he did not get into specifics.

“We see a future where a player’s score continues to be fundamentally dictated by his or her athletic and course management skills, not just an over-reliance on equipment and technology,” Davis said.