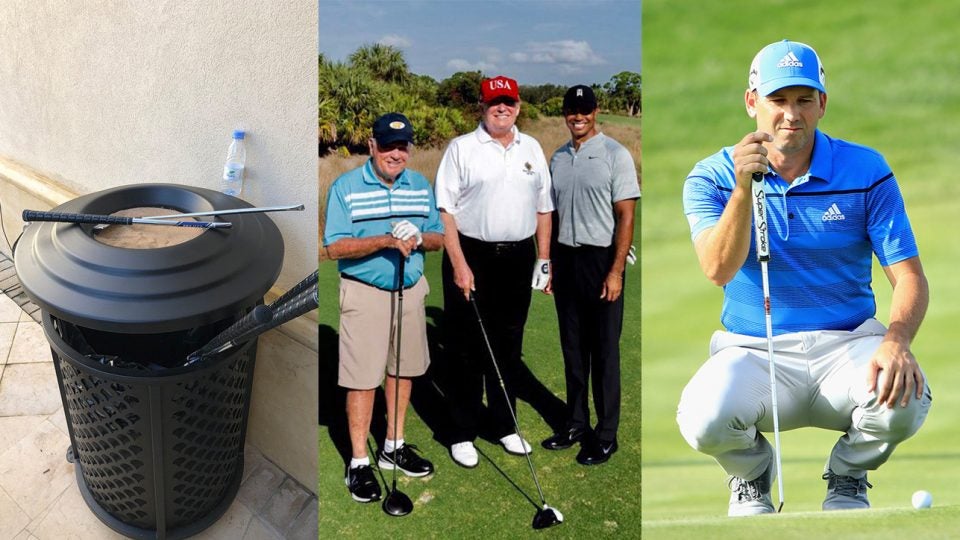 1. The golf group everyone was talking about this week didn’t play on the PGA or European tours. President Trump was joined by Tiger Woods and Jack Nicklaus on Saturday at Trump National. I mean, imagine being the starter that had to call that group to the tee?! The most powerful man in the world playing with the two most powerful men in golf. There are a few caddies out there who I would love to speak with about these conversations…

How’d the round go? Trump broke it down and made a Tiger prediction.

Everyone is asking how Tiger played yesterday. The answer is Great! He was long, straight & putted fantastically well. He shot a 64. Tiger is back & will be winning Majors again! Not surprisingly, Jack also played really well. His putting is amazing! Jack & Tiger like each other.

2. No one has ever played the 16th hole at The Stadium Course better than Amy Bockerstette. Playing alongside Gary Woodland and Matt Kuchar during Tuesday’s Phoenix Open practice round, Amy made a par that meant far more than your standard par. Amy is a Special Olympics athlete who is also the first golfer with Down Syndrome to receive a college scholarship.

Amy’s story is an inspiration for all.

How a superstar named Amy teamed up with @GaryWoodland to win the hearts of the 16th hole crowd @WMPhoenixOpen.#LiveUnderPar pic.twitter.com/iRhZbvdjuP

3. “The biggest party in golf” takes place at TPC Scottsdale every year. This is the lone tournament that encourages a crowd atmosphere unlike any other stop on Tour. Seating at the fabled 16th hole is first come, first serve. Because of that, fans line up in the wee hours of the morning for prime positioning.

What happens when gates open is reminiscent to parents shopping for the “it” Christmas toy on Black Friday.

This crowd is ready to ROCK Sunday at the biggest party in golf! 🍻🥳 pic.twitter.com/qXl5NgOUgd

4. There was a lot of chatter regarding whether pros should have played in the European tour’s event in Saudi Arabia. For one unknown pro, it appears they ended up regretting their decision to play – but not for the reason you might be thinking. Spotted in a trash can was a snapped club along with several other irons. If this isn’t reassuring that golf is hard then I don’t know what is.

Someone clearly did not like his iron play during the final round of the @SaudiIntlGolf. A broken 5-iron and three mid-irons dumped in the garbage bin near the players lounge. @EuropeanTour #frustration pic.twitter.com/rUDDmg12xM

5. We said goodbye to Johnny Miller on Saturday. We also learned the legendary broadcaster’s secret to having such a long, successful career: Canned cheese.

Now we know why Johnny could be so salty at times.

That’s right, it took 30 years, but it was finally revealed that Johnny would squirt cheese into his mouth off the air. Johnny’s legendary status grew to new heights with this revelation.

Now we know what's been making Johnny Miller so salty all these years…pic.twitter.com/fmRxZyWGDv

6. What at first appeared to be a fashion statement by Cameron Champ was later revealed to be so much more. Champ wore one white and one black shoe as a symbol of his background and to honor Black History month.

Celebrating the start of Black History Month with my friends at @nike. I’m very proud of who I am and where I come from. #blackhistorymonth #equality #untilweallwin #grandpachamp #BHM

7. The story of the week was Sergio’s disqualification from the Saudi International. It was a bizarre situation that had social media buzzing bright and early on Saturday morning. Sergio reportedly made a mess of several greens out of anger, though we have yet to see any video footage. In this day and age, that’s remarkable. In the meantime, we’re left to use our imagination (remember what that was like?) to envision what really happened.

Stop dragging your feet and release the video footage already.

Can't find footage of Sergio going berserk on the greens, but there is …. uh… this pic.twitter.com/7AAXWol8gA