Trump Golf marches on in Muslim world despite Muslim ban

By Alan Shipnuck with reporting by Pete Madden 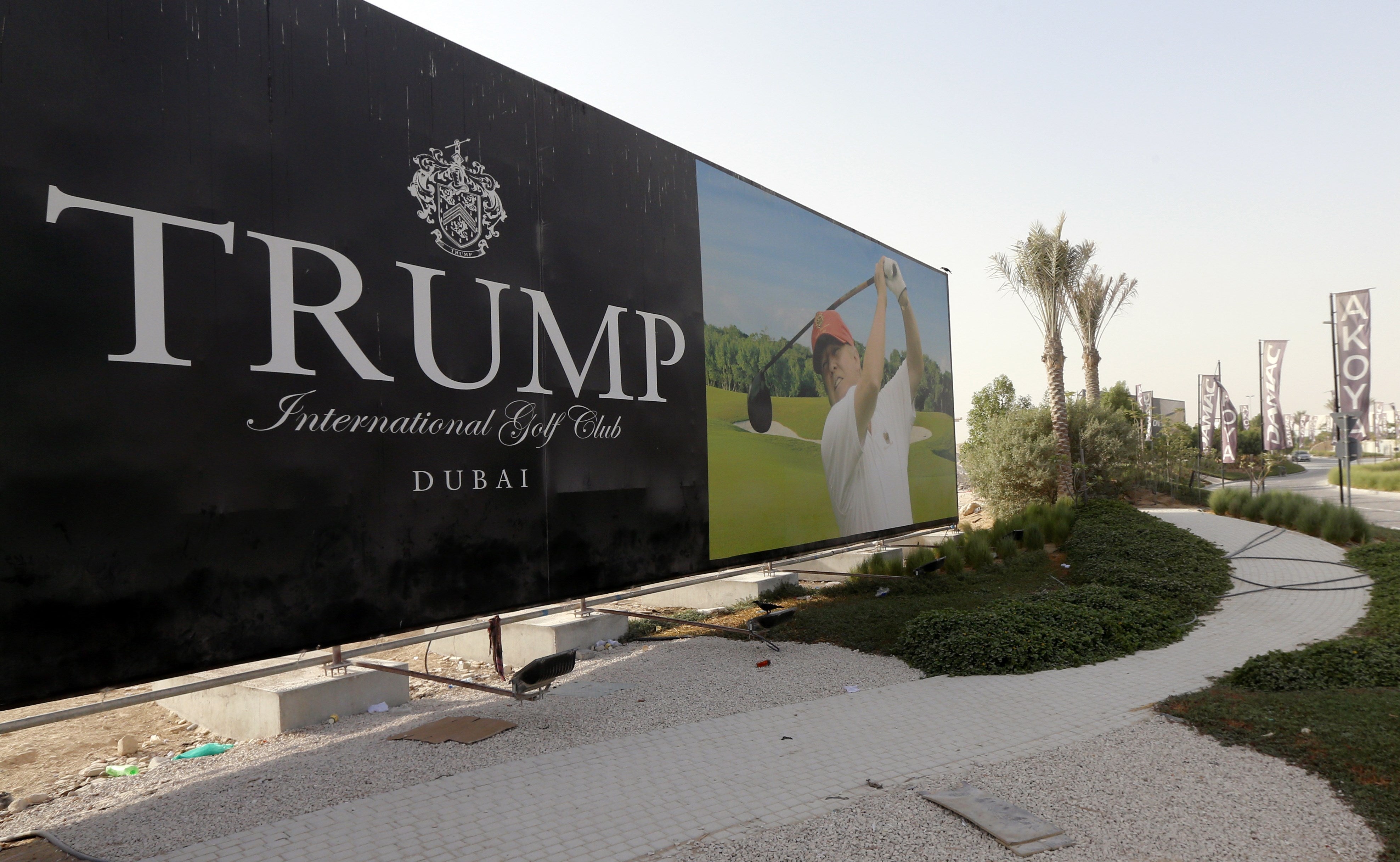 DUBAI—The day after the executive order commonly known as the Muslim Ban came down, I was at San Francisco International Airport, on my way to the Middle East. As I waited in the security line the terminal was suddenly flooded with hundreds of citizens who were protesting President Trump and the most recent of his controversial policies. They were waving signs, pounding drums and playing brass instruments, chanting and singing. It was quite the soundtrack as I went through the onerous security procedures that were put in place in the aftermath of 9/11. I was bound for the United Arab Emirates, which birthed two of the September 11th hijackers, and from where some of their financial support originated.

The U.A.E. is often painted as the Switzerland of the Middle East: a banking and commerce center defined by its neutrality. But this small, spectacularly wealthy country is not immune to the fanaticism that feeds terrorism and defines politics today. Marwan al-Shehhi is the Emirati who piloted United flight 175 into the South Tower at the World Trade Center. He came from a town outside of Dubai, and years after 9/11 the Daily Mail reported, “Some locals regard his family’s white stone villa, which stands near the mosque in a dusty hamlet where goats roam the streets, as a shrine.”

On my first morning in Dubai I awakened to the adhan, the melodic call to prayer that was booming out of speakers on the mosque next door to my swank high-rise hotel. It’s a lovely sound, as evocative as the chanting had been at SFO. I had been looking forward to a break from the contentious political climate in my homeland but there was no escaping it, even half a world away. During my first breakfast in Dubai I perused the Gulf News. Its pages were aflame with stories about Trump. (Sample headlines: “Muslims now America’s untouchables”; “American President building a wall of ignorance”.) On A27, as part of a two-page spread devoted to the protests in the U.S., there was a picture of the demonstrators at SFO. I was particularly interested in a small item buried on A10, which reported, “His Highness Shaikh Mohammad Bin Zayed Al Nahyan, Abu Dhabi Crown Prince and Deputy Supreme Commander of the UAE Armed Forces, received on Sunday night a telephone call from U.S. President Donald Trump, during which they explored ways of enhancing bilateral ties of friendship and cooperation.”

Despite the UAE’s strong ties to 9/11, it is not one of the seven countries on the Muslim Ban list. The President has already been the beneficiary of Emirati friendship and cooperation, as he is front and center on two big-money Dubai golf courses that are at the heart of mega-developments created by his friend Hussain Sajwani. A Shiite Muslim in a Sunni country, Sajwani has always been a controversial figure in the U.A.E. He owned a large-scale catering business that fed the U.S. military during both Gulf wars as well as conflicts in Bosnia, Somalia and Afghanistan. He transitioned from a wartime opportunist into a real-estate mogul through his company Damac Properties, which is building thousands of housing units around both of the Trump golf courses in Dubai. Sajwani attended the president-elect New Year’s Eve party at Mar-a-Lago, and headlines were made when Trump hailed him from the stage, saying, “Hussain and the whole family, the most beautiful people, are here from Dubai tonight.”

Yet politics can complicate any relationship. During the presidential campaign, as Trump was ratcheting up his controversial rhetoric about Muslims, the five large gold letters spelling the President’s name were temporarily removed from the entrance to Trump International Golf Club Dubai. It was a powerful symbolic gesture.

This week I journeyed to Trump’s Dubai property to get a look at the place for myself. Talk about globalism: My Ethiopian cab driver spent the entire drive bumping American hip-hop. The course is 20 minutes from downtown, past endless construction sites. I started counting cranes but became bored and gave up after I got to 30. Many of these luxury homes are snapped up by Saudi and Iranian buyers, offering a safe place to park their money outside of their politically volatile home countries. (Iran is one of the seven nations named on the Muslim Ban, but Saudi Arabia, which supplied 15 of the 9/11 hijackers and is the country in which Osama bin Laden was born and raised, is not.) Someday, sooner rather than later, the oil will run out across the Middle East. What will become of all these oversized houses? Will the desert reclaim them? That’s a reckoning for another day.

The lettering announcing the Trump International Golf Club Dubai has been restored, in all of its gaudy glory. Next to the striking, modern clubhouse a giant stage was being built for the grand opening gala in a couple of weeks. Some 2,000 guests are expected, including both of the President’s sons.

Regardless of the man’s rhetoric and policies, the Trump name remains powerful. The club has already sold 60 memberships, exceeding the goal for the first full year. I spent an hour poking around the shiny real-estate sales center, during which a steady stream of Mercedes and Bentleys pulled up, carrying men and women in traditional attire. On the agreement that I wouldn’t use his or her name or any identifying detail, one employee agreed to speak to me. “All day long there is talk about Trump and what his intentions are,” the person said. “There is fear, for sure. We all wonder what his next order will be. But Dubai is a place obsessed with wealth and status. The Trump name has always been about wealth. Now he is President of the United States—nothing has greater status than that. Whatever their personal feelings may be about him, the buyers here don’t want to miss out on the opportunity to align themselves with the Trump brand.”

The excellent golf course has houses and apartment buildings along every hole, many of them still being built by workers toiling under a merciless sun. I was playing golf with a young assistant pro on a mostly empty course; the workers always stopped to watch us, and I couldn’t help but wonder what they were thinking about such leisure. “Dubai wouldn’t be Dubai without those guys,” my playing partner said. Like America, Dubai has been built by immigrants. Here they are imported from India, Pakistan, Burma, the Philippines and other poor countries, with the promise of a better life. An estimated 5 million foreign laborers live in the U.A.E., roughly equal to the number of residents. Last spring, a Vice investigation on HBO revealed the squalid conditions at the work camps where the Trump Dubai builders were being housed. The workers said they had been enticed to come to Dubai with the promise of work at 10 dirham an hour ($2.70) but that they were being paid only half of that. In a statement to Vice, the Trump Organization pointed out that it has only a licensing deal with Damac and no oversight on the conditions at the camps. Damac also denied culpability, telling Vice that the company “does not directly employ labor on its developments” but instead “contracts with third-party construction companies.”

Even for Tiger Woods, being linked with the President is complicated. Five minutes from Trump Dubai another massive development is being carved out of raw desert. Trump World Golf Club Dubai is slated to open in 2018, and Woods is designing the course. “My father and Tiger have been friends for a long time,” Eric Trump said in an exclusive interview with Golf.com’s Pete Madden. “They’ve been very, very close. When you combine Trump and Tiger, it’s a match made in heaven. It’s a very amazing combination.”

As the President told GOLF’s Joe Passov in 2014, “Hussain (Sajwani), my good friend and chairman of Damac, acquired this huge piece of land. He’s one of the world’s great developers and he wanted this project to exceed every expectation. When we discussed the golf course architect, we agreed that there was only one choice: Tiger Woods.”

Yet the Woods camp has quietly tried to distance Tiger from Trump. Spokesman Glenn Greenspan bristled at talk of an alliance. “Tiger is not in partnership with Mr. Trump or his organization and stating otherwise is absolutely wrong,” Greenspan said. “Tiger Woods Design’s contract and obligation is to the developer, Damac Properties. Our association ends there. I can’t put it any clearer that Tiger Woods Design does not have an agreement with Mr. Trump.”

On Thursday, after playing the first round of the Dubai Desert Classic, Woods made a site visit to Trump World. Three holes have been shaped, and Tiger was “pleased with the progress,” according to his agent, Mark Steinberg. “It looked good, it looked cool.” How much discussion has Woods had with Trump about the project? “Very little,” said Steinberg.

This is the new reality at the complicated nexus of golf, Trump and politics: The President is both an invaluable asset and the source of widespread controversy. Things will continue to be messy as long as golf is a major export of the President of the United States. The Trump Organization is currently pursuing a project built around an Ernie Els-designed course in Indonesia, which has the largest Muslim population in the world and has become a base of operations for Islamic State cells. Ban or no ban, Trump’s golf business rolls on.