Every week GOLF senior writer Michael Bamberger identifies — and ranks — the absolute, undeniably, very best* things in golf right now. This week, he says goodbye to the Florida Swing and hello to David Leadbetter. (*or at least mildly interesting)

We doff our cap to Sung Kang and Jason Kokrak. These two fine athletes were the only two golfers to play all 288 holes of the four consecutive Florida Swing events: Honda, Bay Hill, Players, Valspar. But there can be only one Low Florida Swinger, and now the tabulations are in and we can offer our hearty congratulations to Jason, the long-hitting 33-year-old Canadian-born American golfer who is clearly coming into his prime. Jason, you are the 2019 Low Florida Swinger, the hot new four-week competition sponsored by GOLF.com and powered by the PGA Tour.

Legal requires this next part: to participate, contestants must be at least 18 years of age and have played all 288 holes of the four Florida Swing events: Honda, Bay Hill, Players, Valspar.

Kang and Kokrak, who sit side-by-side in various locker rooms, were the only players to do that. Which gets us to their 72-hole scores from the four events in playing order, followed by their grand totals:

Both played well all through the month-long stretch, but in Week IV Kokrak had a T2 finish, ending the week a shot behind the winner, Paul Casey. With the pressure on, he rose to the occasion!

Jason, well done, sir. You can expect a representative of GOLF Magazine/GOLF.com to fete you with various emblems of your Sunshine State successes at an upcoming tournament. The Masters, ideally. 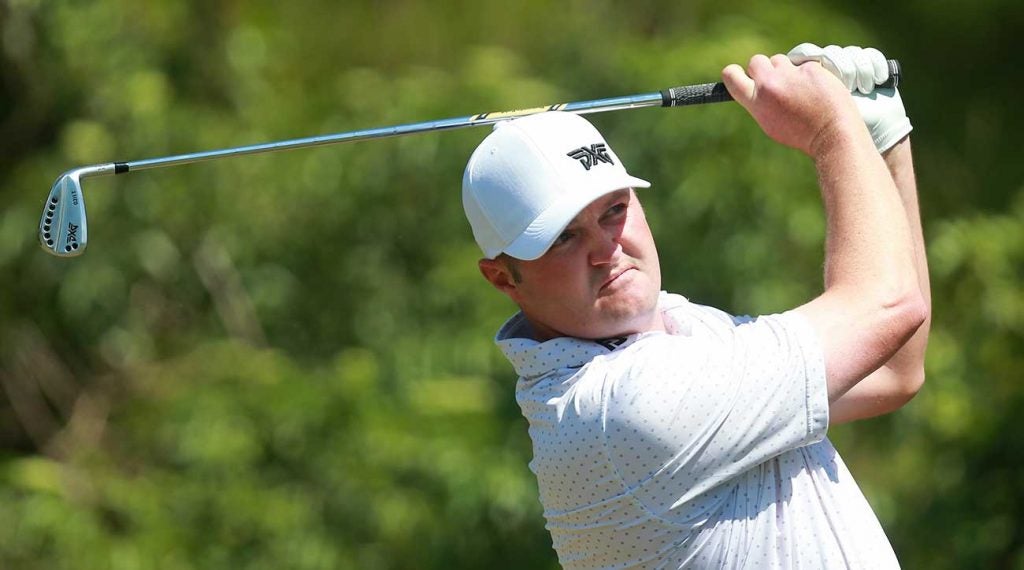 The 2019 Low Florida Swinger, Jason Kokrak. (And no, this is not a real award.)
Getty Images

Rory McIlory is married, approaching 30, and one win away from completing the career grand slam. (Here comes Augusta.) He is also becoming an important voice in the game. A couple weeks ago, McIlroy spoke in defense of the USGA, which has become golf’s punching bag when what it really needs is help and support. This week at the Match Play in Austin, he spoke about unruly fans. For most of the past 100 years, American golf has had identifiable figures, from Bob Jones to Mickey Wright and Jack Nicklaus and Tom Watson, who always sought to put golf first, in terms of how they played the game and talked about it. That’s been missing for about 20 years now. That kind of voice, from on high, is one of the things that made golf different from other sports. Rory seems to be coming into his own.

There is a variety of ways to measure match-play excellence on the PGA Tour, and the best way is to look at 72-hole hole PGA Tour events that end in a two-man tie. These become, essentially, match-play events, as they are settled in sudden death. With that in mind, here, again, is another look at Tiger’s dominance:

In 1996 Las Vegas, he beat Davis Love on the first playoff hole;

In 1997, at the Mercedes Championship, he beat Tom Lehman on the first hole;

In 1998, at Riviera, he lost to Billy Mayfair on the first playoff hole;

In 1999, at a WGC at Valderrama, he beat Miguel Angel Jimenez on the first playoff hole;

In 2001, at Firestone, he defeated Jim Furyk in a seven-hole sudden-death playoff.

In 2002, at the Tour event in Boston, he beat Colin Montgomerie on the third hole;

In 2005, at the Masters, he beat Chris DiMarco on the first hole;

Later in 2005, at a WGC event at Harding Park, he beat John Daly on the second playoff hole;

In 2007, again at Firestone, he beat Stewart Cink on the fourth hole.

That’s 8-1, right there. His playoff win over Rocco Mediate at the 2008 U.S. Open was ultimately another sudden-death playoff win, after they tied in stroke-play after 18 Monday holes. His 2000 win over Bob May at the PGA Championship was a four-hole aggregate, so you can leave that off. His playoff win at Torrey Pines in 2006 was over two golfers, so that’s even harder.

He had something and a better golf skill was only part of it.

One of the great shopping pleasures for the past decade or so has been to inspect the fine selection of golf duds at your nearby Jos. A. Bank retail store. Just looking at the familiar JAB/DL logo, featuring the noted golf instructor in profile in his trademark plantation hat and oversized sunglasses, made you feel you on the practice range, grooving your move. So you can imagine the shock when this reporter/fashion maven was told by a store manager that the Leadbetter line was being discontinued. Suddenly, you feared that this once wildly prominent instructor, now 66 years old, might be starting to fade away from the global golf stage. And then came the news: defending Masters champion Patrick Reed, struggling of late, is now working with the Englishman who helped make Nick Faldo a three-time winner at Augusta. (In other fashion news, at a Florida tournament, a fellow scribe said to your correspondent, “I like your shirt – what’s it made of?” “Cotton,” came the reply.) 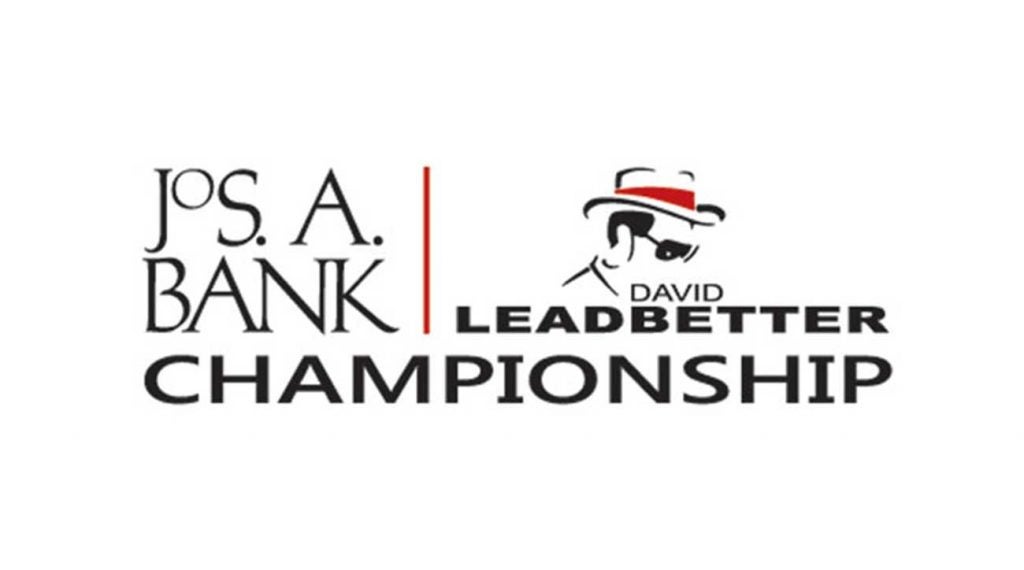 Kid Rock is to country music what Dustin Johnson is to professional golf: a natural talent who can do it all, and a gift for making it look easy. It is no surprise that President Trump enjoys playing golf with both of them at courses that bear his name. Last weekend, at Trump International at West Palm Beach, Kid Rock would have seen Trump’s name on Trump’s locker, listing him as the 2018 club champion. Earlier this year, another clubhouse plaque reportedly listed two golfers as co-champions for 2018, Trump and Ted Virtue, a New York financier, the original winner of the championship before a abbreviated challenge match. But last weekend, when Trump was entertaining Kid Rock, the plaque looked like this: 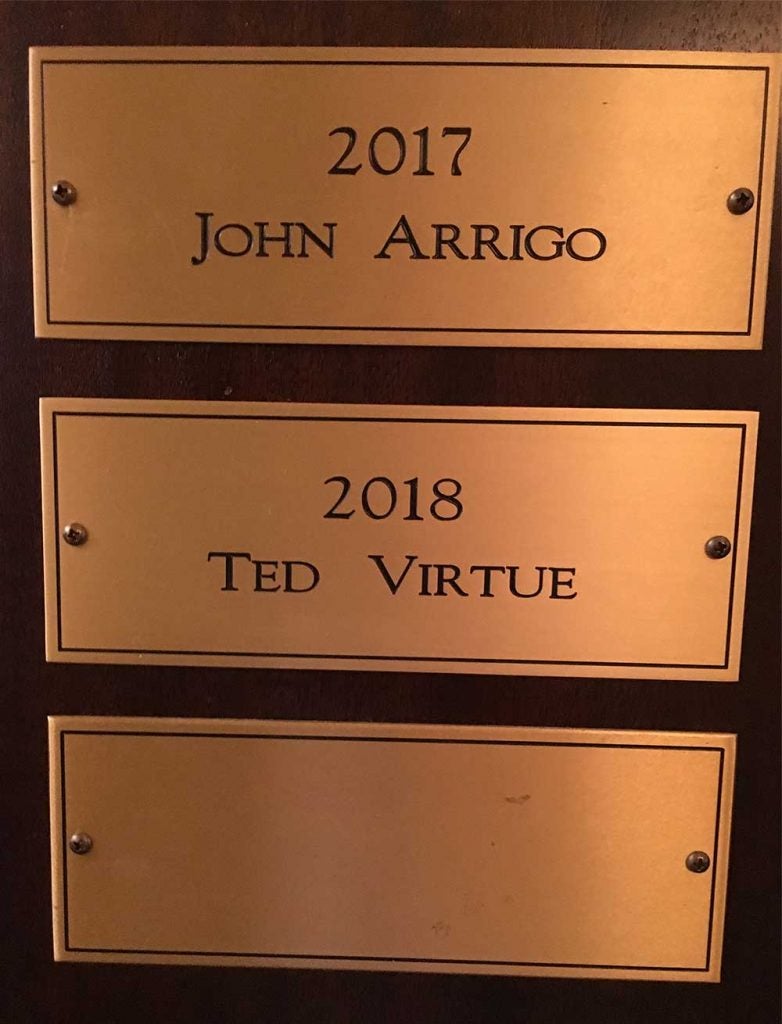 For those of you who are fans of the spectacular old links at Machrihanish, in western Scotland, on the Mull of Kintyre, there is a new and beautiful book that covers the golf scene there, by way of painting, prose and poetry, from the 1880s to the 1920s. You might have to get to the club to find the book, I don’t know. It does not include a reference to the Paul McCartney folk number, “Mull of Kintyre.” The video of the song gives you a sense of what Old Tom Morris must have found there, way back when.

It is such a pleasurable thing, to see our English language used correctly. Bernhard Langer, for instance, upon being asked to identify the greatest golfer in the history of German golf: “It is I.” Here’s the Chez Reavie skinny from the PGATour.com’s preview of this year’s Match Play: “Debutant last year took down Jon Rahm but still couldn’t get out of his group.” What a fine and precise sentence.