Golf is on the verge of a rules crisis, and there’s plenty of blame to go around

PALM BEACH GARDENS, Fla. – Spring break! Some of the players can’t wait for Sunday night, to take off their polyester your-ad-here caps and let their foreheads breathe. But things were loose here before that. All week long, here at PGA National and on millions of screens across the world, there was an endless-loop showing of Golfers Gone Wild. That is, this ongoing 2019 rules debacle. In truth, this thing is edging toward a crisis. If not a crisis, then into a game that is different from the one we have known and loved. That game had a top-down order to it. Now it’s a free-for-all. Golf Channel and Twitter has empowered the Tour player as never before.

Golf needs a grownup who can step up and protect the game from its baser instincts. By far the best person for that role is Tiger Woods, even though he has contributed to the poor state of affairs. Still, tomorrow presents a new chance. What’s clear is that golf needs a leader, a person who will reliably and persuasively put the game ahead of himself or herself.

Rickie Fowler’s Three Stooges mock-drop on Thursday – from between his legs and without the aid of running water — he has to be better than that. It was beyond absurd. Awful. The USGA’s we-need-to-talk weekend tweet to Justin Thomas was nearly worse, if that’s possible. The false humor, the lack of dignity and gravitas, the we’re-hurt act. Blech. Awful II. But if you really want to start counting by number, the timeline of this rules debacle begins in Maui, at the first event of the year.

There is so much blame to go around right now that eight fingers (the normal complement) is not enough. A short list in no particular order: Woods, Fred Ridley and Augusta National; Dustin Johnson and Lexi Thompson; Mike Davis and the USGA; Jay Monahan and the PGA Tour; Justin Thomas; various card-carrying members of the GWAA, including your correspondent; some of your favorite Golf Channel commentators. 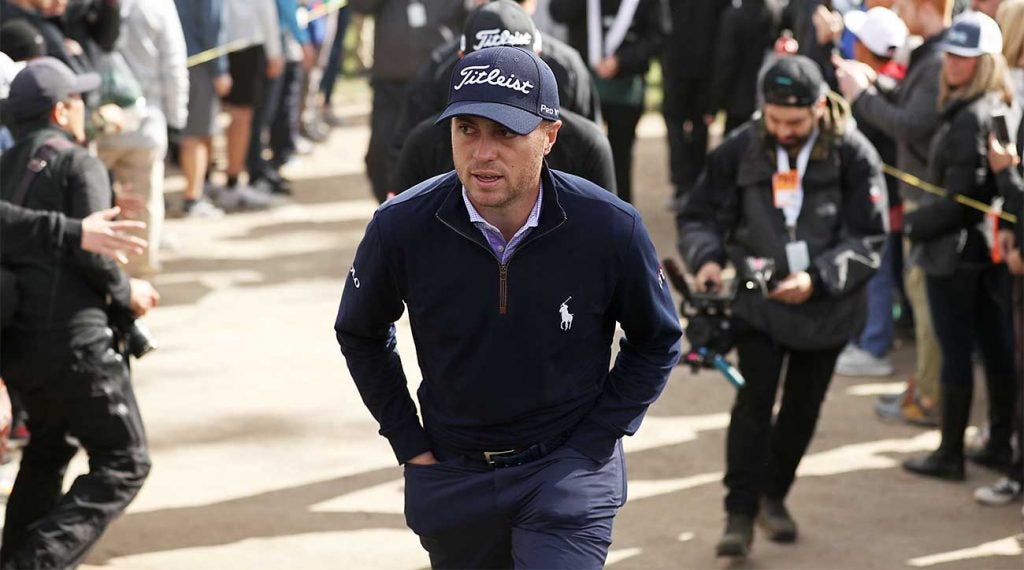 Justin Thomas called out the USGA on Saturday, but the USGA didn't stay silent.
Getty Images

To get on this list all you need to do is fail to convince the public of the underpinning that makes all serious competitive golf possible:

Golf’s rulebook, and strict, self-policed adherence to it (with help as needed), is the necessary starting point to all serious golf competitions.

That means you, the serious golfer, have to know, understand and respect the rules and those who make them.

Does that mean you abdicate your right to challenge the rules, or any rule? To question their logic and application? Of course not. But it’s how you do it, and when you do it.

Here’s a message to anybody with his or her name on a golf bag: Just learn the new rule and abide by it.

Just ask yourself, before you open your mouth or Twitter account: Are you about to make the game better? Are you putting the game first, or yourself? Fowler failed on Thursday. The USGA failed on Saturday. It was all so inane it makes you want to scream.

There’s been a great deal of attention to a new rule this year about how to drop. There was a year-long review period before the new procedure, and the other rules changes, became golf law. Here’s a message to anybody with his or her name on a golf bag: Just learn the new rule and abide by it.

Does the new drop look ridiculous? It does now, because it’s new. A decade from now it won’t. Was this a rule that really needed to be changed, from the old shoulder-height drop? Probably not, but the USGA and the R&A had sound reasons for making the change, and also a long review period where you or I or Rickie Fowler could have tried to convince them not to make it. So we failed.

By the way, nobody playing real-life golf is going to care about how a drop is made en-route to shooting a newspaper 93. There is and always has been two games, the elite game and the actual game, and the chasm between the two is only increasing. You wonder if the good folks in Liberty Corner, N.J., actually get that. The search for a lost ball continues until the group behind has caught up or your anger has faded, whichever comes first. Then we drop the ball roughly where it was lost and add one shot.

A real rules debacle is coming, courtesy of the new three-minute search rule. Nobody is ready for that. It may not come up at the Players or the Masters, but it almost surely will at Bethpage (PGA Championship) and Pebble Beach (U.S. Open) and Portrush (British Open). In other words, courses with rough.

Once golf had Joe Dey and Sandy Tatum (obscure names today) and Bobby Jones. They were giants of the USGA and their golfing values could be found all through the game. You can see their examples in the life and times of Byron Nelson and Ben Hogan, Arnold Palmer and Jack Nicklaus, Mickey Wright and Nancy Lopez. Tom Watson, Curtis Strange, Davis Love — and thousands of others who could honestly say they put the game ahead of themselves. Can you imagine Karrie Webb ever playing hockey on a U.S. Open green as Phil Mickelson did last year? Mickelson, in time, owned that moment of passing craziness. Yes, his action demeaned the game. But, tellingly, it had no impact on him.

Speaking of hockey: the late Dave Anderson of the New York Times used to say that the generations of NHLers who came after Gretzky — Mario Lemieux and Sidney Crosby and the rest — maintained a standard of grace, on the ice and off it even more – because they wanted to follow in Gretzky’s example. Had The Great One acted as an ass, that would have opened the doors.

Who is golf’s Gretzky? In golf who is setting that example now? Jack Nicklaus spent his long and great career doing almost everything the right way. (Well, his pace was glacial.) But at age 79 he doesn’t want to be the game’s high priest, particularly since golf never listened to him about what a crazy-long golf ball would do to courses, and the expense and time it takes to play.

In the meantime, golf’s search for its Judge Landis (baseball’s first and iron-fisted commissioner) continues. Twitter provides a voice to the voiceless, and that’s an incredibly valuable thing. But you’ll never find a Landis who can offer a decision, or set a course, in 280 characters, no matter how many times you hit the return key and drop in three dots.

Here’s golf in two words: own it. Own it! Own your mistakes and your successes. Own your swing, your practice routine, your scorecard. Golf is supposed to be about taking responsibility. Leave the course better than you found it.

Woods, at the 2013 Masters, when he made that bad drop on 15, did not own that moment. Woods made an innocent mistake, but it was a mistake nonetheless. He could have done so much for the game right then and there by saying I am responsible for this mess and I will clean it up. All he had to do was withdraw. Woods felt he was entitled to keep playing because his error paved the way for another one.

You might remember it. Fred Ridley, then a Masters tournament official and now the club’s chairman, should have asked Woods about the drop after the round and before he signed his card. Ridley had a moment where he could have stepped in and taken over, been the adult in the room, but he didn’t and the residual effects are in evidence. Ever since, the us-against-them mentality has escalated.

Dustin Johnson, at the 2016 U.S. Open at Oakmont, could have said that he could not be 100 percent sure he did not cause that ball to move. He could have owned that moment and bent over backwards to be fair to others. He didn’t. That ball moved and Johnson said he was not responsible for it.

Likewise, Mike Davis and various USGA officials could have said to Johnson, We take you at your word and you should play on, without penalty. In other words, be decisive and say the matter is over. They could have owned that moment, too. They didn’t.

(How the public has lost faith in the USGA, by taking on anchored putting and going overboard on its U.S. Open course set-ups, is another discussion.)

Jay Monahan and the PVB Gang could be doing way more to help the players to see that it’s in their interest to lodge their complaints with a decorum that has always separated golf from every other sport. Various commentators, on cable and network TV, at websites and in magazines, could have and should do the same.

Lexi Thompson did not own her poor ball-marking at the 2017 ANA Inspiration. She was not a victim there. All she did was mark incorrectly. She showed not the slightest inclination to own that moment.

Here’s a bright spot. Adam Schenk, 27-year-old professional golfer, got a two-shot penalty on Saturday morning for breaking a rule, by mistake, on 17 in his Friday round. His caddie was directly behind him as he played his bunker shot. Schenk violated Rule 10.2b(4): “The player’s caddie must not deliberately stand in a location on or close to an extension of the line of play behind the ball for any reason.” It was of course not an intentional act of cheating. But that’s not how the rules of golf work.

“The rule changes are what they are,” Schenk said. “They’re fine. Everybody has got to play by them, and I just unfortunately didn’t.”

Kid got it exactly correct. What an example.