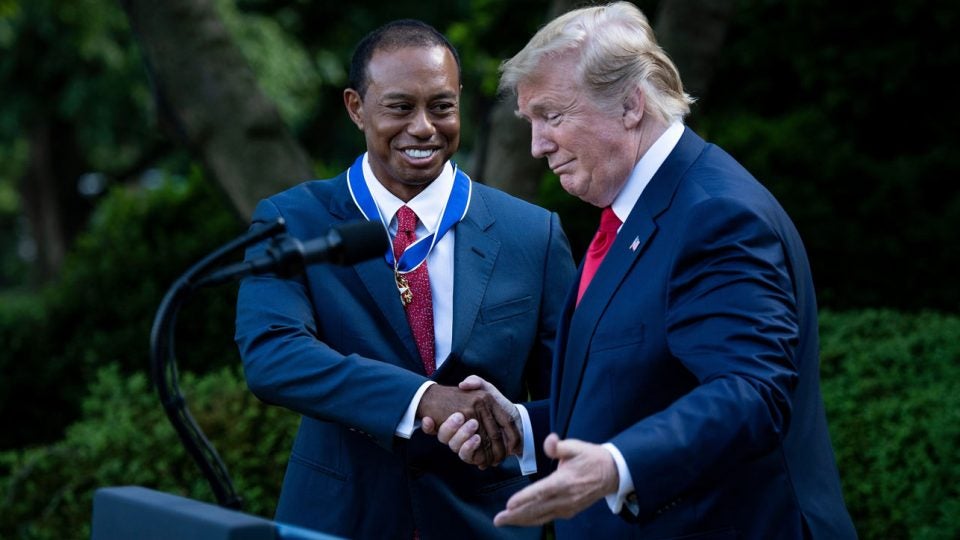 Donald Trump shakes hands with Tiger Woods after awarding him with the Presidential Medal of Freedom.
Getty Images

“We have become aware of reports in the media questioning recent scores posted on President Trump’s GHIN account,” said Craig Annis, USGA managing director of communications, told Golfweek. “As we dug into the data it appears someone has erroneously posted a number of scores on behalf of the GHIN user.”

The four unflattering erroneous scores, rounds of 101, 100, 108, and 102, have been removed. Interestingly, the 68 from a round on April 19 that was posted to Trump’s GHIN page this past Wednesday and referenced below has also disappeared from the page.

Everyone knows that President Donald Trump plays a lot of golf. But you wouldn’t know it by looking at his official USGA Golf Handicap Index, where he apparently just posted his first score of the year. And it was a shockingly low one.

On May 15, this past Wednesday, a 68 appeared among Trump’s scores on his handicap page on the GHIN handicap tracking system, for a round played in April. Sportswriter Leif Skodnick posted an image on Twitter showing the score on Trump’s GHIN page:

BREAKING: President Trump has posted an 18-hole golf score to @USGA Golf Handicap Information Network for first time this season – a 68(!) on a course with a 75.3 rating/139 slope. pic.twitter.com/yiHKdhIWU9

On Friday morning, GOLF.com emailed Eric Trump, who runs his father’s golf operations, to confirm that the president posted the score. As of this writing, Eric Trump had not responded. A subsequent report from Golfweek claims that President Trump’s GHIN account had been hacked.

“We have become aware of reports in the media questioning recent scores posted on President Trump’s GHIN account. As we dug into the data it appears someone has erroneously posted a number of scores on behalf of the GHIN user,” said a statement to Golfweek from Craig Annis, the managing director of communications for the USGA. 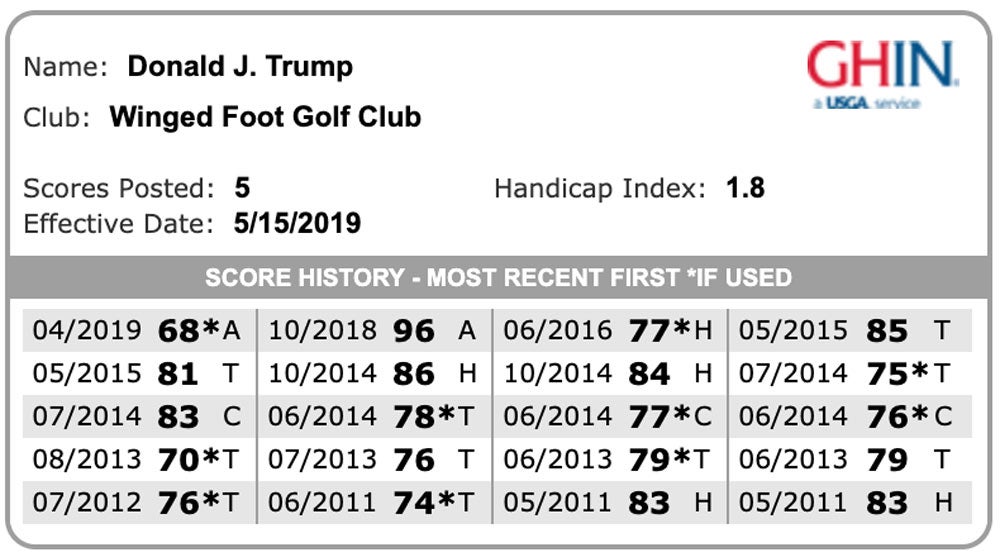 Even stranger is what Trump shot in the other presidential round he reported, in October of last year: 96. That’s an incredible 28 shots more than the score he posted in April. The exact dates of the rounds and the courses on which he played are not publicly available.

We do know that Trump played a round on March 9, 2019. He teed it up with LPGA star Lexi Thompson that day at Trump International Golf Club in West Palm Beach while Trump was spending time at his Mar-a-Lago resort.

The president also played alongside Tiger Woods and Jack Nicklaus on Feb. 2 at Trump National GC, Jupiter. He later tweeted a photo of the trio during the round.

As far as the 96 he reported last year goes, we know that at some point in 2018 Trump faced off in a one-on-one match against the club champion of Trump’s West Palm club. Trump won, and in a bizarre twist the two were named co-club champions.

Whatever the circumstances, a score of 68 is exceptional on any course, especially when it comes on the heels of 96. The score dropped Trump’s handicap index to an 1.8, which is just short of the 1.4 max required to enter a U.S. Open qualifier.