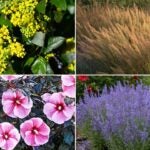 “We all must cultivate our own garden,” Voltaire insisted.

Yeah, well, easy for him to say.

For most of us with busy schedules — and without green thumbs — maintaining a nice landscape is a long ask.

As a landscape architect with Pinnacle Design Company, a La Quinta, Calif-based operation that specializes in golf courses, resorts and residential communities, Fisher has cultivated gardens all around the country, and overseas.

On behalf of those us who lack the time and know-how to do the same, we asked him to point us toward good-looking plants that thrive in different regions with relatively little upkeep.

(Note: A number of the plants described below do well in many parts of the country, not only in the regions under which they’re listed).

You’ll need to cut it down in winter to about 12 inches, Fisher says. But aside from that once-a-year task, tending this wispy, reddish-brown beauty is like being a bald man’s barber. There really isn’t a lot to do.

This shade-tolerant plant comes in dozens of varietals, some of which produce pretty summertime blooms. But hostas are better known for their large, lush leaves, which provide beautiful cover, making them ideal, Fisher says, “if you’re looking for a leafy mass of green.”

A Russian sage is not a wise man in a white robe in the Ural Mountains. It’s a fragrant plant that pops with purple flowers from spring through fall. Dry conditions are what it likes best.

A simple, green and massy plant, lilyturf is popular with people who want a verdant ground cover but don’t want a lawn.

If you’ve played much golf in Florida or Georgia, you’ve probably knocked a ball into one of these. Short-trunked palms, they’re grow in abundance under the shade of pine trees, and pretty much everything about them is easy — unless you’re looking for a Titleist in their leaves.

There are all kinds of aloe. True to its name, this variety has pretty blue-gray leaves. It also has a propensity for spreading, a good trait if you’re looking to cover a good amount of ground.

Asking very little (especially in the way of water) but giving plenty in return, this evergreen shrub produces bright, red blooms, a colorful touch that makes for a nice contrast in desert landscapes, where, Fisher says, yellow flowers are more commonplace.

Not to be confused with the rosemary, the herb, this drought and salt-tolerant plant is often used for stabilizing slopes. It also makes a nice addition to rock gardens begging for color.

California residents always seem to be from somewhere else. Not toyon. It’s a Golden State native, found growing everywhere from shrubby chaparral to evergreen forests.  Some people think the red berries it produces are messy. But they’re hardly a bother, Fisher says, requiring little more than a quick sweeping when they drop, usually around the fall.

With apologies to pinot noir, Mahonia is the original “Oregon grape.” That’s the common name of this Northwest native, which produces a yellow flower and loves living in the shade.

Also known as a stonecrops, these low-growing plants do well with minimal water and provide “great texture under trees.”

The secret to making perfect barbecue sauce, according to a golf-club chef