Xander Schauffele’s advice on slow golfers: ‘Being transparent is key’ 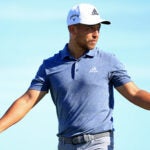 We'd imagine Xander Schauffele's reaction to a slow playing partner would look something like this.

When you get a few minutes with Xander Schauffele, it’s worth getting straight to the good stuff.

“I thought these were golf questions. I’m not here to be Dr. Phil,” Schauffele said with a grin after a few minutes of deep inquiry.

We, in this case, meant myself and my Drop Zone podcast co-host Sean Zak. And deep inquiry meant that we’d decided Schauffele would be the perfect guest to help debut our newest segment, “Golf Advice.” We’d solicited a few brain-busting questions from buddies of varying handicaps about social dynamics in their golfing lives. Schauffele gamely answered in the direct sort of way that only he could. Not Dr. Phil, perhaps. Dear Abby? That’s more like it.

And our final question came from a scratch handicap and read as follows:

“There’s this nice-enough guy at my club and he always asks me to play. But he’s a slow player, not a super-fun hang. I’m around the club quite a bit and he’s around the club a lot, so we cross paths a lot, but I’m running out of excuses to avoid playing with him. Do I need to reassess my schedule? Leave the club when he’s there? Or should I be more open to playing with him?”

Here’s what Schauffele suggested (with a grin, I should note):

“Personally, I try to be as nice and polite as possible, but a long time ago I learned that just being very transparent is key, so if someone thinks I’m being kind of an a-hole, I like to think that’s their problem, so I would inform this guy saying hey, I don’t know you, I think you’re a very nice man. I like to play fast and I think you play very slow, so this relationship’s not going to work out.”

I immediately put that to the test. What would he say if Sean and I asked to play? To his credit, Schauffele kept things blunt.

“Hey, guys, you aren’t very good and I don’t know what you do for me, so if we can find a way to have some back-and-forth then maybe we can get a round of golf together, but for the most part I just see you guys taking up my time; I don’t really feel the give and go here.”

It was definitely transparent. You can watch the entire video segment below or on YouTube — and you can listen o this week’s episode of the Drop Zone (including Schauffele’s interview) on Spotify, Apple Podcasts or anywhere you get your podcasts.