This was our most read etiquette tip in 2020 at GOLF.com 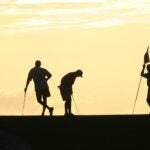 This was our most-read etiquette tip in 2020.

There are so many different little things about golf, it’s no wonder it’s intimidating for newcomers to get involved in the game. But nevertheless 2020, despite all its obvious troubles off the golf course, was a year of unparalleled growth for the sport. Newcomers flooded into the game as they sought to get outside and away from it all, and, when they did, they came to GOLF.com to learn on all areas of their new favorite hobby.

The “etiquette” of playing golf was one of those areas that readers flocked-to, none more so than our most-read etiquette tip in 2020: How golfers should act when golfers in the group behind hit into them. Most golfers have been in both situations: Being the golfer hit into, and (hopefully accidentally) hitting into the group ahead of them. In his article, our writer Josh Sens concerns himself with how the victims of such an act should behave.

In all cases, he recommends politeness. It may sound cowardly, he admits, but there’s a good reason for it. Stooping to one’s level won’t solve anything, may put you in danger, and worse yet, may ensure you won’t get an invitation back to whatever nice course you may be playing. Besides, the golfer hitting into you may have done it by mistake. If it’s a second offense, stay calm and send a passive-aggressive message by teeing up their golf ball, Josh says.

Here’s a selection from the article, which you can read in full right here

One innocent misfire? That can be forgiven. But not if the problem rears its head again. What to do? Internet chat rooms devoted to this topic offer a wide assortment of suggestions, (thwack the ball into the woods, write an expletive on it, relieve yourself on it) that range from the juvenile to the sociopathic. The Etiquettist does not recommend them. An angry or emphatic wave could work to get your point across. Or a march back down the fairway for a conversation. Just be mindful: the guy waiting there with a golf club in his hands might be one of those online sociopaths, so adjust your words and tone accordingly. If the shot that nearly hit you was a blind drive or approach and the group behind you can’t see your reaction, you can still send them a message. One common practice is to stomp the ball into the turf, a blunt-edged response without much personality. Better to take the more playfully aggressive tactic of teeing up the ball where it came to rest. The Etiquetteist recognizes that the more combative of you might see this as wimpy and less productive than a physical confrontation. The Etiquetteist encourages you to grow up.

So take the advice to heart, golfers, and remember: Stay calm.