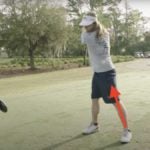 This swing hack can give anyone—even Phil Mickelson—more speed.

Phil Mickelson has made it a priority in recent years to gain speed — or hit “bombs,” as he puts it. One of the ways he set about doing that was using his lower body more effectively.

“When I did biomechanics study of my swing, my legs were inactive. I had great hand power, great arm speed, but my legs were nothing,” Mickelson says.

Implementing more jump and rotation in his legs and hips is something he’s talked about before, and he continues to work on it. That’s what prompted this interesting discussion with reigning World Long Drive Champ Kyle Berkshire, in this insightful Callaway Golf Instruction video.

“How do you hit such hellacious seeds?” Phil asks.

Berkshire responded with a rather interesting swing hack.

Berkshire was only 190 pounds when he won the World Long Drive Championships, so he needed to use all of his weight to maximum effect. He did this by creating a rocking motion at setup, which helped use momentum to get all his weight behind the ball. Some changes in his physique means he doesn’t need to use that exact move anymore, so instead he’s come up with a different one.

First, he pushes down into the ground with his lead leg, bending the knee as a result.

Then, he pushes back off it by straightening his lead leg and immediately starts his swing.

It’s a subtle move but an important one. That little push off his lead leg helps propel all his weight behind the ball as he makes his backswing turn, allowing him to generate maximum power and hit those “hellacious seeds” Mickelson was asking him about.

Watch the full video below for more:

This is the fatal flaw in Tom Brady's golf swing

Luke Kerr-Dineen is an English-American who oversees instruction and other service content across all of GOLF’s multimedia platforms. An alumni of the International Junior Golf Academy and the University of South Carolina–Beaufort golf team, where he helped them to No. 1 in the national NAIA rankings, Luke moved to New York in 2012 to pursue his Masters degree in Journalism and Media from Columbia University. Following graduation, he spent two years as a digital editor at Golf Digest before spending three years at USA Today.