Pro stung by rarely called penalty — for standing on a green 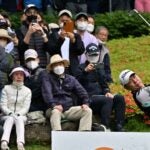 Mingyu Cho hits a shot on Sunday during the final round of the Asian Tour’s GS Caltex Maekyung Open.

“Cho’s chances,” the story on the Asian Tour’s website read, “were then shot to pieces.”

Two things are true here. The Asian Tour website gets right to the point. And Mingyu Cho’s chances, through a rarely called penalty, were, yes, shot to pieces.

The sequence in question came during Sunday’s final round of the GS Caltex Maekyung Open. There, according to the Asian Tour story, Cho played his third shot on the 9th at Namseoul Country Club in Korea while standing on the hole’s second green. (Second greens are more prevalent in Asia.)

Since you know the “shot to pieces” part, you can probably guess this wasn’t good. And you are right. Here’s why. According to Rule 13.1f, “relief must be taken from wrong green.” Here’s its complete description:

“Interference under this Rule exists when your ball is on a wrong green or a wrong green physically interferes with your area of intended stance or area of intended swing. When there is interference by a wrong green, you must not play the ball as it lies. Instead, you must take free relief by dropping the original ball or another ball in the relief area as shown in Diagram 13.1f. There is no relief under this Rule if interference exists only because you choose a club, type of stance or swing or direction of play that is clearly unreasonable under the circumstances.”

By not taking the drop, Cho was hit with a two-shot penalty, and he finished, unfortunately for him, two strokes behind eventual winner Bio Kim. Notably, before 2019, wrong green interference was called only when the ball itself was on the wrong green.

Has the penalty been called before in the professional ranks? On a brief GOLF.com search on Monday, the last known instance appears to have come during the second round of the 2017 Barclays, when Seung-Yul Noh played a shot on the 11th hole — from the 3rd green. (A video of the sequence is below.)

According to a story on the PGA Tour’s website, Noh said neither he nor his caddie were aware of the potential infraction.

“I’ve been out here 33 years,” said Slugger White, the then-Vice President of Rules and Competition for the Tour. “We have never seen this happen.”