The Etiquetteist: Am I allowed to deny an opponent’s press? 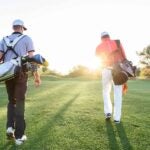 In a recent five-dollar Nassau against a buddy, I won the front side and was up three on the back side with two holes to play when my friend said he wanted to press. I declined. I’d been playing well all day and had built up a nice lead. Why should I risk losing my hard-earned profits with just a couple of holes left? That was my thinking, anyway. My opponent did not take kindly to my decision. He told me I was being unsporting and violating the ‘honor code.’ Who was right? Are you ever really obligated to accept a press

To borrow a term from hard-core gamblers such as yourself, the Etiquetteist is going to hedge. The answer is . . it depends. Not just on the stakes and the state of your match but also on your relationship with your opponent.

If it’s early in a friendly, low-stakes match, a press should be accepted, especially if you’re playing against an opponent who would do the same for you. Under such conditions, rejecting a second bet isn’t just poor form. It’s the kind of petty move that is apt to come back to bite you karmically, either in guilt-ridden dreams that night or, more likely, a snap-hook double-bogey on the next hole. From an ethical standpoint, to say nothing of self-interest, in those instances, with little money on the line and a solid friendship as a foundation, the Etiquetteist suggests that you just say ‘yes.’

That said, when circumstances change, the etiquette does, too. If it’s late in a big-money match against a cutthroat rival who would step on your neck at every opportunity, you are in no way obligated to accept a press. You might want to, in the hopes of administering an even bigger beating. But nothing in the unwritten rulebook requires you to put any of your winnings at risk.

The Etiquetteist has a friend — a swaggering, Clint Eastwood-wannabe type — who believes that all presses should always be accepted. No exceptions. In his macho view, anything else is ‘wimpy.’ But that’s caveman thinking, reflective of a guy who’s better suited to grunting in the dark than he is to arguing the finer points of etiquette.

You know what’s truly wimpy? Wimpy is getting your butt whooped all day, and then demanding that your opponent give you a late-round second chance and getting huffy when they don’t. They might, but they don’t have to. Wimpier still is waiting and waiting and then pressing late in a handicapped match where you’re getting strokes on the last few holes. That’s called seeking an edge and no one is required to grant it to you. The right to press anywhere, anytime is not a gift the golf gods hand out at birth.

And don’t even get the Etiquetteist started on the 18th tee double-or-nothing press, also known as the Aloha press, a last-ditch ploy to get even on the day. Once again, the person in the lead might choose to accept, but nothing obligates them to do so.

So, who was right — you or your buddy?

To resolve that question, the Etiquetteist would ask a few of his own: Was it truly a friendly match? Does $15 really mean that much to you? What would your opponent have done if he’d been standing in your spikes? Respond to those honestly, and you’ve got your answer.

It’s possible, of course, that a compromise would have been the best solution, a middle-ground agreement where you accepted a partial press, valued at some percentage of the original wager. But that requires discussion, and there’s nothing worse than mid-round negotiations.

Next time out, here’s your best bet: establish your terms clearly on the first tee.