This is the reason why arm-anchor putting is still legal 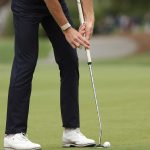 There's a growing movement to ban this style of putting. Will it last?

The year is 2013, and the game of golf is in the throes of an insurgent revolution.

Two years earlier Keegan Bradley had become the first player to win a major using a belly putter. The next year, Ernie Els and Webb Simpson became the second and third, winning the Open Championship and U.S, Open, respectively. Els had bested Adam Scott, who also used an anchored long putter, on that occasion. Eight months later Scott became the fourth anchored-putter major-winner. His win at the 2013 Masters came in the same event 14 year-old Guan Tianlang became the youngest player ever to make a cut at a major championship — also using an anchored putter.

That’s when golf’s governing bodies intervened. That year they announced, starting Jan. 1, 2016, that anchored putting would be outlawed.

Fast forward to 2021, and there’s a new form of anchoring beginning to take hold: so-called “arm-anchoring,” or “arm-lock” putting. Two belly putter refugees — Simpson and Bradley — both use the technique, as does Matt Kuchar, Bryson DeChambeau and Will Zalatoris, among others. Now, there are calls for this method to be banned, with some wondering how it even remained legal in the first place.

That’s why it’s worth revisiting the rule itself. When the USGA and R&A made their decision, they were insistent that this rule change was categorically not a ban on equipment. Rather, it was outlawing a very specific technique.

“Rule 14-1b focuses only on the method of stroke; it does not limit the conforming equipment that may be used,” the USGA wrote in its official literature on the change. It even went so far as to illustrate “permissible” ways to use belly and long putters under the new rules.

Ultimately, that’s why arm-anchoring made it through the new rule unscathed — the framework golf’s governing bodies used for the new rule focused on the technique involved with making a “stroke.”

Under rule 10.1, the USGA defines a stroke as: “Fairly striking at a ball with the head of a club. The fundamental challenge is to direct and control the movement of the entire club by freely swinging the club without anchoring it. … The player must fairly strike at the ball with the head of the club such that there is only momentary contact between the club and the ball and must not push, scrape or scoop the ball.”

Your ears may prick up at the word “anchoring” above, but the USGA makes it a specific point to clarify why arm-locking doesn’t fall under that definition: “If the player’s club, gripping hand or forearm merely touches his or her body or clothing during the stroke, without being held against the body, there is no breach of this Rule.”

Once again, it’s a technique that was being outlawed, not a piece of equipment, under the justification that using a club in one very specific way prevented golfers from making a free stroke. Outlawing arm-anchoring would require remaking the underlying logic for the rule in the first place, which may prove the arm-anchorers’ saving grace.