Rules Guy: Is it legal to avoid losing a ball by taking a penalty off the tee and heading straight to the drop zone? 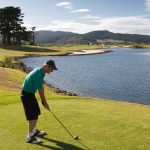 If you're facing a long carry over water, is it legal to head straight to the drop zone to avoid losing your ball?

Playing with my friend in a stroke-play event, he came to the 17th hole four shots ahead of the field but with only one ball left. Not knowing if the rules allowed for borrowing a ball from another player and facing a long par 3 over water, he asked whether he could bypass hitting his tee shot and head directly to the drop zone across the water, lying 3, to prevent the possibility of losing his last ball. He would still have a two-shot lead, with a much safer shot to the green. Legal? Creative thinking in any case, no?
—Dave Trent, Wilmington, N.C.

Creative, yes; legal, no. Think of the drop zone as an exclusive nightclub called, well, “The Drop Zone,” where you can’t just talk your way in — you must be on the guest list. (Yes, Rules Guy knows what a nightclub is, even if he prefers libraries.)

Under Rule 17.1b, access to the drop zone requires a ball to come to rest in the affiliated penalty area. The “1-ball rule,” Model Local Rule G-4, is rarely in effect other than for elite professional and amateur competitions. Assuming it wasn’t, your friend could indeed have borrowed a ball from another player if he ran out.

Due to marshy conditions at my club, an area was declared Ground Under Repair and a drop zone was established far behind it. Do I have the option to play my ball from the GUR, or must I use the drop zone?
—Mohammed Suleiman, via email

As a general rule, you can play from GUR — unless the committee has declared it a no-play zone. (Rules Guy, and Rules Guy alone, refers to this as an NPZ.)

This is sometimes done to protect flower beds, for example. A drop zone (DZ), it’s worth noting, is generally given simply as an option, in which case you’re also free to play from the nearest point of complete relief (NPCR), but the committee can require players to take relief from a drop zone. So, in summary: Check if the GUR is an NPZ. If so, check whether the DZ must be used; if not, you can also go the NPCR route if you prefer. FWIW. LOL.