Rules Guy: Are you allowed to stand on the cart path after taking relief from it? 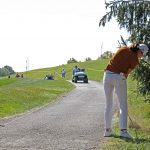 What do the Rules say about standing on a cart path after taking relief from it?

You take relief from a cart path. Your feet are still on the cart path, but you like the lie and choose to play the shot. Is that a penalty?
—Tim Booker, via email

For a cart path, under Rule 16.1(b) interference includes the lie of the ball, the area of stance and swing. Even if only one of those things creates the original interference, you have to take relief from all of them to create the required complete (!) relief.

If you’re trying to take relief but are still standing on the cart path, you’re playing from the wrong place, per Rule 14.7, and you get the general penalty of two strokes in stroke play and loss of hole in match play.

Near the green, there’s a golf cart turnaround landscaped with a bush in the center. A player in my group hit his shot into it, the ball suspended in the bush. He would have needed to stand on the cart path to try to play the shot, and he asked for free relief from the path. Not unreasonable, but there was no relief available on that side of the path — everything would have been in the planter. Also, it seemed highly unlikely he could extricate the ball playing from the bush, so I thought an unplayable with a 1-stroke penalty was the correct call, cart path or not. Do you agree? —Bob Smith, via email

This question does take us down two different paths. It’s a common local rule that a landscaped area encircled by a cart path is treated as being part of the cart path.

If that local rule is in effect, the player is entitled to free relief from all of it, cart path and landscaped area, under Rule 16.1b: He takes one club length from the nearest point of complete relief, no closer to the hole.

If it isn’t in effect, then you indeed get into the question of whether the player could reasonably make a stroke at the ball as it lies. If not, under Rule 16.1a(3) he doesn’t get free relief just because he’s standing on a cart path — either he has to try to play the ball as it lies or take unplayable relief.

If — this is a decision tree with many branches! — it is reasonable that he can get a club on the ball and make a stroke, then he would be entitled to relief, and it’s just a matter of where is the nearest point of complete relief. In theory, that point could be within the landscaped area, because that’s not part of the cart path in this situation. These are the 6 keys to Rory McIlroy's effortless swing

This mental golf scorecard is designed to improve your focus