I spent an entire season playing golf one-handed. Here’s what I learned. 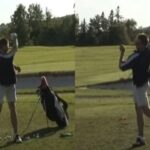 Breaking my arm during a basketball accident meant I could conduct a one-armed golf experiment.

My year of single-armed golf started on the StFX University basketball court. I was “engaging” with a group of students who were trying to jump as close to the foul line as possible and still make a dunk. As a student, I competed in track & field (member of 2002 National Championship team at the University of Saskatchewan) and had a respectable jumping ability.

On my last dunk, I had a little too much ‘out’ and not enough ‘up’ at take-off. I remember the last thought that ran through my head:

Squeeze it over the rim.

I don’t know if I made the dunk. I do know that my dunking hand caught the rim way too late. My feet swung up over my head and touched the rear-side of the backboard. For a moment I was completely inverted, and then plummeted head-first to the gymnasium floor in remarkably similar fashion to this:

I avoided a concussion but crawled away with the remnants of my pride and a grossly dislocated left elbow. My forearm bones jutted awkwardly out the backside of my upper arm, before I pulled them roughly back into place with my right hand. A skillful surgeon harvested the longest tendon from my right hamstring, weaved it through pre-drilled holes in my left elbow bones, and tied the ends together.

My left elbow was going to require months of rehab before it could safely participate in a golf swing. Not playing golf an unacceptable option, I decided to, simply, play golf only using my right arm.

Although I’m a left-handed golfer, I play racquet sports with my right-hand, so using right-handed clubs and hitting with my trail arm seemed like a viable option.

Before the mishap, my on-course driver clubhead speed was about 120 mph. Swinging my own left-handed driver, I could generate 100 mph of speed using only my lead (right) arm. Swinging a right-handed driver, I could achieve 104 mph using only my trail (right) arm. However, at those speeds, directional control while swinging right-handed was more challenging.

Nowadays I work closely with PING, and had I been working with them at the time, I would’ve opted for a set of ultra-light clubs, about half an inch shorter and with a bit more loft. PING does an amazing job fitting adaptive golfers, but that wasn’t my situation at the time, so I opted to go lead arm only and play my own left-handed clubs.

It took a little time to adapt, but pretty soon I began learning a lot about my swing mechanics. Here are few revelations:

Learning a new way to square the clubface

When your trail hand is on the club, it’s easy to use it to square the clubface. When you don’t have it there, figuring out how to close the face at high speeds is a lot more tricky.

One of my most practical research findings is that positioning the balance point of the club below the pulling force the golfer applies to the grip early in the downswing (or, in other words, the direction where you’re pulling the club early in the downswing) can help square the clubface. In simple terms: Allowing the club to shallow in transition can help square the clubface.

While this mechanism is not necessary in a regular golf swing, it is typically present in most elite swings, and was pivotal to my success with lead-arm only swings.

Not too much grip tension

Tension, in particular grip tension, was a performance killer. High grip tension seemed to promote an over-the-top move that resulted in a weak fade. With a lead-arm-only swing, a little forearm pronation in transition was helpful. It was challenging to squeeze the grip hard enough to maintain control, but still allow gravity to flatten the shaft a touch.

Don’t rely on your wrists for power

The relatively weak muscles crossing my right wrist could not be relied upon to generate enough torque (couple) to power a 100 mph driver swing. Instead, a heavy reliance was placed on my ability to apply a large pulling force with my arms and body to offset from the weight of the club and its balance point (moment of force) in order to generate speed. A water skier uses the same physics to sling-shot across the wake before hitting a jump.

In order to give more time for this effect to generate speed, I would play the ball further forward, close my stance to the target, and hit straight pulls. Near impact, the face closes faster than the path, so this extra bit of time in the downswing facilitated a more favorable face-to-path relationship at impact as well.

While my one-armed short game had the least negative impact on my score, relative to pre-injury performance, it also had the greatest positive transfer to my current game.

I entered my one-armed season as 2 handicap and managed to keep it in single digits throughout the year. I’m currently playing off a +1.6.