The secret to Dustin Johnson’s success, according to his brother and caddie Austin 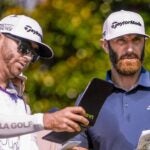 DJ's brother and caddie, Austin, says DJ has always been even-keel on the course.

Dustin Johnson has all the physical gifts you could ask for in a golfer: tall, strong, explosively athletic. But all of those talents aside, there’s been a renewed appreciation recently for DJ’s even-keel on-course persona — and how that might be the true key to his success.

“He’s smarter than people think,” Rory McIlroy said as Dustin Johnson was en-route to winning the 2020 Masters. “He’s switched on, more so than he lets on, more so than everyone in the media thinks.”

Austin Johnson, as DJ’s brother and caddie, sees this first-hand. As the most recent guest on Claude Harmon III’s GOLF.com podcast “Off Course” (which you can subscribe to on iTunes right here), Austin explains how it’s something DJ has always done.

“Even when we were kids and stuff, I never saw him throw a club. Never saw him get angry on the golf course, slam a club, anything like that.” he says. “His ability to control it is really impressive.”

At which point host and DJ’s coach, Claude Harmon, jumped-in with some interesting analysis about how he does it.

Forget the bad, only focus on the good shots

There’s been lots of Ted Lasso-inspired talk about DJ being the tour’s goldfish, but DJ’s ability to forget is only one half of it, Harmon explains. It’s also his ability to selectively remember only the good stuff.

“There have been loads of times where he’ll shoot one or two over…we’ll be in scoring area, I’ll say ‘do you want to hit balls?’ and he’ll always say: ‘Nah, I didn’t hit it really that bad today.'”

“He’ll say stuff like: ‘Yeah, I made a bad swing on this hole, but I’m good. I know what I need to do,” he says. “He never overreacts to the bad shots, he only focuses on the good shots. I think that’s a very unique personality characteristic.”

You can listen to the exchange starting at the nine-minute mark on Spotify below: