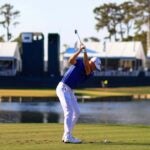 Going for the pin is tantalizing, but sometimes it's not smart.

The allure of pin-hunting is strong. I get it — there’s nothing better in this game than cozying an approach shot next to the hole for a tap-in birdie. But be honest: How many times does that actually happen during a round? A better question: How many times has taking dead aim at the pin resulted in a missed green (and dropped strokes)?

Since opening our doors in 1995, GOLFTEC has measured the swings of tens of thousands of golfers of every skill level. Our massive database grows every day as we continue to help find solutions for our students’ games. While technology has made improving swings and scores easier than ever, it’s the decisions that you make between shots that continue to be a critical barometer of success.

Over the years Tiger Woods has famously admitted that looking away from the pin and instead aiming for the center of the green has led to many of his 82 PGA Tour victories. Hidden in these statements is his belief that playing away from the center of the green is an opportunity rife with unfriendly implications if you don’t execute precisely, even for an all-galaxy ball striker like Tiger. In addition to the sage words of arguably the greatest golfer of all time, there are other reasons you should adjust your approach-shot strategy and honestly ask when and where you should aim at the pin. You might not like the answer, but it’ll make a lot of sense.

The stats department at GOLFTEC recently crunched some numbers, plotting the success rate of approach shots hit in thousands of rounds by thousands of golfers, some better than you and some not. The chart below neatly summarizes this research, outlining your best possibility of hitting the green depending on distance to the pin and, more importantly, the exact yardage when you should consider ignoring the pin and go for the center depending on your handicap. Pretty powerful stuff.

As the chart above shows, if you cannot break 100, your best target is always the middle of the green, unless you’re within 25 yards of the flagstick. If you typically shoot in the 90s, your best target is the middle of the green until you’re within 100 yards of the pin. (Even at 100 yards, however, it’s probably still risky to play toward the flag.) If your average score is in the 80s, you can stare down the pin from 135 yards and in but not from anything farther.

We arrived at these distance thresholds taking into account that the average green width is approximately 25 yards and the dispersion pattern of various handicap groups based on the data we aggregated. As crazy as it may sound, even a PGA Tour pro should take caution when aiming at the pin outside 172 yards. At that point it’s time to channel Tiger, think smart and aim for the middle of the green.