3 Augusta National shots that would give a 15-handicapper fits, according to Bubba Watson 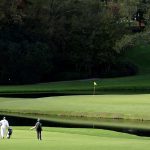 "You could be there for quite a while," Watson said of an average player trying to get this shot close at 15.

Bubba Watson is one of the game’s all-time great shotmakers. Bullet drives that take a corner like an IndyCar? Check. Soaring, tree-carrying flops? He’s got those, too. And who will ever forget the miraculous wedge shot he hooked 90 degrees out of the pines on Augusta National’s 10th hole to secure his first green jacket?

So who better than Watson to assess the toughest shots at Augusta National for a mere mortal — i.e., a nervy 15-handicapper who magically found him- or herself on the fabled course in Masters-grade conditions?

On a Monday morning call to promote Watson’s new partnership with the mobile game Golf Clash, the question was posed to the two-time Masters champ: Which specific shots at Augusta National would give a middling player the most trouble?

“Well…,” Watson said. He paused here for a moment, seemingly thinking through endless options. “Right off the top of my head I would say No. 6.”

The par-3. Interesting choice. The 6th — which plays 180 yards downhill, over patrons, to a four-pronged green guarded by a bunker front-left — doesn’t get much attention relative to many of Augusta’s other holes and is the least talked-about of the four par-3s. But when the pin is on the far-right shelf, Watson said, that hole position could easily result in a devastating number for a weekend warrior.

“If a 15-handicapper leaves it low-left and tries to putt up the hill, or if you leave it way right and try to chip back across the green and keep it on the top shelf, you could go back and forth there a bit, especially in fast conditions,” Watson said.

Adam Scott once likened hitting a shot close to that pin position to “trying to land it on the hood of a car. …There isn’t a good spot to miss.”

Watson also pointed to the hard-to-overstate difficulty of the downhill wedge-shot approach on the par-5 15th. The pond that fronts the green is the most obvious obstacle for a jittery amateur, but Watson says that’s not the most menacing threat. “Forget going into the water,” he said. “If you don’t catch it right and your ball goes over the green, now you’re chipping back toward the water and it brings in a whole new element.”

The shot becomes more challenging still when the pin is on the far left of the green. Watson agreed that a 15-handicapper might need a large bucket of balls (and maybe more) to get a wedge shot to stop close to that hole position.

For the purposes of this exercise, Watson was asked only for one shot, but he quickly served up two, and now here came a third:

“No. 12 is difficult for everyone,” he said of the devilish par-3 that has dashed so many Masters dreams. “Doesn’t matter what your handicap is.”

From April 8-10, Golf Clash users can compete in Bubba’s 9-Hole Cup, featuring a Bubba-themed ball, tee and other goodies.