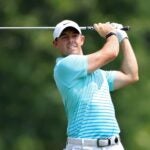 Rory McIlroy made a rare mid-week switch with his wedges.

When you’re one of the best golfers on the planet, you get whatever you want. During a normal tournament week, club requests are made and fulfilled in a matter of minutes when the equipment trucks are on site for the first three days.

But what happens when you need something and the trucks have already departed for the next event?

Rory McIlroy was forced to navigate this exact situation in Memphis. On the heels of an opening-round 72 where he caught two chips heavy with a lob wedge, the four-time major winner made a call to TaylorMade to sort out the situation.

The grind on McIlroy’s TaylorMade MG2 TW Grind lob wedge was designed for course conditions found at Kasumigaseki Country Club — site of the 2020 Olympic men’s golf competition — but not the Bermuda grass he encountered at TPC Southwind.

“I got here with a lob wedge with a sole that just completely was no good in Bermuda,” he said, “and I chunked a few chips on Thursday and I just was like, ‘I’m usually a pretty good chipper of the ball.’ I just went back to a sole that I’ve used before, especially that I’ve done well with in Bermuda conditions, and it’s been a little better around the greens the last couple days.”

McIlroy didn’t have a standard low-bounce TaylorMade MG2 lob wedge in his locker, so he asked TaylorMade to overnight him one for the second round. The wedge arrived in time for McIlroy to shoot three consecutive 66’s en route to a T12 finish. After losing more than three shots to the field around the green during the first round, McIlroy posted a positive SG: Around-the-Green number the rest of the way while ranking 6th in scrambling.

In the end, McIlroy only needed the correct wedge grind to allow his talent and skill to shine through.

Give it a try

The same week Will Zalatoris switched to a different arm-lock putter (more on that in a moment), Phil Mickelson decided to give the putting method a try as well. The reigning PGA Championship winner worked behind the scenes with Callaway’s Gerrit Pon and Keith Kingston to create an arm-lock version of his trusty Odyssey PM blade.

According to Callaway’s Johnny Wunder, who spoke to Pon about the creation, the putter was designed last winter and features a center of gravity location that was shifted towards the middle of the face.

“[W]e removed some weight from the heel by using aluminum and added some weight to the toe by using tungsten,” Pon said. “We also designed it with more offset and a bit more upright (than gamer) so that we wouldn’t need to bend it. Phil tried it briefly at Pebble when it was first done and then sidelined it until last week when he asked to have it set up as an arm lock.”

Mickelson’s PM Milled prototype blade is 40.75 inches in length with 6.5 degrees of loft and a 72-degree lie angle. He ranked 22nd in SG: Putting for the tournament with the new wand.

Will Zalatoris moved into a Scotty Cameron Phantom X 11 Tour mallet — featuring a prototype black topline — in Memphis after testing the putter extensively following the Open Championship. The 11 head shape has been a popular option on Tour this season, with Tour winner C.T. Pan and Max Homa using an 11.5 variation during different stretches.

“Players just love the way the 11 sits on the ground,” Titleist Tour rep Drew Page said. “Will’s putter has the same single bend shaft configuration, it’s just longer to accommodate the arm-lock stroke. When you put it down, it doesn’t open, it doesn’t close, it just sets up so easily.”

Zalatoris finished 9th in SG: Putting (plus-3.8) for the tournament after coming into the week ranked 150th in the statistical category.

As we’ve discussed in this space before, large loft gaps can create problems when it comes to certain yardages. Even the best players in the world need to tighten a gap or two on occasion, including major winner Webb Simpson. In an attempt to dial in his yardage gaps at the end of the bag, Simpson removed his 54-degree Vokey wedge and replaced it with 52- and 56-degree Vokeys .

“Webb had a pretty big gap between his MB pitching wedge (47 degrees) and that 54, which would often force him to throttle back on his pitching wedge or hit hard on the 54,” Vokey Tour rep Aaron Dill said. “This third wedge just tightens all that up and makes it a little bit easier now to let [caddie Paul Tesori] know that if they lay up to certain yardage that’s in that uncomfortable zone between that pitch and sand wedge, now they’ve got a club that fills that gap.”