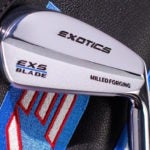 While Tour Edge previously focused mostly on the game-improvement player for its Exotics EXS 220 products, this new line of Exotics EXS Pro clubs for 2020 focuses on the better player.

“Everything about this line of clubs came from Tour player feedback and the over 100 PGA Tour Champions players who have played Tour Edge over the past few seasons,” said Tour Edge founder, president and chief designer David Glod. “They wanted anti-left, low and forward CG’s (center of gravity), low-spin penetrating ball flights, workable deep faces, adjustable weights to the extreme heel and toe, and more compact heads. We pulled that all together for the EXS Pro series.”

These designs started as prototypes for Tour players until the company realized there was a more widespread demand.

“At first, we were just designing prototypes for the pro tours, but along the way, we realized that the market has a need for these tour-inspired designs as a limited edition series,” Glod said. “With our previous Exotics launch, the EXS 220, we designed our most forgiving and stable clubs we’ve ever produced. The EXS Pro line is designed to bring the level up with the more traditional player with a faster swing speed who is looking for anti-left clubs with extremely low spin and penetrating ball flights.”

We break down each of the new designs below.

The EXS Pro driver has a pear shape and deep-face design that measures 440cc in size. It has an adjustable sliding weight, which the company calls a “FlightTrack,” in the rear portion of the head that houses a 6-gram weight (3-,9- and 15-gram weights available in a separate weight kit).

It has a sloped crown that’s designed to push CG low and forward to produce a lower-spinning head that Tour-level players need. According to Tour Edge, the EXS Pro driver spins 400 rpm lower than its previous EXS 220 driver. The EXS Pro also utilizes Diamond Face technology to increase ball speed, and it has dual-fiber crown technology to save weight from the upper section of the club head.

The bodies are made from 8-1-1 titanium, while the faces are made from Beta titanium. The club heads also house Sound Diffusion Bars on their interiors to fine-tune acoustic properties. Additionally, the adjustable hosels and head options allow for lofts ranging from 7.5- to 12.5 degrees.

“The EXS Pro fairway and hybrid are both titanium faces, which is a rarity,” Glod says. “The titanium faces are combo brazed onto a stainless-steel body, which saves a lot of weight. We take pride in offering the best available materials and we feel titanium adds that extra ball speed and feel the pros are looking for.”

They each come with what Tour Edge calls a “Flight Tuning System” by way of adjustable weights that influence a draw, neutral or fade trajectory bias. Like the EXS Pro drivers, the metalwoods and hybrids have a Sound Diffusion Bar inside their heads to enhance sound.

“One of the biggest takeaways we’ve seen in our testing is that the sound and feel of each of our EXS Pro metalwoods is pretty magical,” Glod said. “Skilled players are looking for the latest and greatest in adjustability for self-custom fitting and we’ve taken that to new levels with the EXS Pro, as well.”

The EXS Pro Forged and EXS Blade irons are each made from S25C carbon steel and CNC-milled for precision. They are compact head shapes with short heel-to-toe lengths.

“We used a lot of feedback from the PGA Tour and tested these irons with our professional staff, as well as with extensive robotic testing,” Glod said. “I believe that the milled forged iron connoisseurs out there are going to be very impressed with the playability we were able to combine with a traditional forged feel … these designs were made to be irons that are drooled over by the core golfer, not only in looks and feel, but in how they perform.”

Also made from S25C carbon steel, the EXS Blade wedges are forged and have CNC-milled faces for maximum spin. The CGs on the wedges have been raised for greater control, as well.

The sole grinds were designed to reduce bounce from heel to toe in order to increase versatility around the greens, and they have a “flared toe design” to further raise CG for a lower launch and more spin.

The lower wedges in the set (50-52 degrees) are designed with deeper and narrower grooves, while the higher lofts (54-60 degrees) have wider grooves.