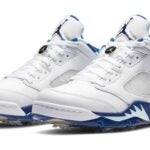 The inspiration behind Nike’s latest footwear capsule collection is twofold: The brand’s “Wing It” footwear design not only reflects this year’s U.S. Open venue, Winged Foot, it also pays homage to Nike’s namesake, the Greek goddess of victory.

Design details include a Winged Foot graphic in gold across the upper, bold blue striping throughout, and the Nike swoosh on the sock-liner.